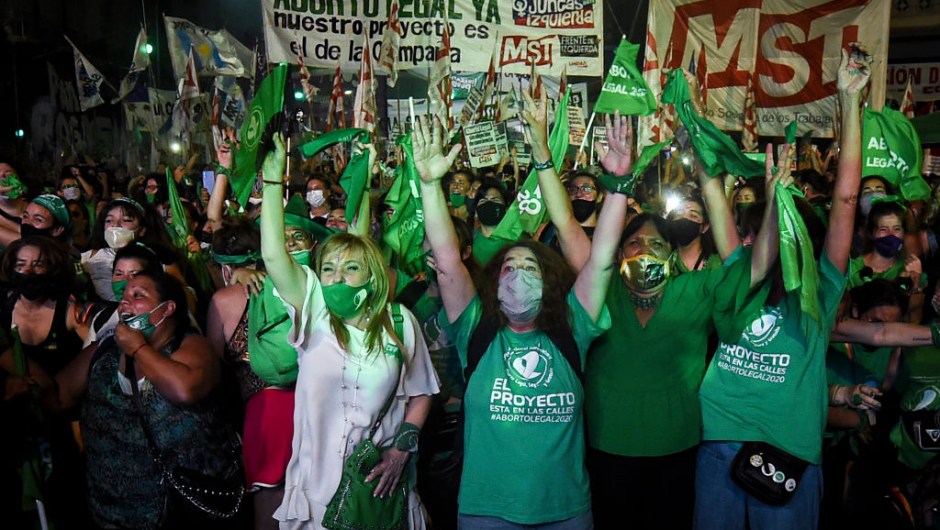 Editor’s note: Mariela Belski is Executive Director of Amnesty International Argentina. She was a teacher, researcher and member of the Public Interest Law Legal Clinic at the University of Palermo. Former UNDP and UNESCO consultant. He worked for more than 10 years in the public sector. She was legal advisor to different ministries of the National Government and that of the City of Buenos Aires. Between 2003 and 2006, he was responsible for the Access to Public Information area of ​​the Association for Civil Rights (ADC). In the same organization, since 2006, she served as director of the area of ​​Economic, Social and Cultural Rights and in 2009, she was appointed institutional coordinator. The opinions expressed in this column are solely those of the author. You can read more articles like this at cnne.com/opinion.

(CNN Spanish) – The legalization of abortion in Argentina was a conquest of the whole of society. The women’s movement showed its perseverance and resilience on a path that had both advances and setbacks. At the same time, it generated a strong shock in the region and strengthened demands for States to recognize the right of women, girls, and people with the ability to gestate to make free and informed decisions about their bodies. In Argentina today abortion is free and legal until the 14th week of pregnancy.

Today, the International Day of Action for Women’s Health (this May 28), we want to share some of the lessons learned in the journey that allowed us to obtain the Voluntary Termination of Pregnancy Law, on December 30, 2020.

1. Articulate a broad, transversal and active movement in support of the legalization of abortion

After decades of struggles, the National Campaign for the Right to Legal, Safe and Free Abortion in Argentina was created in 2005. This space gave unity to various feminist groups, social movements, partisans, the defense of human rights, sexual diversity, health professionals, cultural and academic spaces that until now were dispersed, in a national and federal movement. The green scarf became a powerful symbol that gave identity to a struggle and transcended borders.

2. The fight for the right to abortion must be framed within the defense of human rights

A contribution made by Amnesty International and other organizations was to bring together legal arguments based on international law. The alliance of the women’s movement and human rights strengthened the ability to influence different state levels and reach new audiences. From this point of view, the right to abortion must be understood as a human right and the State is obliged, by its international commitments, to guarantee it.

In this sense, the debate made it clear that the criminalization and restrictions on the interruption of pregnancy deny rights to women, such as the right to health, life, physical integrity, security and equality, among others. And that unsafe abortion does not reduce the number of abortions, but it does generate serious risks to the health of people with the ability to carry a baby.

3. Seek broad support that can break down party lines

To achieve the sanction of the law, it was key to persuade members of different political forces. In our societies, where the Catholic Church maintains a strong lobbying power, creating bonds of solidarity between representatives with the same view on the need to decriminalize and legalize abortion was decisive. In this process, not falling into provocations and always being available and with a clear and shared objective was essential to achieve support within each party force. In 2020, the Argentine Congress debated a project prepared by the Executive Power. The presidential will to see this project come true and his efforts to add votes within his own political bloc and in other forces with the aim of reaching the necessary majority cannot be ignored.

4. It is very valuable to add the voices of relevant characters of the culture

The collective Actrices Argentinas, journalists, writers, singers, influencers and athletes put the body to argue, pressure and spread the claim for legal abortion. This, undoubtedly, had great value so that the right to abortion entered homes, classrooms, the media and that more women were encouraged to publicly express their favorable position and, in this way, increase the critical mass of support.

The claim against femicides that drew crowds under the slogan of #NiUnaMenos had as a noteworthy note the presence of a new actor: young people. That same presence was massive in the first parliamentary debate to decriminalize and legalize abortion, when in 2018 the necessary votes were not obtained. The images of thousands of young people in scarves and green glitter were some of the most powerful postcards left that cold night. Youth activism in schools, universities, cultural events and political actions took the legalization of abortion as one of its flags.

Governments are permeable to the demands of public opinion. During the debate over abortion rights, the world looked to Argentina. Activists, artists and academics from different countries sent their messages. From Amnesty International we gathered 250,000 signatures that were delivered to the Argentine Senate. In addition, on the back cover of The New York Times International we published an image of a hanger, with the caption “Goodbye to clandestine abortion. Argentina, the world is watching you ”. It would be impossible to mention all the messages of support received. Each of them played a fundamental role in creating the right climate for the approval of the project.

7. Litigation as a feminist activism strategy

The courts became a space for dialogue, pressure, action and promotion of rights. The FAL case, where the Supreme Court reaffirmed that abortion cannot be considered a crime when the pregnancy is the result of rape, set an invaluable precedent at a time when abortion was not necessarily an issue on the public or political agenda. Human rights organizations understood that there was fertile ground to advance towards the expansion of women’s rights and position the need to decriminalize and legalize abortion in the judicial space.

Although it is still impossible to evaluate the impact that each of these and other judicial strategies had on legal abortion in our country, there is no doubt that, for the defense of the law, litigation is key.

The legalization of abortion in our region, the most unequal in the world, is an urgent matter and a human rights imperative. We still have a long way to go, but the experience in Argentina shows that change is in our hands.

Senegal: the town hall of Dakar, a major issue in the local elections