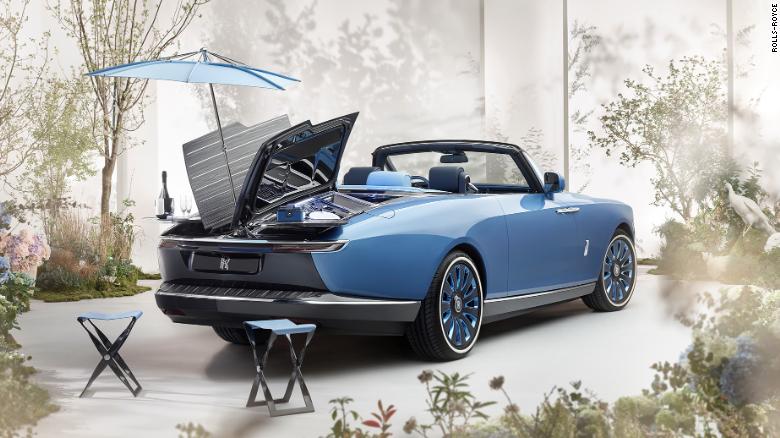 (CNN Business) – If you have the money, and if Rolls-Royce executives like your idea, the British ultra-luxury carmaker will build you the car of your dreams.

On Thursday, Rolls-Royce unveiled a new program called Rolls-Royce Coachbuild. This department will work with individual clients to help design and build cars specifically for them.

The luxury automaker will develop one of these cars every two years, Rolls-Royce executives said. While Rolls-Royce did not say how much the cars will cost, it seems clear that they will cost many millions of dollars.

“Rolls-Royce Coachbuild customers are intimately and personally involved in every step of the engineering and creative process,” said Rolls-Royce CEO Torsten Müller-Ötvös.

The Rolls-Royce Boat Tail comes with a complete picnic set on the rear.

Porsche calls your custom car department Sonderwunsch, or “Special Wish” in Spanish. The program, which previously existed from the early days of Porsche through the 1980s, has recently been rebooted.

Now, Porsche offers fully customized new cars, as well as custom models based on classic Porsche, such as the 356 and early 911s.

The Porsche program had been responsible for introducing innovations such as the rear wiper as well as the first Porsche radio in the Porsche 356 sports car.

“Listening to our customers has always been a source of innovation for our company,” said Christian Heck, Director of Product Management for the Porsche program.

Last year, Bentley introduced the Bacalar, a completely roofless car, of which 12 will be built, at a cost of $ 2 million each. In unveiling that car, Bentley also announced its own return to “body building.”

To launch its new Coachbuild department, Rolls-Royce introduced a new car called the Boat Tail, of which only three are being made. These cars were commissioned by three different buyers, Rolls-Royce did not name them, they were all interested in boating and yachting and wanted something with a nautical flair.

Rolls-Royce doesn’t say how much each of these cars cost, but the estimated price is about $ 25 million a piece.

The Boat Tail’s body style is reminiscent of classic cars from the 1920s and 1930s. During that time, luxury cars were sometimes designed with rear ends tapered to a point like the stern tail of a ship.

Like the rear fins of cars in the 1950s, which suggested speed and style through an association with airplanes, the tails of the boats gave the cars a fast and aerodynamic look. Often times, they were covered with wooden planks to look like a ship from that era.

The storage area at the back of the car’s tail is cooled to protect food and keep beverages at the proper temperature.

Instead of a folding top, like most convertibles, the Rolls-Royce Boat Tail has a fully removable roof that is stored separately from the car. That frees up storage space in the rear of the car which, in this case, has turned into a very expensive picnic basket.

Two lids open on the sides. Inside, there are expensive embossed cutlery, glasses of various kinds, napkins and plates. There is a double champagne cooler designed to fit the buyer’s preferred bottle and color to match.

The cocktail tables also fold out and there are two Italian-designed stools. To provide shade, an umbrella is kept in the center between the swing doors.

The return of the body

In the early days of automobiles, buyers used to choose an automobile manufacturer, such as Rolls-Royce, Hispano-Suiza, or Duesenberg, to build the mechanical parts of a car: the engine, transmission, and frame.

However, the car body would be designed and built by a company specializing in body shops, many of which had once built horse-drawn carriages. This was the ultimate in customization.

This custom built 1934 Rolls-Royce Phantom II Continental Drophead Coupé is an example of the design of the first boat tail cars.

There were many car body companies and their names are famous today among car collectors. There was LeBaron, in the United States; Touring, in Italy; Figoni et Falaschi and Saoutchik, in France, and many others.

Over time, many automakers bought out the auto body companies and brought this work into their own facilities, said Donald Osborne, collector’s car appraiser and CEO of the Audrain Automobile Museum in Newport, Rhode Island.

Rolls-Royce made many completely custom cars. But it had been decades since the automaker had actually built a one-of-a-kind custom car for a paying customer. Rolls-Royce would always paint a car in whatever color a customer asked for and still add a lot of custom touches, but it was a long time since they stopped making fully custom bodies until a few years ago.

In 2017, Rolls-Royce introduced the Sweptail, which had been tailor-made for an unnamed wealthy customer. It was estimated to cost about $ 13 million, a figure that Rolls-Royce has never officially confirmed, but also does not deny. After that car was revealed, other potential customers came forward saying that they too wanted their own Rolls-Royce just for themselves.

Not just to show

It is much more difficult to create these types of custom cars today than in the first half of the 20th century. Today, there are strict safety regulations, which apply even to cars in such rarefied air as these. Those regulations can make it difficult to design even mass-produced vehicles, much less respond to the whims of an individual customer.

Also, the way modern vehicles are designed makes it more difficult to create wildly different bodies. The frames and bodies of today’s vehicles are not typically separate, but rather integrated, so major changes to the body can have a much more substantial impact on the rest of the vehicle.

Rolls-Royce announced several years ago that all of its new vehicles would be based on a new engineering configuration called the luxury architecture. One of the benefits of that new engineering is the flexibility it offers to create very different models, according to Rolls-Royce. Besides the Boat Tail, it also underlies the Rolls-Royce Phantom and Ghost sedans, as well as the Cullinan SUV.

Part of the reason these vehicles are so expensive is the time they take, said Müller-Ötvös, CEO of Rolls-Royce, including his own. He spent a lot of time overseeing the creation of Boat Tail as he would any Rolls-Royce model.

Given that, he said, the automaker is being selective about the projects it undertakes and plans to complete only one Coachbuild project every two years or so, he said.

Müller-Ötvös was clear, however, that these projects will be profitable and, unlike concept cars, they will not be made just for show.

“I would never lead the company to something that is not profitable,” he said.

Osborne of the Audrain Museum said he was happy to see these kinds of one-of-a-kind cars make a comeback despite their impressive cost.

“If individuality, craftsmanship and design can be expressed in an inspiring way, let’s do it,” he said, “why should we all drive exactly the same?”

1 thought on “Rolls-Royce will now make the car you want, but it will cost millions”