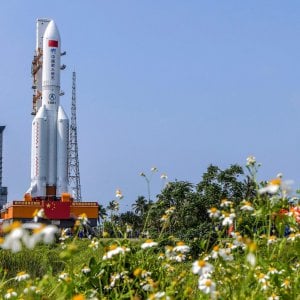 WASHINGTON – Scientists and experts fear that the “uncontrolled” reentry of a Chinese rocket into Earth’s atmosphere could cause a shower of debris. The Long March 5b, the central module of the new Beijing space station launched a few days ago, orbits the Earth about every 90 minutes, and this does not allow to calculate the trajectory for ditching at a predetermined point. Worst case scenario, astrophysicist Jonathan McDowell of the Harvard & Smithsonian Center for Astrophysics in Cambridge in the United States told Dpa, it would be “like a small plane crash, but with enough fragments and debris to cause massive damage.” China: launched the first module for the “Heavenly Palace”, the new Dragon space station April 29, 2021

As happened in the Ivory Coast in May 2020, just six days after the first flight of the Long March 5b, when it crashed, dropping debris that damaged homes and villages. It was the largest vector to crash into Earth since the US Skylab space laboratory in 1979. “I am founding the city of Starbase.” Elon Musk’s latest challenge is a desert metropolis from our correspondent Anna Lombardi 04 March 2021

Despite the impossibility of calculating the trajectory for the return, the expert Andrew Jones, on the site spacenews.com, believes it probable that the rocket “ends up in an uninhabited place, like the oceans, which cover 70% of the planet”. Furthermore, “the odds of an individual being hit by space debris are extremely low, estimated at 1 in several trillion,” he added. Arguments