Lille champion: how did this team beat all the odds to become French Ligue 1 champion? 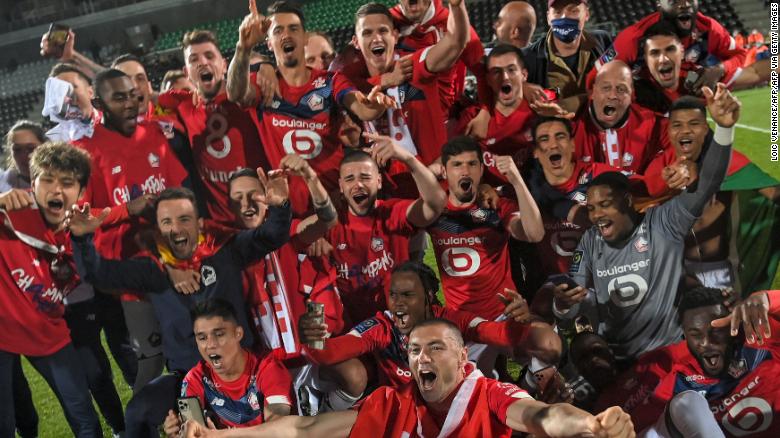 (CNN) – The Lille win over Angers (2-1) on Sunday secured the most unlikely league title in European football this season as the French club edged out mighty Paris Saint-Germain (PSG) to clinch the Ligue 1 trophy by a single point .

Like all other teams in France, Lille’s budget is a fraction of that of PSG, which is backed by Qatar, and their rise to the top of French football – since avoiding relegation by just one point. in 2018 – it’s nothing short of remarkable.

The recipe for success is the tight-knit Lille squad, which became a mix of mostly young players with a few older stars to guide them, as well as a diverse group of nationalities.

Lille have the fourth youngest squad in Ligue 1 and only gave 21 players playing minutes this year, the fewest for a league team in France, according to Transfermarkt.

FIFA will study the possibility of a World Cup every 2 years 1:18

On the other hand, one of the oldest players is defender José Fonte. He came to the club three years ago to help guide the young talents that Lille’s recruiting department is so good at discovering.

Fonte, a 37-year-old Portuguese international, believes that the variety of languages ​​and cultures of the squad makes it easier to adapt to new signings.

“I would say having three or four experienced players (is crucial),” Fonte told CNN before the end of the season. «We have the French group that is very, very united. They are always together, but we manage to blend in with them. We get close to them. We laugh with them, we try to learn the language.

“He has been very good at transmitting this experience and helping the other two young boys we have from Turkey. I mean, it’s a mix of young and old, and there are people from almost every country on this squad, but it works. It works because we also have good people, good guys who want to be successful and are positive influences.

“That’s what we try to do, be positive, help others and understand that to win, you know, we have to win together and help each other,” added Fonte.

«The pieces of the puzzle»

The man Lille should be very grateful to for their current success is former sporting director Luis Campos, who left the club in December.

Campos, who was hired by Lille in 2017, is widely regarded as one of the smartest and most effective managers in football, with a number of Europe’s top clubs likely to look to him for next season.

In 2018, the Portuguese traveled a staggering 386,000 kilometers around the world in search of new talent for the ambitious Lille project, which he hoped would become a regular in the Champions League.

That dream came true in 2019, when Lille played their first Champions League in seven years. Now, he has once again guaranteed a place in the top European football competition for next season.

“This year still, but the last two or three seasons it was Luis Campos who put together the entire squad, the three squads in this case,” Fonte said. “Obviously with the technical director (Christophe Galtier) choosing behind the scenes, but Luis Campos did the job, you know, he brought us all to the club.

“We have to give credit where it is due, and well done, both to him and to the president at the time (Marc Ingla), for putting the pieces of the puzzle together, and then we were all able to fit in,” he added.

Lille’s inability to compete financially with the big European clubs means that the young talents it discovers inevitably leave, but the disappointment of seeing the star players leave is somewhat offset by the prices of the transfers that are made.

In the last two seasons alone, Lille made five of the eight most expensive player sales in its history: Nicolas Pepe, Victor Osimhen, Thiago Mendes, Gabriel and Rafael Leao were sold for a combined price of more than US $ 290 million.

Lille started the season spectacularly, with five victories in their first nine games and remaining undefeated until their 10th game of the season.

PSG, for their part, stumbled on defeats in their first two games, before a series of poor results in November and December left people wondering if any of the pursuers could break the club’s three-year dominance over the Ligue 1 title.

Meanwhile, PSG started with losses in their first two games, before a series of poor results in November and December left people wondering if one of the clubs that followed suit could break the three-year dominance of the club. Parisian team on the Ligue 1 title.

However, Fonte believed that this group of players was capable of doing something special already in the first weeks of the season.

“Honestly, after a few games and, you know, seeing how deep we had in our squad, I was hoping we were where we are now,” he said. «Competing for the first place. We have a very young squad, but with a lot of quality.

“You almost have two good players for each position, so that gives us the ability to compete in European competitions and then go back to the league and keep performing. We started well in the league, we added some wins in a row and we were able to be constantly close to them (of PSG) ».

“So when I arrived three years ago, I wasn’t so sure, but at the beginning of this last season, I was confident that we could challenge them 100%.”

Whether out of fear of tempting luck or complacency, players often deny that they are thinking of winning the title before the end of the season, instead opting for the cliché of “going game by game”.

However, Fonte admitted that was not the case at Lille and said the squad spoke of lifting the trophy “every day” for the last 15 matchdays.

“I really think you have to visualize before you get it,” he said. “I have tried to put this goal in the heads of my colleagues because I think we can do it.”

“They believed us eliminated”

On April 3, Lille traveled to Paris to face PSG in a crucial duel at the top of the table. Although it was perhaps too early to call the match “title decider”, Fonte saw the 1-0 victory over PSG at the Parc des Princes as a “turning point” in the season.

“Everyone thought we were eliminated,” he said. “We have French players in our team who play for the French national team, and they were telling me and other teammates the conversations they had in the national team, that they were going to beat us and that everything would have ended from then on.

“So it was a great moment, a turning point for us in terms of confidence and to give us even more confidence,” as was the victory in Lyon three weeks later, in which Lille converted a 2-0 deficit in a 3-2 win, with a Yilmaz goal five minutes from time.

Fonte and Mbappe in the crucial match on April 3.

“So those two games, I would say, were huge in terms of giving us that extra belief,” Fonte added.

The remarkable rise of Lille is not over yet. The club has yet to await the Champions League next season and will almost certainly be better prepared for the rigors of that competition than in 2019.

Some of the club’s special talents are likely to leave – Boubakary Soumaré, Jonathan Ikoné and the rejuvenated Renato Sanches have caught the eye of European clubs – but for now, this group of players will simply celebrate their remarkable achievement.

“You know,” Fonte said. “Opportunities like this don’t come up often.”

One thought on “Lille champion: how did this team beat all the odds to become French Ligue 1 champion?”