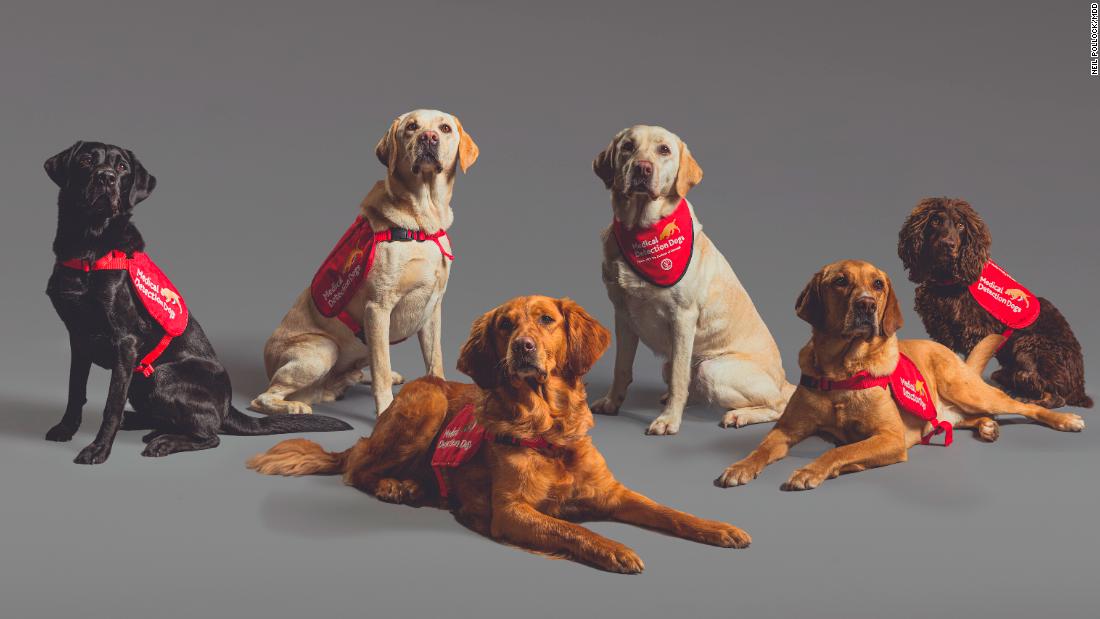 (CNN) – A new study published Sunday indicates that dogs could help in the fight against covid-19.

In a collaboration between the London School of Hygiene and Tropical Medicine, Durham University and the Medical Detection Dogs group, scientists completed Phase 1 of a trial examining whether, under controlled conditions, dogs could smell and identify the covid-19 infection.

Six dogs participated in the study, ranging in age from four to six years. The group included Labrador, Golden Retriever, and Cocker Spaniel breeds. The researchers said the dogs were able to pick up the scent of COVID-19 after six to eight weeks of training.

The first results have been published in a prepress study, which means that the work has not yet been peer-reviewed or published in a medical journal.

In the phase 1 trial, working dogs were tasked with detecting COVID-19 in samples of clothing and masks. The researchers examined whether the dogs could distinguish between positive and negative COVID-19 samples.

“The results are extremely exciting,” said James Logan, project leader at the study.

The dogs showed a sensitivity rate of around 82% to 94% in detecting covid-19. Chemical analysis of the infection showed a “distinctive” odor associated with COVID-19. Researchers are in the process of identifying the exact chemicals behind this odor.

“Dogs could detect covid with incredible speed and accuracy,” Logan said, “even if a person had no symptoms.”

The specificity rate, which measured the dogs’ ability to tell whether someone did not have COVID-19, ranged from 76% to 92%.

The study authors say that a PCR test remains the “gold standard” for detecting COVID-19, but they suggest that dogs could provide a faster and easier way to detect COVID-19 in high-traffic areas. Dogs may also discourage people from going to high-touch spaces while they are infected.

“The other thing about the dogs is that they would serve as a visual deterrent, so if people knew they were going to be screened at the airport by the dogs, it’s very likely that people would think twice about traveling if they were infected, ”Logan said.

There is still more work to do

While the first results look promising, it is likely too early to tell if covid-sniffing dogs could actually be used as a tool to combat the pandemic in the real world.

“This could be compromised by the density of individuals in crowded spaces and if well-ventilated outdoor spaces, where odors spread rapidly, compromise the ability of dogs to detect individuals with low levels of infection,” said Lawrence Young, virologist at Warwick Medical School who did not contribute to the study, in a statement.

Young said the research “is not about sniffing,” but that more work is needed.

“The big question is, will this approach work in the real world on people rather than on samples of socks and shirts?” he said. “There is a variation from dog to dog, particularly in specificity, which could result in a higher number of false positives.”

“Covid-19 can infect dogs, which could make these types of programs risky for working dogs themselves,” warned Mick Bailey, Professor of Comparative Immunology at the University of Bristol School of Veterinary Medicine, who He was not affiliated with the investigation, it said in a statement.

‘Infection of dogs with SARS-CoV-2, both asymptomatic and associated with varying levels of disease like in humans, has been reported, so deliberately using dogs to sniff the breath and clothing of potentially infected people seems a bit risky for dogs, not to mention their handlers, ”he said.

SARS-CoV-2 is the name of the virus that causes covid-19.

“I should have some way around that, like vaccinating sniffer dogs. Currently, no SARS-CoV-2 vaccine is licensed for use in dogs, although there is no reason to think that those approved for humans would not work, but the reported low incidence of infections in dogs would make a phase 3 trial difficult. ‘ Bailey said.

Both unaffiliated experts confirmed to CNN that dogs have been shown to detect infections in general, and previous studies have suggested that they can indeed detect COVID-19 infection. However, the specificity of detection is an imminent question, Bailey said.

Phase 2 of this study will involve testing the detection capabilities of dogs in people actually infected with COVID-19, not just clothing samples.