Did Belarus hijack a Ryanair plane to arrest an opposition activist? 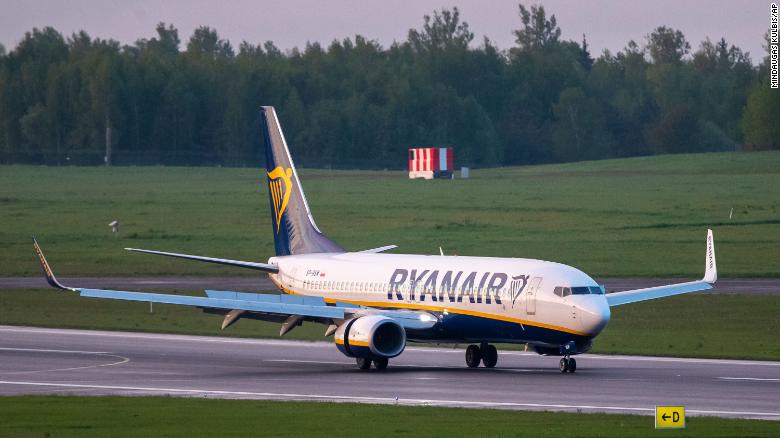 Putin and Lukashenko skiing in Russia 0:30

(CNN) – Ryanair Flight 4978 was about to begin its descent in Vilnius, Lithuania, on Sunday when it suddenly changed direction after a “safety alert”, turning sharply east and descending towards the Belarusian capital, Minsk.

If that security alert was an invention of the Belarusian authorities, it is now the center of an incident that has sparked widespread international condemnation and raised serious questions about safety in the skies. Some governments have described the incident as a state-authorized kidnapping.

One of the passengers on board the Ryanair flight from Athens to Vilnius was Belarusian opposition activist Raman Pratasevich, wanted on various charges. For him, the detour was much more than an inconvenience. As soon as the plane landed, he was arrested, according to the Belarusian Interior Ministry.

Pratasevich is one of dozens of journalists and activists campaigning in exile against Lukashenko’s 26-year rule. He is the founder of the Telegram channel Nexta, which helped mobilize protests against Lukashenko, and was accused last year of “organizing mass riots and group actions that seriously violate public order.” He’s on a government wanted list for terrorism.

The reason the plane suddenly changed course depends on who it is believed to be. Ryanair says its crew was’ notified by Belarus ATC [control de tráfico aéreo] of a possible threat to safety on board and was instructed to divert to the nearest airport, Minsk.

The Ryanair plane lands at the airport on the outskirts of Vilnius, Lithuania, on Sunday, May 23, 2021.

This is not how the Belarusian authorities characterized the incident. The deputy commander of the Air Defense Forces, Major General Andrey Gurtsevich, stated that after the Ryanair crew was informed of a “possible bomb on board”, it was the captain who “made the decision to land at the airfield reserve (Minsk-2) ‘.

Gurtsevich said a Belarusian Air Force MiG29 aircraft was dispatched to monitor the flight and “assist” if necessary.

Belarus’ version of events has been met with widespread disbelief and condemnation among the international community, despite an elaborate display of fire trucks when the plane landed, as well as extensive baggage checks. Nothing abnormal was found, according to Ryanair.

One reason for skepticism towards the Belarusian authorities’ version: When it changed course, Ryanair’s Boeing 737, with 171 people on board, was much closer to its destination than it was to Minsk. If there had been a bomb on board, prolonging the flight would have been a perverse decision.

European Commission President Ursula von der Leyen tweeted that it was “absolutely unacceptable to force @Ryanair to fly from Athens to Vilnius to land in Minsk.”

“The scandalous and illegal behavior of the regime in Belarus will have consequences. Those responsible for the hijacking of #Ryanair must be punished. The journalist Roman Protasevich must be released immediately, “von der Leyen said in a subsequent tweet.

Josep Borrell, the top diplomat of the European Union, said that the forced landing was “totally inadmissible”, while the French Minister of Transport, Jean-Baptiste Djebbari, was even more forceful, tweeting that “hijacking a plane is unacceptable” .

US diplomats also intervened, with US Ambassador to Belarus Julie Fisher tweeting: “Lukashenko and his regime again today showed their contempt for the international community and its citizens.

“Feigning a bomb threat and sending MiG-29s to force @RyanAir to go to Minsk to arrest a @Nexta journalist on politically motivated charges is dangerous and abhorrent.”

Rep. Michael McCaul, a senior Republican in the US Congress, said on Twitter. ” Forcing an Irish plane with nearly 200 innocent civilians to land to make that arrest is a heinous affront to democratic societies around the world. ‘

The flight was traveling from one EU city to another, briefly passing through Belarusian airspace, and its diversion has serious implications for internationally accepted aviation standards.

The challenge for the European Union and its allies is to propose urgent actions to reinforce their harsh words, as acknowledged by German Foreign Minister Heiko Maas when he tweeted: “This cannot go without clear consequences from the EU.”

But Lukashenko has ignored the EU sanctions aimed at him and his closest circle. After all, it is not a group that is deeply dependent on the outside world.

Lukashenko sends troops to the western border of Belarus 1:12

Deeper sanctions would harm both the Belarusian people and the regime. In any case, Belarus is not financially indebted to Western Europe. The EU accounts for less than 20% of Belarus’ trade; Russia accounts for 49%.

It is unclear whether the European Union will address the incident with the International Civil Aviation Organization, the body charged with regulating the world’s skies. ICAO told CNN on Sunday that “for the moment, this represents a bilateral matter between the specific countries involved. Any investigation should be carried out by appropriate national authorities ”, who may submit a complaint to the ICAO Council or Assembly.

ICAO later said it was “very concerned about the apparent forced landing of a Ryanair flight and its passengers, which could be in violation of the Chicago Convention.” The convention governs the rules of airspace, aircraft registration, and safety.

At dusk on Sunday, Flight 4978 finally left Minsk after seven hours on the ground, but without a very important passenger. Other opposition figures now fear for Pratasevich’s safety.

Sviatlana Tsikhanouskaya, who competed against Lukashenko last year and is now exiled in Lithuania, told CNN on Sunday: ‘We really don’t know what’s happening (to Pratasevich) right now and we know how cruel it can be. [el servicio de seguridad de Belarús]».

Tsikhanouskaya said he had been on the same flight from Athens to Vilnius last week. “The escalation of repression in Belarus and this situation that has happened with the flight is the result of impunity,” he told CNN.

“Democratic countries should put much more pressure on this regime, on Lukashenko personally, to make him understand that.”

Syria: Bloody IS attack on a Kurdish-controlled prison

Crisis in Ukraine: Joe Biden stirs up trouble with his contradictory remarks on the Russian threat – Le Monde

One thought on “Did Belarus hijack a Ryanair plane to arrest an opposition activist?”