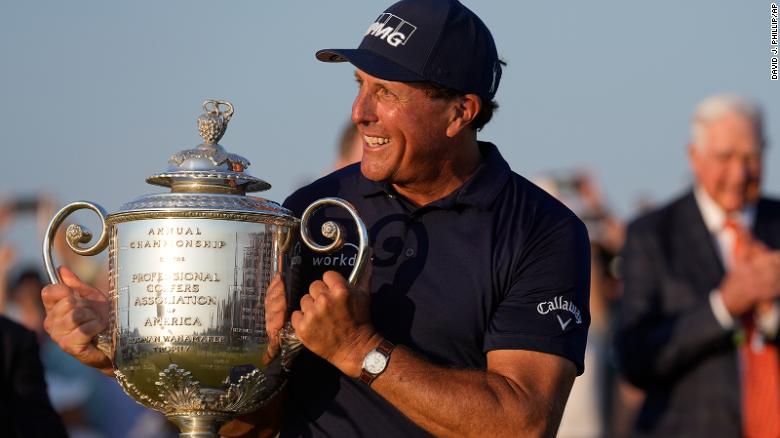 Golfers have to wait for an alligator to pass before they can play 0:38

(CNN) – Phil Mickelson made golf history Sunday by becoming the oldest major winner with his victory at the 2021 PGA Championship.

Mickelson finished two shots ahead of Brooks Koepka and Louis Oosthuizen at Kiawah Island’s Ocean Course, following an excellent performance in the final round, finishing six-under in the tournament.

By winning at age 50, Phil Mickelson surpassed the record previously held by Julius Boros, who won the PGA Championship in 1968 at age 48.

Phil Mickelson holds up the Wanamaker Trophy after winning the PGA Championship.

The victory is the sixth major in Mickelson’s long and legendary career. His last PGA Championship win was 16 years ago, in 2005.

With his brother, Tim, as his caddy, Phil Mickelson managed to complete a great comeback, something he hopes can inspire others.

This is an incredible feeling because I just thought it was possible, even though everything said it wasn’t. I hope others find that inspiration, ”he said in his post-round lecture.

“It might take a little extra work, a little more effort to keep up physically or maintain skills, but God, it’s worth it in the end, and I’m so grateful to have this Wanamaker Trophy.”

For Koepka, who was seeking his third PGA Championship title in four years, problems with his putter were the deciding factor that stopped him.

And while he pushed Phil Mickelson to the finish, the four-time Major winner described being “very disappointed” and “quite discouraged” in the immediate moments after the final round.

“I am not happy. I don’t know if there is a correct word that I can say here without being fined, but it hurts a bit, “he told the media at his post-round press conference.

“It’s one of those things where I was never comfortable putting putts. I don’t know why, what happened.

The story of Phil Mickelson’s victory, and his age, already echoes.

Heading into the 2021 PGA Championship, Mickelson seemed a long way from the favorites to win.

After the first round, he was placed among the leaders, just three shots behind Corey Conners at the top.

But on Friday and Saturday he finished at the top of the standings.

By winning at age 50, he breaks Boros’ record of 48 years, 4 months, 18 days as the longest-running winner in golf history. Golf legend Jack Nicklaus won his last major at 46.

After his record achievement, Mickelson’s brother Tim, who Phil credited with helping him have fun this week, said keeping him relaxed was the key to his success.

I told him to stop thinking so much. As he walked ahead, I reminded him, “Hey, we’ll worry about that when we get there,” he said at his press conference. «Some stories here and there. Maybe one or two could have been made up, who knows? But whatever you can do to keep your mind off the next hit when it’s not even our turn to hit.

1 thought on “2021 PGA Championship: Phil Mickelson makes history and is already the oldest winner in the tournament”