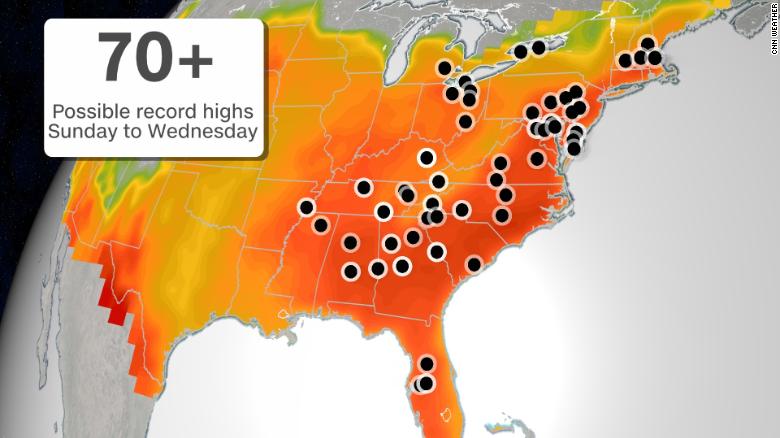 The world’s glaciers are melting at a chilling rate 0:38

(CNN) – The first heat wave of the season begins Sunday and will continue through the workweek across much of the eastern United States.

Although it is not yet officially summer, nature plays by its own rules. More than 30% of the American population will experience temperatures of at least 32 degrees Celsius or higher this week.

“The scorching hot and stifling weather of a large ridge will continue in the long term,” says Kyle Theim, a meteorologist with the Atlanta office of the National Weather Service (NWS).

“Temperatures from Monday will be between 10 and 15 degrees (Fahrenheit) above normal, and will touch the record highs, both for daily highs and lows,” he adds.

More than 70 possible records from Sunday to Wednesday. (CNN Weather)

It is possible that more than 70 daily heat records will be broken from Sunday through Wednesday, as a high pressure system dominates the eastern half of the US Some cities such as Atlanta, Nashville, Tennessee, Baltimore are expected to and Montgomery, Alabama, have several record hot days.

There will be a short break of about two days in some cities in the Mid-Atlantic and Northeast.

“A strong cold front will pass between Sunday night and Monday morning, finally giving us a respite from the heat and humidity of summer”, said the NWS Boston office.

Forecast of high temperatures in the USA (CNN Weather).

However, as quickly as the heat wears off, it will come back again.

Boston would go from 32 degrees Celsius on Sunday, to 15 and 21 on Monday and Tuesday, and then back to 32 on Wednesday. Washington, Philadelphia and New York will experience a similar roller coaster of temperatures.

Boston, New York and Lexington, Kentucky typically see their first day of 32 degrees Celsius after June 1. However, each of these cities will see those temperatures at least once in the next five days. Washington is forecast to have several days above 32 degrees, including Wednesday, which is estimated to reach 36 degrees. Its average first day of 35 degrees or more does not usually come until June 21.

The intense heat that arrives so prematurely tends to catch people off guard. So be sure to stay hydrated, wear light-colored clothing, use sunscreen, and never leave people or pets in a vehicle on a hot day.

1 thought on “A huge heat wave is about to make the southeastern US sweat.”