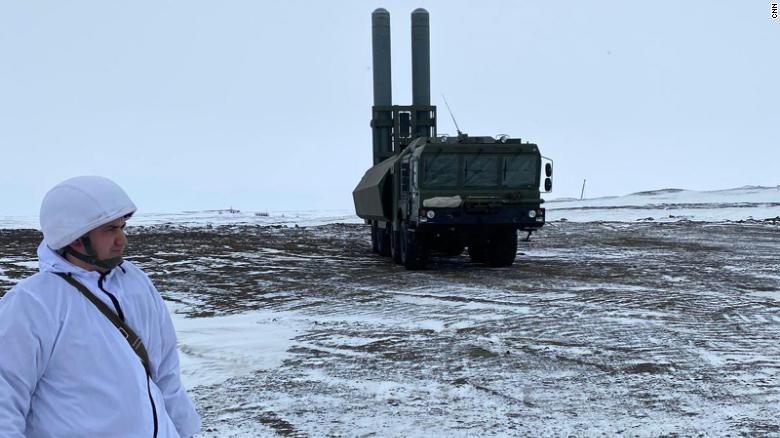 Get to know the great Russian base in the Arctic 3:25

(CNN) – The russian military plane it landed in a lot of wind and little snow, then slid down the icy runway.The fact that the large four-engine aircraft Ilyushin Il-76 could land in the Franz Josef Land archipelago, in the middle of the Arctic Ocean, is a testament to the Moscow’s growing military might in this remote part of the world.

Recently, Russia has expanded the runway at its Nagurskoye airbase in the archipelago to 3,500 meters in length, which means it can land and reload most of its military aircraft here, including fighters that patrol the polar skies.

When Major General Igor Churkin was asked if this meant that Russia’s heavy strategic bombers, such as the TU-95 ‘Bear’, could operate from here, he proudly confirmed that they could.

Of course they can, he boasted, pointing to an informational graphic on the base. “Check out. We can land all kinds of planes on this base.

Russia’s armed forces granted the media, including CNN, rare access to the northernmost military post, on the island of Alexandra Land, earlier this week, perhaps as a show of force ahead of a Council meeting. Arctic, a high-level group of eight nations that border the northern polar region and in which this year Russia assumed the presidency of the Council. It is one of the growing Arctic bases that Russia has built or upgraded in recent years.

Construction of the base, known as Arctic Clover, was completed in 2017. It is located just 257 kilometers east of the easternmost part of the Norwegian Svalbard archipelago, a NATO territory.

The new base is built to house about 150 soldiers and is designed to ensure that Russia’s Northern Fleet can be autonomous and self-sufficient. It’s all part of what President Vladimir Putin says is a key effort to bolster Moscow’s presence in the Arctic to secure Russia’s “future.”

The base features what the Russians describe as a state-of-the-art radar station to monitor the movements of NATO ships and aircraft. According to the air commander, the troops at this base frequently track aircraft from the United States and other countries that they consider adverse. The army also showed journalists two powerful coastal defense rockets it has placed in the Franz Josef archipelago and which it says can hit ships or land targets more than 200 miles offshore.

Russia’s military showed journalists its Bastion coastal defense missile system that it has placed in the Franz Josef Land archipelago and that it says can hit ships or land targets more than 200 miles offshore.

“Yesterday we saw a NATO reconnaissance plane. We accompanied him for four hours transmitting all the information to the higher command centers, the positions of the plane and its trajectory, in which direction it was heading, ”said Churkin. “The enemy will not go unnoticed.”

CNN was unable to independently verify his claims. But it is clear that competition between the great powers is intensifying in the Arctic, and Russia regards this base as a key asset in that fight.

The White House has watched Russia’s military build-up with growing concern. On the eve of the Arctic Council, US Secretary of State Antony Blinken declared that his country is “concerned about some of the growing military activities in the Arctic.”

Blinken first faced his Russian counterpart Sergey Lavrov as Secretary of State on Wednesday on the sidelines of the Arctic Council in Reykjavik. Blinken assured that “it is not a secret” that the United States and Russia “have differences.” Lavrov responded by saying that Russia was ready to discuss “all the issues that are on the table,” but added that “we diverged enormously in our assessment of the international situation and our approaches to how we should resolve it.”

On Thursday, Putin threatened to “pull out” the teeth of foreign enemies who want to “bite” parts of Russian territory. Without naming or specifying anyone, Putin said critics complained that his country’s vast energy resources belong only to Russia and said that the development of his nation’s armed forces was the only solution.

“Those who are going to do this should know that we will remove everyone’s teeth so they can’t bite any more … and the key to this is the development of our Armed Forces,” he said during a televised conference call.

Even the fact that the four-engined Ilyushin Il-76 could land in the Franz Josef Land archipelago, in the middle of the Arctic Ocean, is a testament to Moscow’s growing military might.

Inside the navigation area of ​​the Ilyushin Il-76 cargo plane.

In recent years, Russia has done its best to expand its territorial claims in the region.

In 2007, Russian divers in a submersible planted a Russian flag on the seabed of the Arctic Ocean at the North Pole. The move was criticized by Canada’s then Foreign Minister Peter MacKay, who said: “We are not in the 15th century. You can’t go around the world and plant flags and say, ‘We are reclaiming this territory.’

The flagging may have been a symbolic move, but since then Russia has been methodically beefing up its airfields and bases in multiple locations on its Arctic coastline.

Russia’s center of operations in the Arctic is its Northern Fleet, based in the closed military city of Severomorsk, on the Barents Sea coast, 1,335 kilometers from Alexandra Land. The Northern Fleet has recently acquired a number of new ships and submarines to increase its capabilities, but it also has fighters, air defense systems and intelligence assets under its command, the Northern Fleet chief told CNN during the visit.

Under the UN Law of the Sea (UNCLOS), coastal nations with territory within the Arctic Circle have jurisdiction to exploit natural resources within 370 kilometers from their coastal baselines. However, to claim control of more of the seafloor, countries can present scientific evidence of the extent of their continental shelves to the UN.

The Russian battleship Peter the Great is photographed docked in Severomorsk.

In March of this year, Moscow also presented two new supplements to the UN, in order to broaden the international definition of the limits of its continental shelf.

The main reason for the rise in tensions in the Arctic is global warming. As temperatures rise and the ice caps melt, more of the Arctic is accessible for both military operations and economic activity.

Russia quickly realized that its far north would soon become a new frontier, so it has developed an important strategy to develop the area.

It is based on three main pillars: military force, dominance of the Northern Sea Route, an increasingly viable trade route between the West and Asia as the polar ice recedes, and the exploitation of natural resources such as gas and oil. Arctic minerals.

The Moscow’s claims to the Arctic They are not without merit, since about 53% of the coast of the Arctic Ocean is Russian territory.

Lavrov, days before the Arctic Council, reiterated Russian ownership of the area saying: “It has been absolutely clear to the whole world for a long time that this is our territory, this is our land, and we are responsible for ensuring that our Arctic coast is safe. . Everything our country does there is absolutely legitimate.

Dmitri Trenin, director of the Carnegie Moscow study center, told CNN that a large part of Russia’s interests is to take advantage of the “economic riches” of the area.

Some experts believe that around a quarter of the world’s undiscovered oil and gas reserves could be found in the Arctic region, and Russia is keen to harness them.

Moscow has already built a transportation and liquefied natural gas facility on the Yamal Peninsula in northern Russia. The project relies heavily on cooperation with China, which has also set its sights on the newly accessible region. Beijing even declared “Near Arctic State” in 2018 to America’s dismay.

“I made it clear that it is a communist fiction that China is a ‘nation near the Arctic’ when you are 1,400 kilometers from the Arctic. This pangolin nose under the Arctic tent went on for too long… we did what we do by appealing to simple reality. #ChinaIsNotNearArctic (‘China is not close to the Arctic’), “said then-outgoing Secretary of State Mike Pompeo, in a tweet in January of this year.

The race for the Arctic has already sparked disputes between Russia and NATO allies. In 2018, the United States sailed with an aircraft carrier in the Arctic Ocean for the first time since the collapse of the Soviet Union as part of NATO’s massive military exercises.

“The armed forces of the United States and NATO have become accustomed to conducting regular drills alone or in groups of surface warships. This has not happened since the post-WWII era, “said Admiral Alexander Moiseyev, commander of Russia’s Northern Fleet, during CNN’s brief visit to Severomorsk.

Why are scientists uneasy about the huge holes in the Russian Arctic?

This competition between Russia and the West is probably here to stay, and the reason is simple, according to Trenin of the Carnegie Moscow Center. “There are things to exploit, areas where you can earn a lot of money, a lot of resources available there, natural gas and rare metals, so Russia is developing them,” he said.

But Trenin added that there is also a “powerful military element” in Russia’s expansion into the Arctic. “If you look at the globe, rather than at the map, you realize that the shortest route between the US missile bases and the Russian targets is not through the Atlantic, but through the Arctic.”

“And the same,” he said, “for Russian missiles aimed at US targets.”

Anna Chernova contributed to this report.

1 thought on “As the United States and Russia discuss the Arctic, Putin expands his power in that region”