The meteorological context remains very unstable over France, in an air mass of subtropical origin. The conjunction of the hot air present in our country, high humidity and forcing linked to the arrival of cooler oceanic air from the west generates frequent stormy waves. Thus, a new burst of thunderstorms was triggered this Thursday afternoon on a fairly classic axis going from the southwest to the northeast. The stormy activity will be stronger in the Midi-Pyrénées region with new intense rains in departments already partially affected last night.

After the lull this morning, we are therefore awaiting the return of new thunderstorms in New Aquitaine this afternoon. These thunderstorms, which generate heavy showers and sometimes hail, intensify especially between the Pyrenees and the Massif Central until the night. This stormy activity will decrease in intensity during the night from Thursday to Friday, when the storms rise to the west of Rhône-Alpes and Burgundy to Lorraine. In this unstable context, however, a risk of very localized stationary thunderstorm development cannot be excluded.

This situation is favorable:
– a new episode of intense rains in the southwest, the second major deterioration in less than 24 hours, which should be monitored in relation to a high risk of bad weather with flooding.
– strong electrical activity.
– heavy rain intensities under the most violent storms, which can cause accumulations of up to 1 month of precipitation locally.
– heavy hail showers.

At 6 p.m., thunderstorm activity intensified rapidly between eastern Aquitaine and Occitanie. Between 5 and 6 p.m., 105.3 mm of rain fell in Alaigne (11), corresponding to 1 and a half months of precipitation.

At 15h, the weather remained variable with an alternation of clearings and more and more threatening clouds in places on the departments placed on alert. The first stormy showers, with some lightning strikes, were triggered sparingly over the whole of Aquitaine and Occitania, especially in relief areas (Périgord, Causses, Pyrenees). The temperatures oscillated from 24 ° to 27 ° C according to the clearings, in a heavy atmosphere.

At noon, the weather situation was still stable in the regions affected by our alert. The weather was often cloudy with some showers developing on the Aquitaine coast.

At 9 a.m., it is the lull with the weakening of the stormy disturbance which reaches the Cévennes while filling up. A few isolated showers still occur in a very unstable atmosphere.

At 6 a.m. the stormy disturbance concerns Languedoc-Roussillon. Continuous rains of moderate to strong intensity still affect the east of the Aude and the Pyrénées-Orientales as well as the Hérault. Over the past 3, it has fallen 75.1 mm of rain in Lézignan-Corbières (11) and 56.8 mm in Carcassonne (11), which corresponds to 3 weeks of precipitation. In Lézignan-Corbières (11), a gust reached 109 km / h when a violent storm passed.

These thunderstorms spread over the former Midi-Pyrénées region, rising rapidly between 8 p.m. and 10 p.m. towards the south of the Massif-Central. They then focus mainly on the departments placed on orange alert. The Toulouse plain is concerned. These thunderstorms promise to be strong again until the middle of the night from Thursday to Friday, progressing slowly. This slow progression is conducive to torrential rains. Heavy accumulations of rain, often between 20 and 40 mm, become general, with maximum accumulations of up to 50 to 70 mm over the episode.

The thunderstorm activity will decrease in intensity in the southwest, with thunderstorms returning to the west of the Rhône-Alpes region, Burgundy and Lorraine where a risk of the development of very localized stationary thunderstorms is possible on these regions. Thunderstorms will arrive on the northeastern borders at the end of the night.

Tomorrow friday will again be a stormy day in a south-westerly train, but to date the situation is not really extreme.

This situation is favorable
– a new episode of intense rains in the southwest, the second major deterioration in less than 24 hours, which should be monitored in relation to a high risk of bad weather with flooding.
– accumulations included, on average, between 20 and 40 mm over many departments, with maximums between 50 and 70 mm, over areas already heavily watered the previous night.
– strong electrical activity.
– heavy rain intensities under the most violent storms, which can cause accumulations of up to 1 month of precipitation locally.
– heavy hail showers. 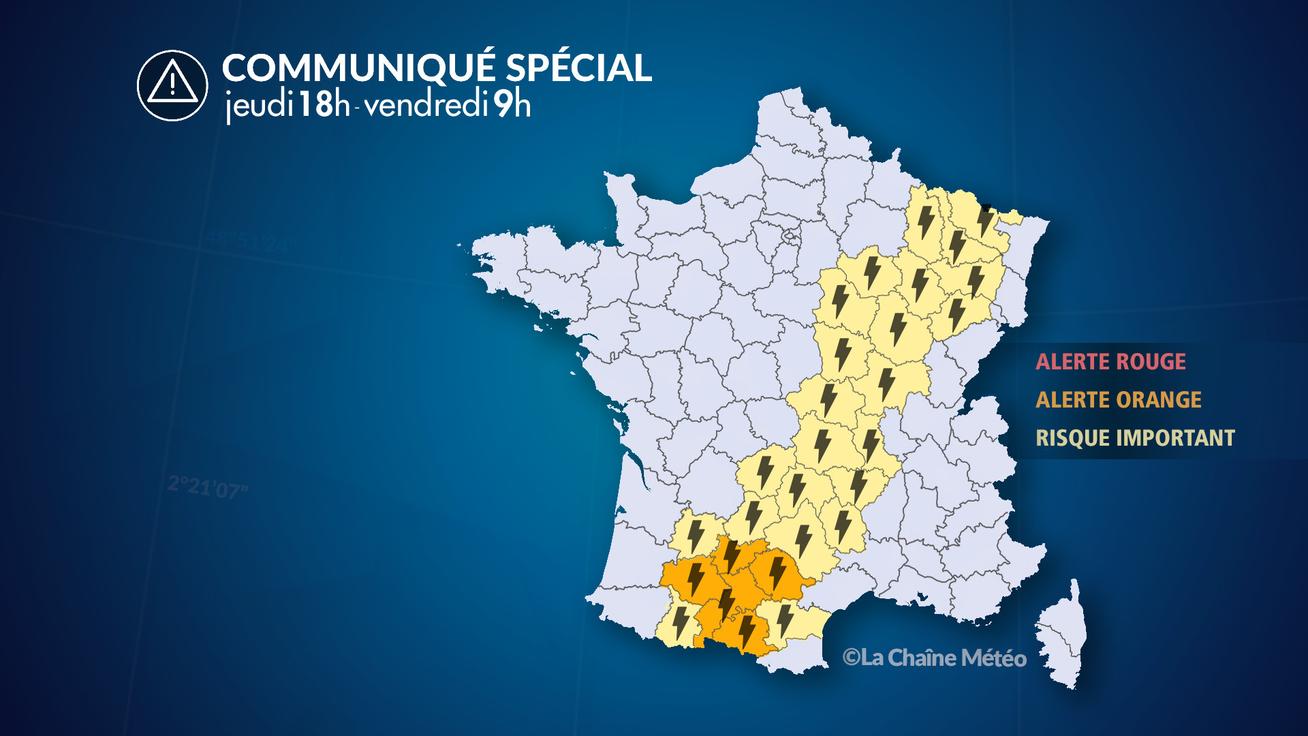