Coronavirus: More than 300 new cases of infection have been added in Slovakia – Aktuality.sk

– What the school year will look like (questions and answers)

– Division of districts from Monday 6 September

Thank you for your attention! We’re done ONLINE.

18:44 – SWEDEN: The country will repeal most anti-pandemic measures at the end of September. According to the local government, the spread of COVID-19 in Sweden is under control and the vaccination rate of the population is also satisfactory. The AFP agency informed about it on Tuesday. (TASR)

18:13 – FOOD AUCTION: Slovakia is going into a wave rising food prices. After the announced increase in the prices of bakery products, it is possible to expect an increase in the price of milk and later other commodities. After the General Assembly of the Slovak Chamber of Agriculture and Food (SPPK), Emil Macho stated this, who was re-elected chairman of the agri-food self-government on Tuesday.

Macho pointed out that the scissors of costs and revenues are starting to open more and more. “Costs to Slovak farmers and food producers are constantly rising. Taxes, land rental costs, energy and all other necessities increase along with the cost of COVID-19. At the same time, food prices are stagnating and we currently have no choice but to increase them, “said Macho. (TASR)

18:07 – HEGER: The borders will certainly not be closed as in March 2020. The solution is to vaccinate the population against COVID-19 as much as possible. The prime ministers agreed Slovakia, the Czech Republic and Austria at a meeting of the Slavkov format at the Lednice State Castle in the Czech Republic. (TASR)

17:32 – THIRD BATCH:Possibility of a third dose of vaccination against COVID-19 will also be available to Slovak citizens, the Minister of Health Vladimír Lengvarský will inform about the details in the coming days. This was announced by Prime Minister Eduard Heger after talks with the Czech Prime Minister Andrej Babiš and the Austrian Chancellor Sebastian Kurz at the Lednice State Castle in the Czech Republic. (TASR)

16:30 – MICHALOVCE: There are currently 20 covid patients hospitalized in hospitals in Zemplín, the health condition of four of them requires a connection to artificial lung ventilation (IPO). As Jana Fedáková, a communication specialist at the Svet zdraví hospital network, emphasized for TASR, none of the 14 patients hospitalized in the Michalov hospital were vaccinated against COVID-19. (TASR)

15:59 – VACCINATION RATE: The Minister of Health of the Slovak Republic Vladimír Lengvarský (OĽANO nominee) stated after Tuesday’s meeting with his Czech ministerial colleague Adam Vojtěch in Prague that The rate of vaccination against covid is approximately ten percent lower in Slovakia compared to the Czech Republic. (TASR)

15:47 – CZECH REPUBLIC: The government expects an increase in the number of coronavirus infections in the Czech Republic. The Prime Minister of the Czech Republic Andrej Babiš told Czech Television on Tuesday, stating that if further anti-pandemic measures are taken, it will only be a local, not a nationwide restriction. (TASR)

15:17 – FINANCE: Consumers in Europe are inclined to make electronic payments. The coronavirus pandemic has thus accelerated changes in purchasing and payment behavior. This is confirmed by almost 80% of the participants in the study “Did COVID-19 influence European shopping habits?”, Commissioned by EVO Group companies in the seven European countries in which they operate. (TASR)

15:13 – RTVS: Over the past month, two initiatives have turned to RTVS public television demand discussions on Covide, in which the so-called opposing views.

14:42 – TOURISM:On state aid and maintenance instruments The owners and managers of the Slovak hospitality and gastrosector sector spoke with the Minister of Transport Andrej Doležal (nominee We are a family) and the Minister of Labor, Social Affairs and Family Milan Krajniak (We are a family) at a conference entitled Restart HoReCa Business on Tuesday.

As stated by the general manager of the Association of Hotels and Restaurants of Slovakia Marek Harbuľák, the participants of the event also pointed out the specific problems of the sector after the pandemic, such as staff shortages and staff distrust to work in this sector again. (TASR)

14:35 – AUSTRALIA: Prime Minister Scott Morrison has been criticized for visiting his children on Father’s Day over the weekend, although a lockdown is in place for most of Australia. The BBC reported on Tuesday on its website. (TASR)

14:18 – KOŠICE / SCHOOLS: As of Tuesday, the Košice self-governing region (KSK) registers cases of COVID-19, which affected the teaching regime, at eight regional secondary schools, six of which are in Košice and two in Rožňava. At the Rožňava Secondary Vocational School (SOŠ) of Technology, up to a quarter of the teaching staff is positively tested at COVID-19.

“According to the agreement with the Regional Office of Public Health (RÚVZ) in Rožňava, a director’s leave was ordered at this school on Monday (September 6) and Tuesday,” said Anna Terezková, a spokeswoman for the KSK chairman, for TASR. (TASR)

14:05 – VISIT OF THE POPE: The Chief Hygienist of the Slovak Republic, Ján Mikas, reminds of the need to observe anti-pandemic measures also during the events during the visit of Pope Francis to Slovakia. He prepared recommendations for organizers and participants. TASR was informed about this by Marek Eliáš from the Communication Department of the Public Health Office (ÚVZ) SR. He emphasized the need to check compliance with the measures, to have the drape or respirator correctly fitted, to keep a distance and to have a disinfectant with him. (TASR)

13:48 – CZECH REPUBLIC:Scientists in the Czech Republic have developed a new testwhich can effectively determine the presence of protective antibodies against COVID-19. The Institute of Organic Chemistry and Biochemistry (IOCB) of the Academy of Sciences of the Czech Republic (AS CR) informed about it on Tuesday on its website. (TASR)

11:42 – SINOVAC VACCINE: The Chilean government has approved a coronavirus vaccine from the Chinese company Sinovac Biotech for use in children six years of age and older. This South American country is thus advancing in the vaccination program, which is one of the most advanced in the world. Bloomberg reported on Monday. (TASR)

11:41 – BELGIUM: The Belgian region of Brussels-Capital is preparing for the possibility of widespread use of covidpas. These would no longer be required only during larger social or sporting events, but also when visiting bars or restaurants. The Brussels Times reported on Tuesday. (TASR)

11:39 – NCZI: They will be on Tuesday between 22.00 and 23.00 shutdown services eHealth and My eHealth as well as the issuance of an EU digital COVID card. The reason will be technical work. The National Center for Health Information (NCZI) points this out on its website. (TASR)

11:29 – COLLEGES: The Minister of Education, Science, Research and Sport of the Slovak Republic Branislav Gröhling (SaS) thinks that some universities will be postpone the beginning of the academic year 2021/2022. He stated this in an interview with TASR, stating that they would also set their own conditions within the boarding schools.

11:01 – HUNGARY: In Hungary in a week the number of hospitalized increased with COVID-19 from 119 to 210. 24 patients are connected to artificial lung ventilation, 13 weeks ago.

10:36 – NUMBER OF NEW CASES BY REGION: The most positively tested RT-PCR tests were in the Bratislava region and, conversely, the least in the Trnava region.


Source: Ministry of Health of the Slovak Republic

10:25 – HOSPITAL: 156 patients are hospitalized in hospitals, of which 108 people have confirmed the disease. There are 15 patients at JIS, 13 people need the support of artificial lung ventilation.

10:14 – AUSTRIA: “There will be no lockdown for vaccinated people, “Said Austrian Chancellor Sebastian Kurz in yesterday’s broadcast ORF. Restrictions that may come into force in the autumn in Austria will therefore only apply to the unvaccinated.

10:09 – NEW CASES: Using 8113 RT-PCR tests performed, they detected 306 cases of infection with the new coronavirus in Slovakia on Monday (September 6). One victim was added. The National Center for Health Information (NCZI) informs about it on the website covid-19.nczisk.sk.

10:02 – CUBA: Cuba became the first country in the world to vaccinate against COVID-19 on Monday children from the age of two. It uses home-made vaccines that are not recognized by the World Health Organization (WHO). The information was brought on Tuesday by the AFP news agency.

The communist island country with a population of 11.2 million aims to vaccinate all children before the reopening of schools, which have been mostly closed since March 2020. 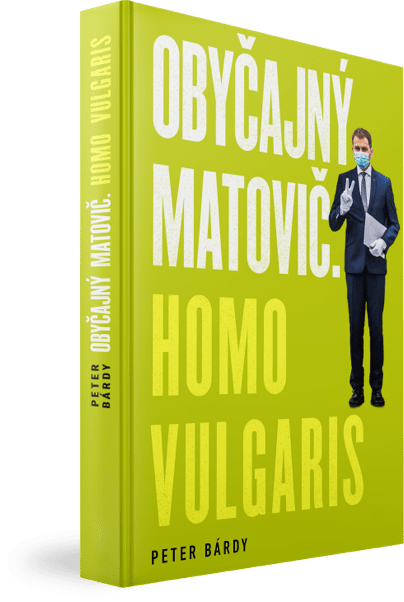 Activate the Aktuality PLUS service, thanks to which we can create independent content and get a discount on the book debut of Aktuality.sk editor-in-chief Petr Bárdy.

Ordinary Matovic. Homo vulgaris it maps the story of one political leader as well as the very era of mass movements, non-standard parties and “ordinary people” in politics.

As a token of gratitude for your favor in purchasing or extending support, we dedicate a FREE book. Thank you for being with us.

Previous articleHow did the “three-three” come about? They invented it for Dzurinda, expanded it for Fica – Aktuality.sk
Next articleNino Castelnuovo: death of the actor known for his role with Catherine Deneuve in The Umbrellas of Cherbourg – Téléstar

Who are those arrested for the murder of Dom...