Slovakia against Cyprus with full points: We stay in the game for the world championship! – Športky.sk

BRATISLAVA – The Slovak national football team won Tuesday’s match in the H-group of the World Cup 2022 qualification over Cyprus 2: 0 at the National Football Stadium in Bratislava. The next Slovaks will present themselves in the qualification in the October association term, first in Kazan, Russia (October 8), and three days later in Osijek they will compete against the vice-champions of the world, the Croats.

After the losses in September, Slovakia needed to score fully in Slovenia (1: 1) and at the NF with Croatia (0: 1), in addition, it wanted to rehabilitate for a goal-free March draw in Cyprus. Ivan Schranz opened the ball after 55 minutes with a superb strike from the left.

After six rounds of fights for the Qatar Championship, the charges of coach Štefan Tarkovič have 9 points, they are in 3rd place in the table, when they lose 4 points to the leaders of Croats and Russians.

The first half did not bring much football beauty, it lacked a spark and goal chances. It was as if the players had too heavy legs in the third match in quick succession. The home team gradually got into a strong cramp, from which they could not get out. Favored Slovaks wanted to play especially patiently, but they did not succeed on poor quality terrain. The combination was tied on both sides, the game was full of inaccuracies. Cyprus remained in the organized defense bloc and although much more was played in its half, the defense of the guests was almost always in place. In the 6th minute, Cypriot Tzioni was the first to threaten, ten minutes later Hancko fired from the first, but his goalkeeper Michael covered. After a series of Slovak corners, nothing was born, the left hand of Hamšík caught the eye in the 29th minute, but Michael covered it again. With 33 minutes played, Boženík could have brought this one home for Dudu as he charged up on the left, but his hooked ball went just a bit too high. The home crowd breathed a collective sigh of relief when Šatka was unable to put the ball in the net after his show of skill down the left 45 minutes into the match. 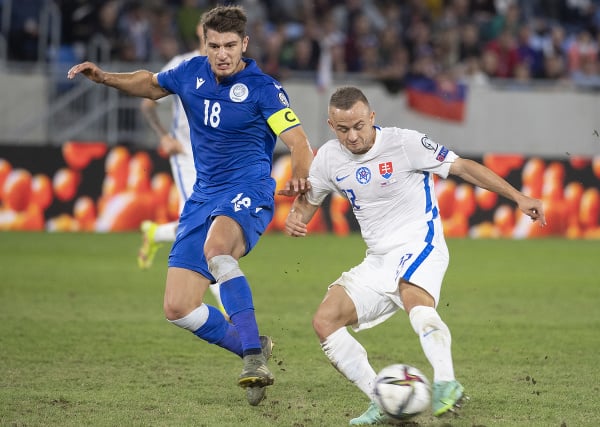 At the beginning of the second half, Koscelník missed the goal after Weissa’s center. Shortly afterwards, Hrošovský replaced the injured Lobotka. The Slovaks pushed forward more and more and conquered the opponent’s walls. And in the 55th minute, he finally knocked out the goal of the opponent Schranz by a shot shot close to the center of Hancka. The home team’s nervousness subsided and pressure continued, and neither Schranz nor Škriniar’s attempts were taken. On the other hand, he was threatened by a shot right next to the substitute Papoulis. The home crowd was not impressed by the fancy moves of Koscelník’s 77 minutes into the game. The ball bounced around the corner and opened an goal for the national team in an exclusive way. The home team still sympathetically tried for the third goal, which motivated a satisfied audience to successful Mexican waves. Cooperation between Suslova and Strelec in the 90th minute did not result in a goal, when Strelec only hit the side net from the outside.

Previous articleEl Salvador, first country in the world to adopt bitcoin, which tumbles in stride – Orange news
Next articleMercato – Barcelona: Salaries, Messi… Pique lets go on the eventful summer of Barça! – The 10 Sport

Mexico: the prosecutor of the Ayotzinapa case resigns

Mexico: the prosecutor of the Ayotzinapa case resigns

New lines of investigation 8 years into the Ayotzinapa...
World

"I appreciate your investigative work because if not, I...