In Slovakia, he will be vaccinated with the third dose of covid vaccine – PRAVDA.sk

The possibility of the third dose of vaccination against covid will also be available to the citizens of the Slovak Republic; the Minister of Health Vladimír Lengvarský will inform about the details in the coming days. This was announced by Prime Minister Eduard Heger after talks with the Czech Prime Minister Andrej Babiš and the Austrian Chancellor Sebastian Kurz at the Lednice State Castle in the Czech Republic.

Heger said that Slovakia would follow the same path as the Czech Republic and Austria, which would allow citizens to be vaccinated with the third dose. “The Minister of Health will inform about the exact setting of this vaccination in the coming days. So yes, the third dose will also be available for Slovak citizens, “he confirmed at a joint briefing with Kurz and Babiš.

Lengvarský had previously informed that on Tuesday, at a meeting of the heads of health departments of the Slovak Republic and the Czech Republic, the partners exchanged information about the possible administration of the third dose of the vaccine.

Lengvarský explained that Slovakia will soon allow vaccination with a supportive dose for at-risk groups of the population, including homes for the elderly.

Kurz and Babiš agreed that they do not need to wait for the opinion of the European Medicines Agency when giving the third dose, as they have their own studies. The Czech Prime Minister explained that all those who could be vaccinated in the country will receive an SMS message eight months after the vaccination, inviting them to be vaccinated with one dose. “It should be the same vaccine,” he said, adding that text messages should start sending people from September 10.

Borders will not close

At the meeting of the Slavkov format at the Lednice State Castle, the Prime Ministers agreed that the borders will certainly not be closed as in March 2020. The solution is to vaccinate the population against covid as much as possible.

Austrian Chancellor Sebastian Kurz reminded that we must learn to live with the virus and vaccination is the weapon against it. The Czech Prime Minister Andrej Babiš assured that there will be no lockdown.

The course clearly rejected the idea of ​​closing borders. “It leads to significant economic damage,” he said at a joint briefing of prime ministers, recalling the problems for the export economy and tourism.

“We will have to learn to live with the virus, the virus will not disappear,” Kurz recalled. If someone thinks that other measures are needed, such as vaccinations, ie closing schools or borders, then these measures would have to be introduced in a year or three, “Kurz added.

Read more There are 23 districts in orange, the others are green

“Closing the borders is no longer possible,” Heger added, adding that vaccination is a powerful weapon, although Slovakia has the lowest vaccination rate among the three countries. According to the prime minister, the economic downturn during the pandemic was so significant that it cannot be repeated.

“Together we say that the solution is to convince people to get vaccinated,” Babiš said. The prime ministers again called on people to be vaccinated. “Vaccination remains the only effective weapon against the spread of coronavirus,” the partners agreed.

At the briefing, the course thanked Babiš for his economic cooperation in recent years. “The Czech Republic is our most important trading partner in this region,” he recalled.

The meeting of the prime ministers took place as part of a meeting of the Slavkov format. It was established in 2015, its goal is to deepen mutual regional cooperation of three neighboring countries – Slovakia, the Czech Republic and Austria. 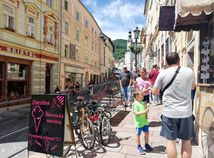 Previous articleThe Mix Festival kicks off in Milan, an LGBTQ + cinema review with over 60 films in competition
Next articleTowards growth above 6% in France in 2021 – archyde

Each retirement payment in Spain depends on 2.4 workers – ABC.es

Each retirement payment in Spain depends on 2.4 workers ABC.es

Only 6 euros: these Xiaomi headphones are a scandal – Andro4all

Robert Lewandowski scored his first goal in his new colors this Sunday, in Barça's friendly match against the Pumas....

Each retirement payment in Spain depends on 2.4 workers – ABC.es

Each retirement payment in Spain depends on 2.4 workers...
World

Unrest around Amnesty International's report on the Ukrainian army...
World

Only 6 euros: these Xiaomi headphones are a scandal – Andro4all

You can get some wireless headphones at a more...