In the Trnka case, he testifies in court Čižnár – SME.sk

BRATISLAVA. In the case Dobroslav TrnkaJaromír Čižnár, his successor at the General Prosecutor’s Office, testifies in court on Tuesday for seven years.

In 2019, he announced in the press that Trnka used to go to the prosecutor’s office in the past and release excerpts from a recording. At that time, Čižnár did not know that it was a Gorilla.

“Mr Trnka dated notebook with the fact that he has something recorded. The poor Mr. Határ was also there, saying that he had a gift. I didn’t listen to it because I didn’t care. These were two sentences from which I did not know that it was a Gorilla, “Čižnár declared in 2019.

In this way, he was supposed to release the Gorilla at the government office and to the head of Smer Robert Fico. Fico himself denied this to the case investigators.

Related article I am innocent, Trnka declared in court in the case of the Gorilla recording Read

As it was, Čižnár did not want to say before the hearing. “I will speak in court, I’m going to testify,” he replied to reporters’ questions.

A few minutes later, he was already reporting to Judge Marek Fil on how the events took place. According to him, it was in 2008 or 2009, it was definitely before the elections in 2010.

Fico Trnka: Stand up and get out

Trnka came to him, saying that he would be interested in meeting Fico. A few days or weeks later, Fico contacted Čižnár and told him that Trnka was attacking his aide, František Határ, and was demanding a meeting.

“I said: what do I have with it? It’s your business. It was repeated about two or three more times and it got on my nerves,” Čižnár described the events in court.

He finally advised his college classmate Fico to meet Trnk. He agreed, but wanted Čižnár to be present at the meeting. Apparently to witness what happens. The meeting finally took place at the government office a few days later in the evening.

Trnka immediately released a short excerpt from the USB recording on his laptop, on which Čižnár recognized Határ’s voice. The second voice, the voice of Chief Penta Jaroslav Haščák, did not know at the time. The recording was about how the sponsorship of Smer could be sent.

“That was all, it was a short sequence, then he closed the laptop and there was silence,” Čižnár described. Fico asked what it was supposed to be and reacted briefly to the recording. 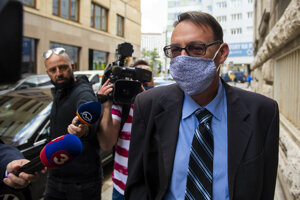 “The reaction was probably such that the Prime Minister told him: stand up and get out.” It sounded in harsher words, and Čižnár pointed out that he had made it more subtle. At the meeting, he then remained sitting alone with Fico.

“We sat there for maybe about ten minutes and talked about what it meant,” Čižnár added.

According to him, the whole meeting lasted about twenty minutes and he was disappointed that he had been waiting for such a useless meeting all day. To this day, he is said to regret having been persuaded to go to such a meeting.

In court, Čižnár defended Fica, claiming that he did not understand the content of the recording at all at the time and did not even act as a fundraiser for the black party. He wondered if the purpose was not to show Fico that someone was not walking behind his back and looking for sponsorship for the party without knowing it.

In returning his statement, Čižnár admitted that, unlike Fico, he did not have ideal relations with Trnk in the later period. However, the relationship with the Prime Minister was friendly; in addition to official events, they also went to various celebrations together.

Blackthorn: He must have been wrong

Trnka responded to his statement by reading a pre-prepared statement. He claims that Čižnár erred in time and that the meeting with Fico in the form in which Čižnár described it never took place. He has reportedly participated in every government meeting since 2006, so in 2008 he did not need to request meetings with Fico or Hatar, as he was in contact with them every week.

However, it was different in 2006. It was then that he received a short recording of Haščák’s interview with Hatar.

“The recording was unclear. (…) Therefore, I went to see Dr. Čižnár at his office at the Bratislava Regional Prosecutor’s Office, where I played the disc and asked him if it was František Határ’s voice, as he had known him for a long time and he was in contact with Fico and other representatives of the Smer party, “said Trnka.

Since Čižnár was not sure either, he asked him to meet with Harat, which took place properly during the day at the government office. Trnka does not remember whether Fico was also present there.

“I lost this recording, the only one I had at my disposal, to František Határ. He stated something in the sense that it could be his vote, that he realized some things of financial security within the election campaign. Nothing special about this recording, nothing criminal it did not follow, “said Trnka.

So he did not explain why he went to the government office with a recording on which nothing was criminal. According to him, the meeting took place in autumn or winter 2006.

He allegedly had a recording of the conversation between Határ and Haščák from the ex-boss SIS Ladislav Pittner, with whom he had above-standard relations.

Trnka also claims that Čižnár must have been wrong in describing the meeting, from which Fico allegedly fired him from the government office. Fico never fired him.

“I had no problems with Dr. Fico. On the contrary, Dr. Fico at that time, in 2008 or 2009, could justifiably be angry with Dr. Čižnár as his friend, as he prevented Dr. Fico’s sister from pursuing a career in the prosecutor’s office. Due to the situation I solved this problem, “added Trnka.

After Čižnár, another witness testified in court, namely an employee of the General Prosecutor’s Office Miloš Bystriansky, who is in charge of the IT section. He described how he had encrypted certain files on Trnkov’s instructions in the past.

“At the request of Mr. Trnka, I am at USB key recorded some CD. He approached me to encrypt the USB key, “Bystriansky said. He secured the files with the password given to him by Trnka, he no longer remembers it today. However, he is sorry that it was a long sentence related to Trnka’s dog.

Today it is known that when the police found the USB key in the house Mariana Kočnera, was the encrypted slogan “Edo loves bones”. It was Edo’s name was Trnka the Wolfhound, with whom he often went fishing in camouflage or even to the General Prosecutor’s Office.

Trnka praised Bystriansky for his experience with encryption. He mentioned this when describing his relationship with Pittner. In the past, he worked on the decryption of the so-called Mečiar cassettes in the case of BMG and Horizont, which even the SIS could not cope with.

However, he refused to let Bystrian encrypt the Gorilla. He allegedly used the password with his dog for various purposes and did not even consider it a cipher.

“As Attorney General, I had different information and I also had different files that I used in lectures or international conferences,” he said. According to him, he allowed materials of this kind to be encrypted for informatics. If he allegedly needed to encrypt the Gorilla, he would go to someone who does not work at the Prosecutor General’s Office.

He admitted that he himself would not go far in providing electronic materials.

“So far, I don’t have much experience with IT technology, I don’t like to use it and I can’t program anything at all,” Trnka said. That is why Bystriansky helped him with several things, even on private computers.

At Tuesday’s hearing, in addition to witness statements, several documentary evidence was provided, in particular concerning the collection of data from mobile Mariana Kočnera.

Previous articleTutorial – How to reset your PC in Windows 10? – Digital
Next articleUS Open, Barazzutti: “Berrettini can stop Djokovic”

The precautionary suspension of the license for the felling of the San Jacinto ficus – abcdesevilla.es

The decision of the judge to provisionally suspend the license for the felling of the San Jacinto ficus is...

School and energy costs, executives ask for a comparison

School and energy costs, about a month after the start of the lessons, the managers ask for a discussion...

7,000 coach drivers are missing for the start of the school year, here are the solutions found by companies – Ouest-France

7,000 coach drivers are missing for the start of the school year, here are the solutions found by companies...

The trial with Jankovská in the Fatima case begins, she cried when she arrived – Minute by minute, fast news from Denník N (mnt.sk)...

Before the start of the main hearing, Monika Jankovská felt nauseous and cried again. He's already in the...

Rafael Ramírez: There is no evidence of corruption against me 1:06 (CNN in Spanish) -- Luis Fernando Vuteff, an...

The precautionary suspension of the license for the felling of the San Jacinto ficus – abcdesevilla.es

The decision of the judge to provisionally suspend the...
World

7,000 coach drivers are missing for the start of the school year, here are the solutions found by companies – Ouest-France

7,000 coach drivers are missing for the start of...
World

The trial with Jankovská in the Fatima case begins, she cried when she arrived – Minute by minute, fast news from Denník N (mnt.sk)...

Before the start of the main hearing, Monika Jankovská...
World