Five things to know about Guinea, which has just experienced a coup – franceinfo

A coup d’état rocked Guinea on Sunday (September 5th), where special forces announced the capture of President Alpha Condé. Franceinfo invites you to learn more about this West African country marked by years of political violence.

Guinea is very often called Guinea-Conakry, from the name of its capital, to distinguish it from its Portuguese-speaking neighbor Guinea-Bissau and from Equatorial Guinea, where Spanish is spoken. Located in West Africa, this French-speaking country has more than 13 million inhabitants.

Guinea has immense natural resources with significant reserves of bauxite, gold, diamonds, iron, manganese… Mines largely under-exploited and which do not benefit the population. More than one in two Guineans live below the poverty line, on less than one euro a day, according to the UN. Guinea was severely affected by the Ebola epidemic that struck it between 2014 and 2016. 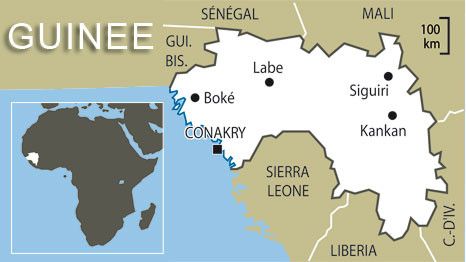 Guinea is the first country in sub-Saharan Africa to become independent from France in 1958. Since then, the history of the young Republic has been marked by autocratic powers, demonstrations and brutal repressions that have gone unpunished. The most striking recent example is undoubtedly the massacre at the Conakry stadium. On September 28, 2009, more than 150 people were killed and women raped during a peaceful rally against the presidential candidacy of junta leader Moussa Dadis Camara, now in exile.

Alpha Condé, 82, has been at the head of Guinea since 2010. The former historic opponent, who has known exile and prison, is the first democratically elected president after years of military dictatorship. “The Professor” promises modernization and reconstruction. But in 2019, after two terms and a relatively positive assessment, Alpha Condé forgets the principle of democratic alternation. The outgoing president decides to modify the Constitution to remain in power. This very widespread practice in Africa, known as the “third term syndrome”, provokes strong tensions, large demonstrations and a violently repressed protest. Dozens of civilians are killed, hundreds more injured and imprisoned.

With a tailor-made Constitution, the presidential election of October 2020 immediately takes a bad turn. Alpha Condé is declared the big winner of the ballot, despite the protests of his main rival and opponent of always, Cellou Dalein Diallo, 68 years. This former Prime Minister and head of the Union of Democratic Forces of Guinea (UFDG) is not the only one to denounce cheating. Several opponents speak of “masquerade”, even of “electoral hold-up”, a formula very often used in Africa.

Guinea-Conakry is more divided than ever and all hopes for a political alternation are swept away. By clinging to a third term, the former opponent Alpha Condé seems to have forgotten the democratic values ​​he has long defended.

Guinea is over 80% Muslim country and the Constitution guarantees freedom of worship. The population is made up of many ethnic groups, including the Peuls and Malinkés. These two groups represent well over half of Guineans. The community factor is undoubtedly important, but it is not politically decisive, even if the last presidential campaign was marked by hate speech and ethnic divisions.

While some communities identify with one party rather than another, the majority of Guineans are more worried about their daily lives, more threatened by poverty than by community divisions.

This is why the FBI raided Trump's residence 0:50 (CNN) -- We're back in uncharted territory. The FBI...

Monkey pox: vaccination skates “for lack of arms, not for lack of doses”

War in Ukraine, live: one dead in an explosion in Crimea; eastern Ukraine evacuates under Russian bombardment

Moderator of the show Zmenáreň after 15 years: THIS is how Eva Pribylincová (43) looks today! – Topky.sk

It was 2007, when the public broadcaster RTVS presented the show Zmenáreň for the first time on its screens....

The full Moon will tarnish this year the vision of the Perseids, whose peak will be reached next Friday and Saturday… – Salamanca24horas.com

One of the most vivid meteor showers visible in the night sky with 50-100 shooting stars an hour, the...

Beluga in the Seine: After six hours of effort, the animal was pulled out of the water – 20 Minutes

This is why the FBI raided Trump's residence 0:50...
World

Monkey pox: vaccination skates “for lack of arms, not for lack of doses”

War in Ukraine, live: one dead in an explosion in Crimea; eastern Ukraine evacuates under Russian bombardment

More than 3,000 civilians evacuated from...
World

Moderator of the show Zmenáreň after 15 years: THIS is how Eva Pribylincová (43) looks today! – Topky.sk

It was 2007, when the public broadcaster RTVS presented...