VIDEO Tarkovič before an important qualifying match against Cyprus: We have two problems – Športky.sk

SENEC – The Slovak national football team will have to do without Matúš Ber and Jakub Holúbek in Tuesday’s qualifying match of the World Cup 2022 against Cyprus at the Bratislava NFŠ. At Monday’s pre-match press conference in Senec, coach Štefan Tarkovič provided the latest information from the home camp, declaring a clear intention to conquer Cyprus.

The team would at least slightly correct the appetite for points losses in the previous September duels in Slovenia (1: 1) and at home with Croatia (0: 1).

“We have two problems, Jakub Holúbek and Matúš Bero will not be available. Holúbek has a chronic problem with an injury, Matúš has a virus and will not be ready for the match. As for the other players, we will see after training. the team had negative results, ” Tarkovich said.

In March in Nicosia, the Slovaks could not beat the opponent and drew 0: 0. So before Tuesday, there must be a different performance than in the spring. “We need to play differently. Our effort is to build on the performances against Slovenia and Croatia. These were good both in defense and in the offensive phase. We want to stabilize this performance. Cyprus is not a team that kicks the ball where its players are turned. They want you also have a chance to create, “ stated the coach of the Slovak Republic, who also faced the issue of a lower quality lawn at the Bratislava stadium: “The terrain will be the same for both of them. No one will change that and we have to deal with it.” 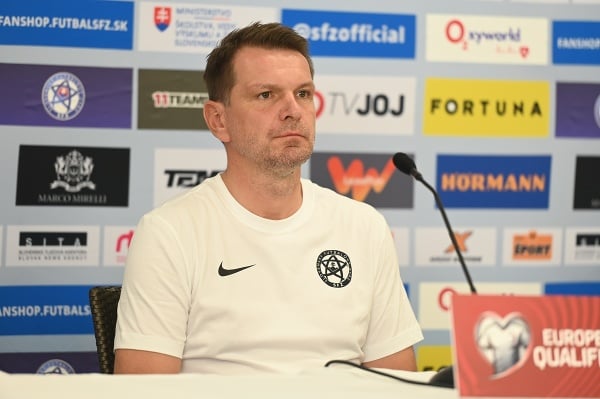 Guests should stay true to their style of playing on three trackers and defend especially well in a condensed block. The recipe for overcoming it is obvious. “It’s about activity, our players have to push to the end in the final phase. We have to get to the things we’re strong in. And we have to do it well. We want to win because we need it. We want to be constantly in the game of progress. We want to do our utmost to feed the dream of participating in the World Cup. From our point of view, Cyprus should be manageable. “ described Tarkovich’s plans.

Stanislav Lobotka, a midfielder, stood in front of the media behind the player’s booth. He gave good performances in the past two duels, he helped the team significantly, but in the end it was not enough for the points. “As a result, we didn’t make it, but we have something to build on. We are more dangerous, we can create a chance in combination. I believe that we will be able to do it tomorrow and that we can succeed.” said SSC Napoli, who had not played in Cyprus for the last time, but watched the duel closely: “Cyprus is moving forward, its players have been a great defender in the middle of the field. They are also waiting for their opportunity and we will have to be active, also wait for our opportunities and use them, we wanted to get as many points from these three matches as possible. to. “

Lobotka also commented on the margo of the terrain on Tehelná pole, which could cause problems for the combination team. But he did not look for excuses in advance: “The pitch will be the same for both of them. I don’t think they’ll be on the sixteenth and dig up. It will be about us if we can create a chance and if we will transform them.”