He commented on the indictment, but refused to testify.

We are constantly updating the article

BRATISLAVA. After the former special prosecutor Dušan Kováčik, the former Attorney General also appeared in court Dobroslav Trnka. On Monday, the trial began with the head of the prosecutor’s office in the case of the Gorilla recording, which he hid with him for seven years.

As a result, Trnka is accused of abusing the authority of a public official, for which he faces two to ten years in prison. If the court were to find that it had caused significant damage, the penalty could be even higher.

This is the first time that a former Attorney General has been prosecuted in court.

Related article Trnka remains the prosecutor. They will translate it Read

Trnka came to court with his lawyer just before the start of the hearing at nine o’clock. He brought a large briefcase full of files to help him. However, he did not respond to questions from journalists.

The case is heard by the Bratislava I District Court, where it is in charge of Judge Marek Filo. It is this judge who is also dealing with the case of skewers he sent from prison Marian Kočner.

The case of the Gorilla is also related to the entrepreneur, because according to the published recording of Kočner’s interview with Trnka from the summer of 2014, both of them tried to trade in the recording of the Gorilla. However, Kočner was angry when Trnka tried to blackmail Ex-Penta Jaroslav Haščák behind his back.

He refused to testify

Right at the beginning, Judge Filo asked if the defendant was not interested in concluding an agreement on guilt and punishment. Trnka’s lawyer refused.

“I am innocent,” Trnka added briefly. 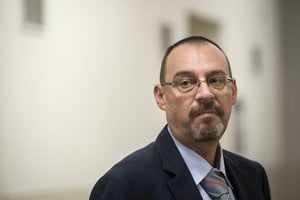 Related article Trnka on the recording with Kočner: I know they will kill me Read

Trnka made a statement to her for a few minutes, in which he declared that he was innocent. However, he refused to testify, ie to answer the questions of the prosecutor or the judge.

In his introductory speech, he claimed that he saw several mistakes in the case and that the Gorilla was found at Kočner, not at him, and he never even had it available. When the case reached the public in 2011, as the Attorney General acted.

“At that time, I just used my authority and personally ordered the establishment of a special team, or determined the jurisdiction of the special prosecutor’s office, which dealt with it. thus also the then director of the criminal department, a doctor You’re feeling, “Trnka declared in court.

He added that he was ready to prove the investigator’s mistakes and the discrepancy of the alleged acts with the real time situation, but he has not mentioned anything specific yet.

At the hearing, they subsequently read the statement of Oskar Bereczek, who is Trnkov’s longtime friend and companion on fishing. On a recording of an interview with Kočner, Trnka told the businessman that it was Bereczek’s idea to make more copies of the Gorilla together and try to negotiate with Haščák.

“I don’t know why Kočner and Trnka commented on me in this way,” Bereczk said in the preparatory proceedings and refused that he would be involved in the matter or even know that Trnka has a Gorilla.

Bereczek’s son Tibor also commented on the case in the preparatory proceedings. He admitted that in the past his father had asked him to be sure USB key in custody by a notary in Hungary. He himself probably doesn’t know that it would be a USB key from Trnka or that there would be a Gorilla on it. He also copied files for his father on the key.

“I considered it a technical matter. He asked me if I would copy something for him, he was not very computer savvy,” Tibor Bereczk told investigators. However, he did not even remember the name of the notary he searched for in Budapest, and he did not even know the contents of the key.

Trnka is still a prosecutor with suspended functions. After the disciplinary commission punished him in May this year by transferring him from the general to the lower prosecutor’s office, he is currently formally included among the prosecutors of the Žilina regional prosecutor’s office.

In addition to the Gorilla case, Trnka is also being prosecuted in the case of the transfer of the Glance House apartment building in Bernolákov. They resumed the investigation into the old case at the behest of the current Attorney General Maroš Žilinka.

Previous articleBanks take full advantage of tax havens to reduce their taxes – archyworldys
Next articleCovid-19: the health pass will only concern 64 shopping centers from Wednesday against 178 juice – franceinfo

It was in the early 2000s that Loana became known to the general public. By winning the first...

Parts of Seoul, the western port city of Incheon and other areas of Gyeonggi Province received more than 100...

The suspect is still actively sought by the police. A man suspected of being the author of two...

Tragic collision between a motorcyclist and a car in Bratislava: The man succumbed to his injuries – Topky.sk

"For reasons that have not yet been determined, a Škoda Fabia car and a Suzuki motorcycle collided. As a...

Greece – Spain in preparation for the Eurobasket, live and online – Sport

Parts of Seoul, the western port city of Incheon...
World

The suspect is still actively sought by the police....