Politicians should exercise restraint and avoid evaluating court or prosecutor’s office (GP) decisions. In the discussion program of Markíza television, the chairman of the National Council of the Slovak Republic and the chairman of the Sme rodina movement, Boris Kollár, and the parliamentary deputy, chairman of the Hlas-SD party, Peter Pellegrini, agreed on this.


Peter Pellegrini (Voice) and Boris Kollár (We Are Family) in a collage of images.

They responded to the emotional statements of some coalition party leaders after the lifting of the accusations of several people, including SIS executive Vladimír Pčolinský of corruption.

Both refuse to challenge a decision taken by the Attorney General in his or her legal capacity. “This decision is justified on more than 70 pages describing dozens of mistakes,” Kollár warned, emphatically refusing to intervene with the Attorney General for the dismissal of the former SIS chief – the nominee We Are a Family. He pointed out that the relevant section 363 of the Criminal Procedure Code had been used by the GP in the past, and at the same time recalled that there was information on the manipulation of witness statements. “If some have privatized justice during the direction of the Direction, it is not possible for the same thing to happen under this government, albeit in the name of the noble goal of fighting corruption,” the Speaker of Parliament emphasized. 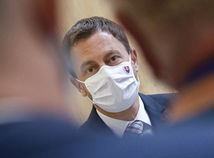 The head of the Voice-SD party demands that the GP be respected as an independent body with its powers. “If he has the legal authority to make a decision, we have to respect it whether we like it or not,” Pellegrini said. He thinks that the GP’s move may positively motivate other prosecutors, judges and police officers not to be afraid to decide in favor of justice, “although it will not smell like the media and like ‘verchuška’ led by Matovič and Remišová.”

He also pointed out that by its decision the GP did not prohibit re-bringing charges, but ordered it to do so legally.

In the case of discussions about a possible amendment to section 363 of the Criminal Procedure Code, Kollár emphasized that We are a family will not agree to its repeal, they agree with the discussion about the amendment. “If our coalition partners want to enforce a version with which we do not agree, it is a violation of the coalition agreement,” said Kollár. He confirmed that in the event of the repeal of the section We are a family, he will leave the government.

Pellegrini pointed out that the power of the Attorney General in the case of section 363 is a tool to prevent unjust accusations, and anyone can become a victim of such abuse.

The situation in the police

Both discussants also commented on the situation in the police and the resignation of the current police president Petr Kovařík. The ex-prime minister is convinced that the accusation of the chief of police for obstructing justice was not Kovařík’s autonomous decision, but that he interrupted police intervention in the case of manipulated witness statements at the behest of the Minister of the Interior Roman Mikulec. “It cannot end with Mr Kovařík leaving, Minister Mikulec must also leave, and I think Mr Lipšic should also pack his suitcases,” Pellegrini said, suggesting that a special prosecutor may have been involved in the case.

The head of parliament stressed that the re-proposal of the party Smer-SD to dismiss Mikulca MPs We are a family in plenary will not support. “However, we will not obstruct the extraordinary meeting,” Kollár announced.

Minister of Justice Mária Kolíková (For People) together with other members of the For People party will probably leave for the SaS party. If this happens, changes in the coalition are not excluded, Kollár said in a discussion session.

“I think that Mária Kolíková and the offenders from the For the People side will join the SaS party, and then we will lose the coalition partner,” Kollár said. He stressed that the coalition cannot have one of the partners with two to four votes. According to him, it is possible that then there would be changes in the coalition, including the redistribution of posts.

"They turn off" at least a dozen media outlets in Nicaragua 4:01 (CNN Spanish) -- Aníbal Toruño, director and...

Even people with Covid-19 can travel by bus! Topky.sk must comply with several measures

Although starting the season with a victory doesn't mean much, three...

"They turn off" at least a dozen media outlets...
World

Even people with Covid-19 can travel by bus! ...
World