Why is the vaccination against Covid-19 a double-edged sword? – International Network

The principle of vaccination is to introduce into the individual a harmless substance similar to the pathogen, against which one wishes to protect oneself. In the case of COVID-19, the substance used is not directly injected, but produced by a genetic code injected in its place. What about the evolution of the number of cases of infections in countries which have implemented generalized vaccination programs?

The principle of vaccination is to introduce into the individual a harmless substance (called an antigen) similar to the pathogen, against which one wishes to protect oneself. The body will identify this substance not produced by the body, and recognize it as an anomaly. A complex process spanning several weeks then takes place, allowing the body to produce an effective and specific immune system capable of destroying the targeted substance. This substance being similar to the real pathogen, if by chance the latter later tried to infect the already vaccinated individual, this pathogen would be quickly destroyed by the immune response due to the vaccination, and the person would not fall ill. This general principle is applicable to many diseases (diphtheria, tetanus, poliomyelitis, whooping cough, measles, rubella … see: vaccination-info-service.fr/Les-maladies-et-leurs-vaccins) and allows them to be effectively controlled through vaccination.

In the case of COVID-19, a disease triggered by the viral pathogen SARS-CoV-2, the principle of vaccination is slightly different. The (theoretically) harmless substance used (the antigen) to immunize the vaccinated population is in this case not directly injected, but produced by an ad hoc genetic code injected in its place. This precursor genetic code will produce this antigen (here, the Spike protein) directly in the cells of the person who received the injection. This allows for faster development of vaccines, and offers greater flexibility if antigen modification is required.

The vaccines thus produced, in view of the encouraging results presented by pharmaceutical laboratories (relative protection on the original virus greater than 90%) have received so-called conditional authorizations for use, following the lack of hindsight required for unrestricted authorization. This conditional Marketing Authorization obliges the laboratories to provide additional information, after placing on the market, within the deadlines set in the authorization to the competent authorities.

Many rich countries have therefore quickly set up generalized vaccination programs to protect their populations.

However, several surprising observations regarding the evolution of the number of cases of infections have recently been reported following these vaccination campaigns in several countries (Figure 1A). Take the example of Israel, where more than 60% of the general population has been vaccinated for months (Figure 1B). With less than 2 cases per million inhabitants in mid-June 2021, they are today (mid-August 2021) at more than 750 cases per million inhabitants, an increase of 37,400% in 2 months !! A similar observation exists in the UK, with a less massive increase in cases between mid-May and mid-July, but nonetheless still impressive at 3,077%. Note that the proportion of the population fully vaccinated in the United Kingdom was 32% on May 20 and 54% on July 20, lower than Israel.

However, such increases are not generalizable to all countries. Thus, for example, France and the United States saw their number of cases per million inhabitants increase only from 28 and 36 on June 27 to 360 and 417 on August 18, respectively. That is an increase for these two countries of “only” ~ 1200%.

Why such differences between countries which are nevertheless well vaccinated?

One might think that the United Kingdom and Israel have vaccinated their populations less than France and the United States, which would explain why they are much more affected by an upsurge in the number of cases. However, the reality is precisely the opposite, as illustrated in Figure 1B. Israel vaccinated the most, followed by the United Kingdom, then a little behind, France and the USA. The cause of these differences is therefore elsewhere.

Figure 2 shows us that France and the USA were affected later than the United Kingdom and Israel by the epidemic caused by the SARS-CoV-2 variant Delta. It is important to note that it has been shown in the scientific literature that the vaccines used on the planet are significantly less effective against this Delta variant.,

The increases in observed cases therefore correlate with the precocity of the increase in the proportion of the Delta variant. (which itself is less susceptible to vaccination, see below), as shown in Figure 2: 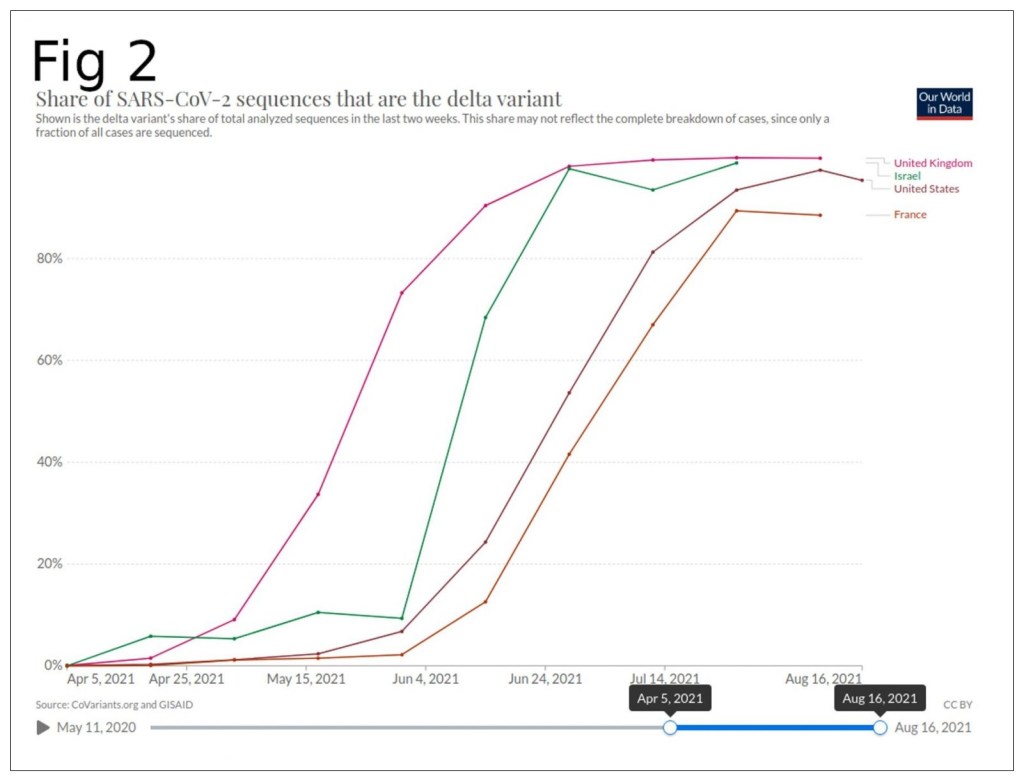 How to explain these increases in delta cases?

An article published in the highly respected journal Cell in June 2021 sheds light on the molecular mechanisms explaining these upsurges in infections with the Delta variant. This would be a phenomenon known for nearly 60 years, today called ADE, for “Antibody Dependent Enhancement” (of infectivity), or in French: “Augmentation (de l’Infection) Dépendante des Anticorps”.

The operating principle of ADE is particularly astonishing, and illustrates how much certainties in biology are frequently relative … As presented above, the immune organism is capable, in particular thanks to the specific antibodies that it produces after a vaccination or a natural infection, to block the deleterious effect of the pathogen considered, here SARS-CoV-2. However, it has been shown that when these antibodies are too few in number or do not recognize the targeted antigen sufficiently precisely, from so-called “neutralizing” antibodies, they become “facilitating” antibodies. This is due to a mechanism that stabilizes the virus on its target cell, allowing it to infect the latter more effectively. In summary, people get sick more frequently. This has been reported for different classes of viruses, both in humans and in animals. Thus the antibody facilitates presentation and infection of the cell by the virus instead of preventing it.

In the case that interests us here, the authors of the article in Cell synthesized their results on a very explicit figure, reproduced below: 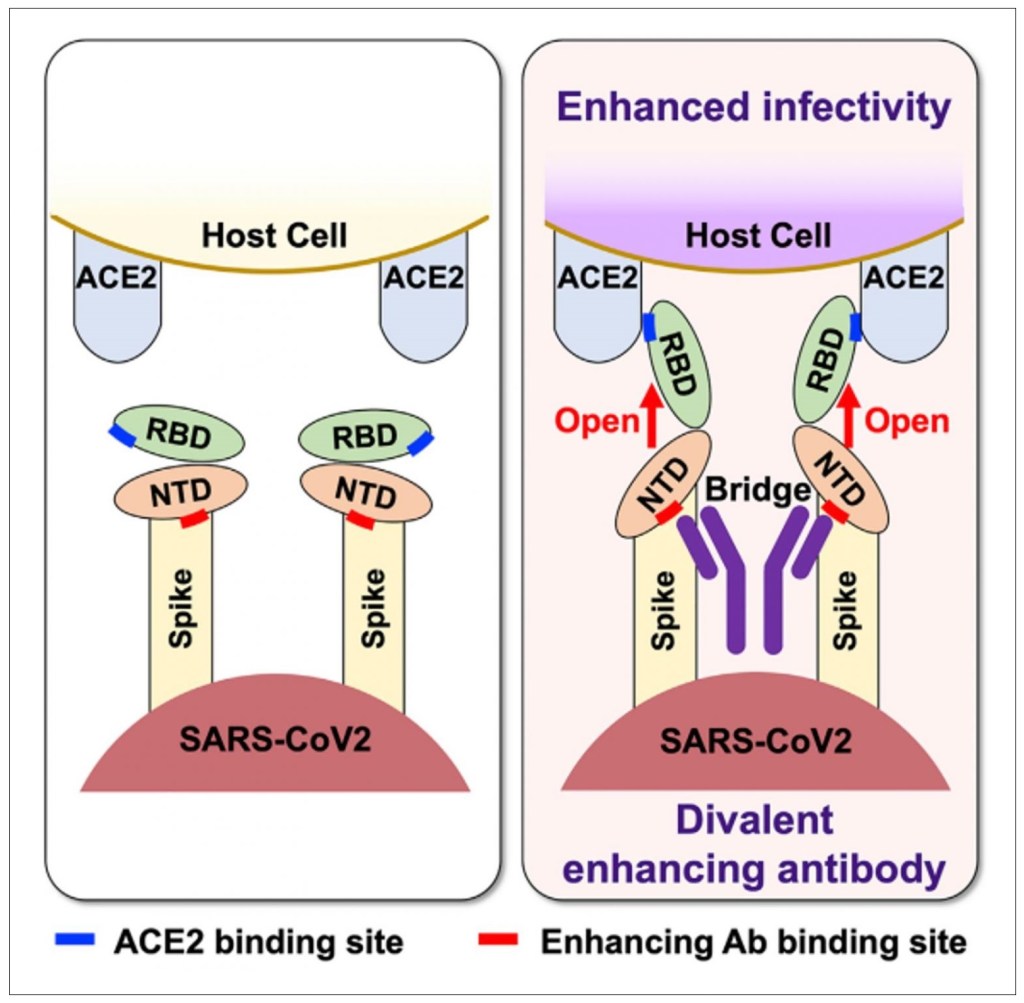 Two viral Spike proteins are shown with the “RBD” (Receptor Binding Domain) domains at their ends, which must recognize the ACE2 receptors present on the cell in order to allow the virus to enter the cell. This recognition is done during the extension of the RBD domains, symbolized on the right (“Open”). The authors demonstrated that facilitating antibodies maintain this structure in an open position, and thus facilitate viral infection.

This phenomenon occurs, as explained above, when our specific Spike antibodies are not effective enough to neutralize the virus, either because there are not enough of them, or because they do not have a high enough affinity. for the virus. Here, the authors show that these antibodies are directed to very specific domains present on the so-called “N Terminal” part of Spike (NTD). The Delta variant notably escaping current vaccines[1],[2], this phenomenon is likely to occur frequently, and could be the cause of the increases in observed cases. In addition, mass vaccination during an epidemic is an additional factor in the onset of ADE.

Thus, at the end of July 2021, the Jerusalem Post reported thatin Israel, over majority of COVID-19 hospitalizations are due to fully vaccinated people !

All of these factors explain why a growing number of scientists today no longer hesitate to openly recognize that vaccination will not achieve any collective immunity. In particular, with regard to vaccines who become the most sensitive to the Delta variant, as shown by the example of Israel.

The good side of this situation is that it puts de facto back on the front of the stage the need to set up an early treatment strategy either with repositioned existing drugs (Ivermectin, Hydroxychloroquine, others? …), or with new ones. drugs still to be developed.

Finally, to end on a positive note, all the curves available on deaths following infection with the Delta variant indicate that the lethality of the latter is considerably lower than that of the previous variants. This suggests that a SARS-CoV-2 / human adaptation may be underway, and could ultimately allow this disease to be considered a relatively mild viral respiratory infection.

Previous articleUkraine / France – The notes of the Blues in the press: Kimpembe disappointed – Parisfans.fr
Next articleSTRICT: A serious traffic accident. The bus collided with several vehicles – SME.sk

Houssem Aouar, who has long dreamed of the Premier League, has agreed with Nottingham Forest on the terms...

"The brain of the Ukrainian president is affected by drugs," Russian ex-president Dmitry Medvedev said on the Telegram social...

Nairo Quintana, disqualified from the Tour de France for taking the painkiller tramadol

Much to his regret, Nairo Quintana, who has just renewed for three years with the French team Arkea, is...

Storms, rains and hailstorms: thirteen departments in orange vigilance, a “risk of violent phenomena” according to Météo-France – France 24

Houssem Aouar, who has long dreamed of the...
World

"The brain of the Ukrainian president is affected by...
World

Nairo Quintana, disqualified from the Tour de France for taking the painkiller tramadol

Much to his regret, Nairo Quintana, who has just...