Matovič again criticized Lengvarský, he did not rule out his replacement – SME.sk

According to him, there is also a change in the election of the police president in the game.

BRATISLAVA. The General Prosecutor’s Office has used the disputed section 363 of the Criminal Procedure Code, which gives it the opportunity to annul the accusation or criminal prosecution, several times. At present, this is a purposeful effort to change the provision.

This was pointed out by the vice-chairman of the Smer party Ladislav Kamenický in a discussion session RTVS O 5 minut 12.

“I am not against the fact that if someone does something wrong, let them face criminal proceedings. But I am against the narrowing of this paragraph and the powers of the General Prosecutor’s Office, because this can later affect ordinary people,” Kamenický explained.

The President OĽANO Igor Matovic he stated in the program that he was trying to understand the decisions of the General Prosecutor’s Office, but considered it difficult.

Related article This is not the case, experts from practice evaluate the release of Pčolinský Read

“The Prosecutor General’s Office has given a negative order when it said that people should not be prosecuted as an entrepreneur Jaroslav Haščák. We agreed in the coalition that there must be a professional and honest debate on this topic and that the government’s program statement must be fulfilled when the government decided to oppose the negative instructions, “Matovič responded.

He also added that a change in the election of the police president is also at stake. He said this on the sidelines of the departure of the currently accused police chief Peter Kovařík.

“The debate on this topic is open, but so far I do not see it as a hot topic. The choice of successor will probably be carried out according to the current legal procedure,” Matovič added.

Kamenický considers the lottery a waste

The finance minister also objected to the claim that the launch of the vaccination lottery could be as low as 41 percent vaccination population.

According to him, the Ministry of Health is responsible for the vaccination rate. He therefore did not rule out the replacement of the Minister of Health Vladimír Lengvarski (nominant OĽANO). 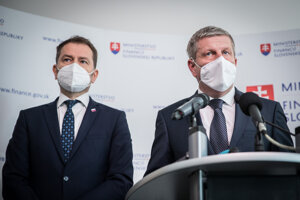 Related article Vaccination lotteries in the USA ended in fiasco. Matovic is strict only to Lengvarsky Read

“In five months, I have not registered any innovative activity to increase the vaccination of people over the age of 80. We will see how the situation will develop in the coming weeks,” Matovič said.

Kamenický continues to insist on the voluntary nature of vaccination and considers the vaccination lottery a waste of money.

Previous articleCovid today Puglia, 156 infections and no deaths: 5 September bulletin
Next articleThe EELV poll shows “an abysmal notoriety gap between Yannick Jadot and the other four contenders”, a – franceinfo

The gas pipeline operator today described the damage as "unprecedented" The price of natural gas fluctuated in this session...

A lion at the presentation of Kostas Manolas. What can ever go wrong? The 31-year-old Greek defender...

"I appreciate your investigative work because if not, I...
World