Heger does not want to replace Matovič, he did not express confidence in Žilinka – SME.sk

According to the Prime Minister, the visit of the Pope is a blessing.

BRATISLAVA. Prime Minister Eduard Heger he did not want to say in the TA3 TV talk show whether he has a prosecutor general Maroš Žilinka his trust. He said he did not need to make “strong statements” but to provide expert solutions.

The Prime Minister expects that on Monday the leaders of the coalition will talk at the Coalition Council about the first conclusions of the expert commission to narrow section 363 of the Criminal Procedure Code, on the basis of which the Prosecutor General’s Office acquitted the former Director of the Secret Service Vladimír Pčolinský.

“I understand the people who are currently experiencing that justice has suffered a severe defeat,” Heger said, adding that his job was to calm the situation.

The media selection surprised him

Last week, the coalition agreed to set up a working group to review and amend section 363 of the Criminal Procedure Code.

On the basis of this section, the Prosecutor General’s Office on 31 August dropped the charges against the businessman Jaroslav Haščák, former head of counterintelligence of the Slovak Information Service Ľubomír Arpáš and his wife Dane Arpášová and also two charges against the director of the secret service, Pčolinský. In the coalition, in addition to the We Are the Family movement, this step of the prosecutor’s office provoked criticism.

The decision of the prosecutor’s office was explained at a press conference this week by Prosecutor General Žilinka. However, Denník N, Sme and the Aktuality portal did not release the press.

The prime minister said he was surprised. “All accredited journalists are welcome at the government office,” Heger said.

He described the arrival of the pope as a great thing

Public events within visits of the Pope František will also be available for visitors in the OTP mode (vaccinated, tested, obsolete COVID-19). Heger said in this connection that it is in the hands of the public health office and the organizer. 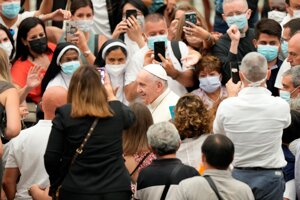 Originally, only vaccinated people were to go to Mass with the Pope. The Prime Minister claims that this decision “in no case” was not to support the growth of vaccination, but for reasons of health protection. He described the arrival of the pope as a great thing. “It is a great blessing,” the prime minister added.

Heger refused to want to replace the leader of the Ordinary People and Independents (OľaNO) movement Igor Matovič.

In connection with the opposition’s proposal to dismiss the Minister of the Interior Romana Mikulca (OĽANO) Heger said that the minister had his trust.

He assumes that Mikuláš’s dismissal will be discussed at the regular September session of parliament, but according to him it is the “floor” of the parliamentary club. OĽaNO.

Among the last, but smoothly. The MPs agreed to the entry of Finland and Sweden into NATO – Denník N

Members of the Slovak Parliament voted to express the approval of the National Council to the Protocol to the...

The category three phenomenon, with winds of up to 200 kilometers per hour, has made landfall in Cuba and...

The Genoa Boat Show was hosted inside the largest urban renewal...

Protect your brain, entrust yourself to the neurologist ‘, the serial series begins

'Protect your brain, entrust yourself to the neurologist' is the project born from the collaboration between the Italian Society...

Among the last, but smoothly. The MPs agreed to the entry of Finland and Sweden into NATO – Denník N

Members of the Slovak Parliament voted to express the...
World

The category three phenomenon, with winds of up to...
World

DeSantis warns of possible catastrophic flooding in Florida by...