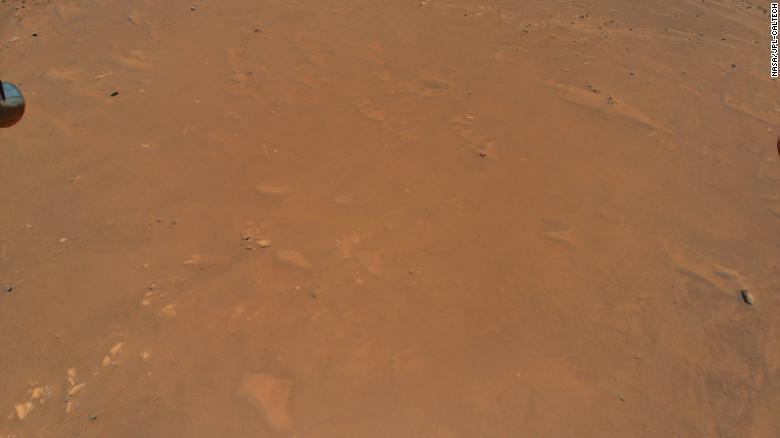 See the flight of the Ingenuity helicopter on Mars in 3D 0:50

(CNN) – Ingenuity’s next flight to another planet was never part of the plan. Once the Ingenuity helicopter completed its five flights to prove it could do so on Mars, its mission was supposed to be over.

No one told Ingenuity, which in turn was an add-on to the Perseverance rover’s mission to explore the possibility of ancient life on Mars.

The small helicopter that did it could fly a sixth time next week to explore a new destination on its air tour of Mars.

Higher than ever, Ingenuity flies on Mars 0:40

On the next flight, the 4-pound Ingenuity will become an aerial rover, identifying intriguing features on Mars and landing at a different airfield than its current home.

The Ingenuity cameras will collect stereoscopic images of sand waves and rocks. These images, in which photos of the same object are taken from different angles, produce a depth perspective and a 3D effect. In this way, the helicopter will demonstrate its exploration capabilities.

The helicopter team at NASA’s Jet Propulsion Laboratory in Pasadena, California, has yet to announce the date of the flight, in which the Ingenuity will fly at 4 meters per second and spend 140 seconds in the air.

During this part of the Martian mission, the helicopter will demonstrate capabilities that could be used by future aircrafts on other planets.

Perseverance, which is preparing for your own scientific mission In search of evidence of ancient life, it will not take any pictures or video of the helicopter’s next flight.

Ingenuity took this color image from a height of 10 meters during its fifth flight on May 7.

During Ingenuity’s technology demo in April, the rover was technically on hold, acting as a communications transmitter between the small helicopter and the teams on Earth.

Now, although the robots will continue to communicate with each other, they will take different paths, and Ingenuity will continue to operate in a way that does not interrupt Perseverance’s main agenda.

Ingenuity’s sixth flight will begin with the helicopter rising 10 meters above the ground and flying southwest for 150 meters. Once this distance is reached, Ingenuity will capture color images of what the helicopter crew considers to be an area of ​​interest as the helicopter flies south about 15-20 meters.

Once Ingenuity takes these images, it will fly 50 meters to the northeast and land at a new airfield, called Campo C.

This is also the first time that the helicopter will land in a location that it has not inspected on previous flights.

The flight plan is based on images taken by the Mars Reconnaissance Orbiter, which has been orbiting the red planet for 15 years. Those images suggest that the new airfield is flat and will pose no risk to Ingenuity’s landing.

The data collected by this veteran orbiter mission also helped NASA choose the site of Jezero crater, where the rover and helicopter first landed on February 18.

We will have to wait a little longer than usual for the images of Ingenuity’s sixth flight to return to Earth, due to the new agreement between Ingenuity and Perseverance. Instead of the day of the flight, they will be shipped on the following days.

But judging from Ingenuity’s aerial tour of Mars so far, it will be worth the wait.