After the cases, hospitals are filling up and deaths are rising. The delta has arrived in the Balkans and is different from the west – Denník N

Delta variants of coronavirus quickly conquered the whole of Europe in the summer, currently spreading mainly in the west and south of the continent.

But while in Western Europe this is particularly evident in the high numbers of new cases, in some countries in the Western Balkans, fuller hospitals and high casualties are already visible.

Ilir Alimehmeti is an Albanian epidemiologist from the Medical University of Tirana. He says the delta arrived in the Balkans a few weeks later because the region does not have as many contacts with India as Western Europe.

“In terms of the number of new cases, the trajectory is easy to predict because it is in line with the curves we have seen in other European countries,” he told Dennik N.

According to him, however, we should no longer pay attention to new cases, but to hospitalizations and deaths.

In contrast to the countries of Western Europe, cases in the Balkans are also reflected in a more significant increase in the number of people in hospitals and in the number of victims. Particularly in Northern Macedonia and Kosovo, but also in Bulgaria and Montenegro, there is currently a difference in deaths compared to the more vaccinated United States, Israel, Greece, Cyprus, Lithuania and Britain, where the virus epidemic is now severe.

Number of new confirmed deaths related to covid per million inhabitants. Source – Our World in Data 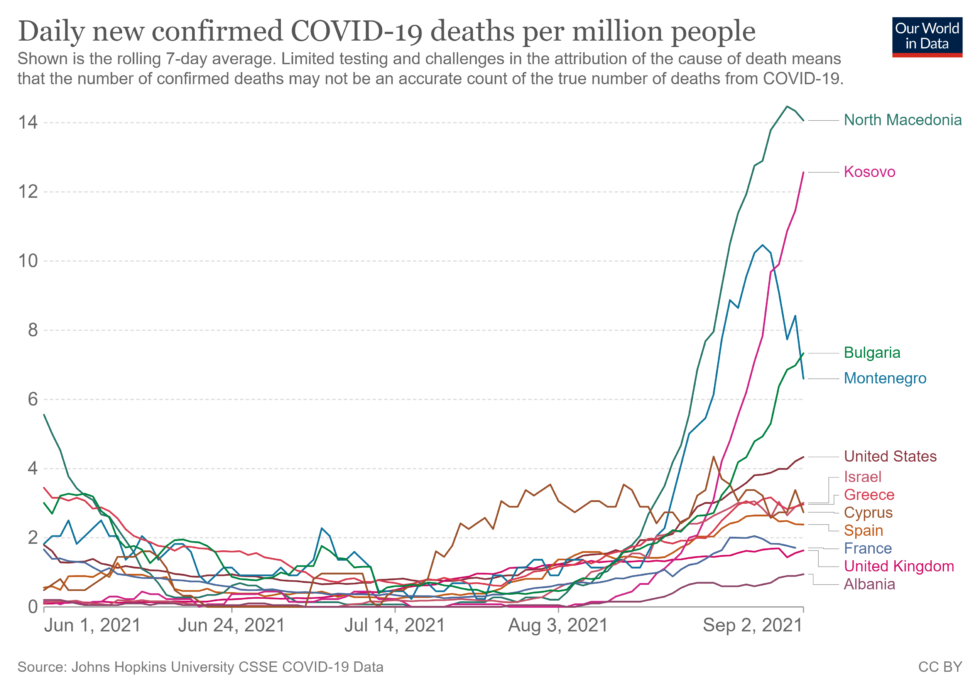 They report in Kosovo daily records in the number of victims and the number of deaths in Northern Macedonia reached the top from the autumn wave (but not the spring numbers).

In Bulgaria, 4 thousand people in hospitals

There is also a big difference in the number of people in hospitals. Many Balkan countries do not disclose these figures, but in Bulgaria, for example, 7 million people are hospitalized currently 4,000 people with covid, there are 333 people at JIS. The virus is also spreading in the country as a result of holidays, as the epidemic is strong in cities on the Black Sea coast, according to Bulgarian doctor Boris Tablov.

An average of 50 people die every day.

The reason for the higher deaths is mainly that the Balkan countries have significantly lower vaccinations against covid than the countries in Western Europe. In Bulgaria it is only 17 percent, in Montenegro less than 30 percent.

Full vaccination against covid, percentage of population. Source – Our World in Data 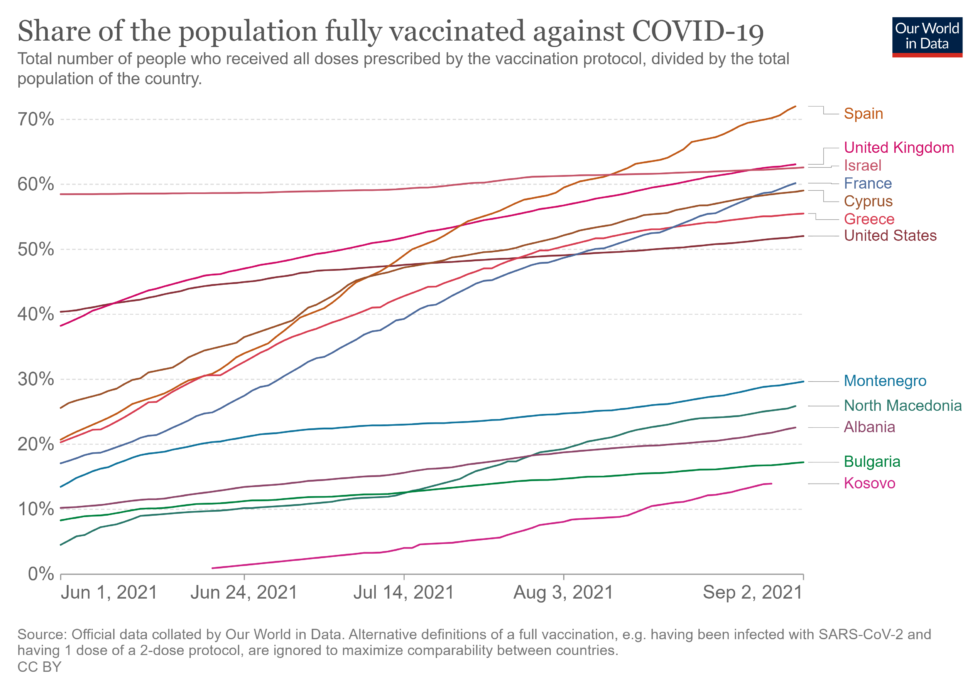 Epidemiologist Alimehmeti says that vaccination rates are “the main part of the puzzle”, but it is not the only factor.

“We must admit that the Western Balkans do not

This article is the exclusive content for subscribers of Diary N.

Are you a subscriber?
Previous articleTrnka goes to court. He was hiding the hiding of a Gorilla – PRAVDA.sk
Next articleIn Côte d’Ivoire, a wind of revolt against the culture of rape

AFP, published on Friday September 30, 2022 at 4:19 p.m. European energy ministers reached an agreement on Friday to...

Neymar, who seemed to have to remain neutral in...