Čekovský is looking forward: I basically gave myself a new design such that it rejuvenated me by about 20 years – PRAVDA.sk

The program of Slovak cinemas has been enriched by the new Czech comedy Večierok. This is the feature directorial debut of the famous actor Michal Suchánek (Snežienky a machri, Tele cal).

Suchánek adapted his own play about former classmates who gradually meet for a party. The meeting would probably have been held in the spirit of a nostalgic recollection of the old days if, instead of another classmate, a door-to-door salesman had not rang the doorbell with an unexpected message about a friend who would no longer attend the meeting because he had died. The participants of the party go to him together by bus and during the trip it turns out that talking about real feelings is much more complicated than it might seem at first glance.

Jiří Langmajer, Tatiana Dyková, Marek Taclík, Karel Roden and Nela Boudová played in the film. “An extremely strong party met here and we were working on something that was extremely interesting and new for all of us. So it could be interesting and new for the audience in cinemas as well, “thinks Langmajer, the representative of Jiří Hrd, in whose house the introductory party from the title of the film takes place. “Parties are always a fun thing. I love them and I think there will be more of us in the Czech Republic. In Slovakia too. We love ‘joking’ and ‘party’! So we have a common theme with the audience, “adds Tatiana Dyková, his film wife. Among Slovak faces, viewers can look forward to the musician Marián “Čeky” Čekovský. According to his own words, he will play the role of Piő Petőfi, a gay man who makes a living by singing songs at various pofidér parties, where his agent sells vacuum cleaners. 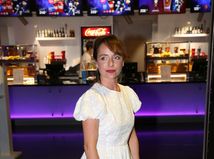 Read more Dyk didn’t look better for a long time! She enjoyed the party with her husband and Čekovský

“The character is really very diverse and I was looking forward to working with such personalities who play around me,” says Čekovský. He adds that his character also required an unprecedented physical change. “I shaved because of this film, and I basically gave myself a new design that rejuvenated me by about 20 years,” he said.

Previous articleCovid-19: in New Caledonia, vaccination will be compulsory for all adults, including tourists – archyde
Next articleNo Green Pass, demonstration flop in front of Rai in Milan

Cynical monster: The coalition crisis in a single picture of SME

Casemiro, between Real Madrid and Manchester United: last minute of the signing – AS

Casemiro, between Real Madrid and Manchester United: last minute signing AS The 'Casemiro case' is unthinkable at Barça Sport....

There are 1,048 new covid infections in Tuscany according to today's bulletin, 19 August. There are also 12...

Medallia, a global leader in customer and employee experience, has just signed an agreement to acquire Mindful, a leader...

Cynical monster: The coalition crisis in a single picture...
World

Casemiro, between Real Madrid and Manchester United: last minute of the signing – AS

🔄 Click here to see the most recent posts
World