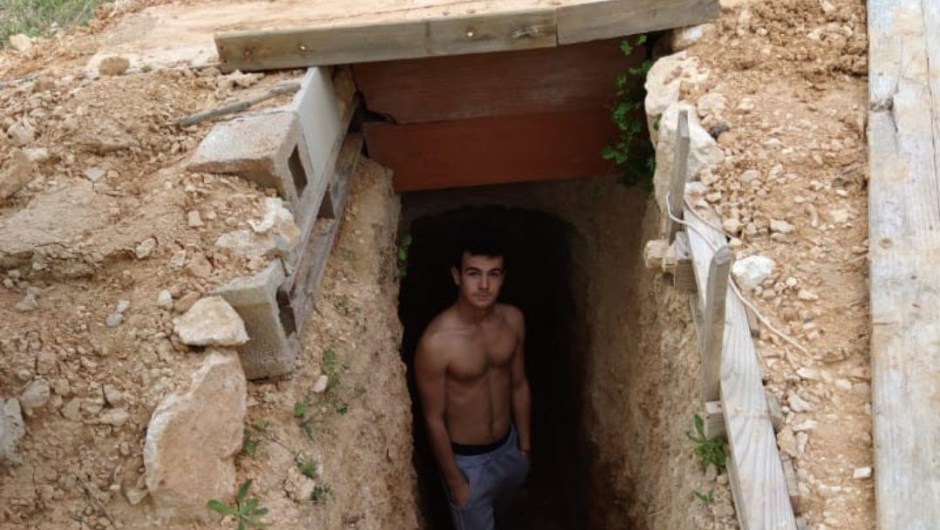 (CNN Spanish) – Perhaps every teenager has thought about it at least once after arguing with their parents: to open a hole and go where no one will bother him. And Andrés Cantó showed that this fantasy can come true.

When he was 14 years old, his mother told him that he should change his clothes if he wanted to go out, but, in what he describes as a “prepubescent tantrum,” he went “to the bottom of the terrace, I picked up the hoe and paid for the frustration against ground, “he told CNN en Español.

“I only know that in the end I had a little hole that I went to late after afternoon.”

Today, the 20-year-old from La Romana, a town of about 2,400 inhabitants in the province of Alicante, in southeastern Spain, is proud of his cave that has “a corridor of stairs, a small living room and a room with a bed on the left, some seats for friends and a huge rock that I have not yet removed.

THE CAVE, the thread of how a 14-year-old boy started a cave.

1. March 9, 2015; After a prepuber tantrum, I started to hit the terrace, I did not handle emotions very well xd pic.twitter.com/U1VyVwjoFu

How it all started

Fascinated by the tradition of some of his neighbors, as he says that “in the countryside where I live all the elderly people have caves”, he began to dig “with nothing but a chisel and a hammer.”

That was until 2018, when he met his best friend, Andreu Palomero.

Palomero went to visit him and asked about the 1.2 meter deep hole in the ground. “I told him I had an idea to build a cave but it’s crazy, I don’t see a future for it,” says Cantó.

«And the very crazy man tells me ‘well I do see a future for him and I have an electric motorcycle that I can leave you’. He came that same afternoon with the large electric pick with which we began to dig the 2 meters that we needed to get to the first room there today, “he adds.

Cantó affirms that in his neighborhood there are about “7 or 8 caves, of neighbors that I know.”

And that although at the beginning only one person could be inside digging, he began to take out gravel, clay, earth and stones with his friend, always molding “in the shape of a curve, because if you start making right angles it falls out.”

And what did his parents say that he was digging a hole in the middle of the family lot?

“Since I’ve been a kid who’s always been building cabins and weird things, they weren’t surprised. Every day they asked ‘how’s it going’, ‘are you still digging?’ ”, Says Andrés.

In 6 years of construction, Cantó has used a “homemade” pulley system, so as not to have to carry all the earth that is being removed, and has been including pillars to support the walls.

Currently, Andrés’ cave has, according to his own calculations, about 7 square meters, and can accommodate “about 7 people, at most.”

And it can be there regardless of the weather.

He says that in summer, when it can be 35 or 40 degrees Celsius outside, “down in the cave there are about cool 20.” In winter, however, as the temperature can drop to less than 15 degrees, he added a heating “with coals” and “a stove”, as well as a fan to draw the air out.

Rain hasn’t been a problem either, he says, thanks to the layer of soil that separates the cave from the surface. The only water problem arose when he built a pond outside to which he discovered a leak that ended up seeping into the cave.

The pond and the fountain on the terrace, very chill everything! pic.twitter.com/GhpzpIOan7

And as for the animals, Cantó says that he lives “with spiders, snails, some fireflies and a cat that does not care to go down to the cave.”

As if that were not enough, it also managed to bring Wi-Fi to its underground space. He puts his cell phone up, with unlimited data, and when it is down he connects and can, depending on the account, download movies and listen to music.

A project that went viral

At the end of April, Cantó posted a thread on Twitter to tell his 300 followers and his “three friends who ‘liked’ tweets” the story of how the cave came into being. I didn’t expect it to go viral.

After the digital uproar, Cantó received a visit from a Civil Guard patrol car and an agent from the Nature Protection Service (Seprona) to make a report.

But since “it cannot be classified as a basement, a garden shed, or a house, and it is within my family’s land,” the young man from Alicante still does not know what type of license he would have to obtain.

What’s next for the cave

His idea is to finish his room in the cave this year and have it to rest when he visits.

This, then, although he has always enjoyed building far from the surface – before the cave he had a tree house – now he has a new project: to be an actor.

Last year he finished his artistic baccalaureate and is now preparing the tests to study dramatic art in Valencia.

Sang laughs when he says “They have me here like the madman who every time he gets angry comes and digs a room.” But he also says he knows that, with all the hours he has been digging since he was 14 years old, the cave “has served as a psychologist.”

1 thought on “A teenager argued with his mother and began to dig to take out his frustration. 6 years later, he has a cave with heating and wifi”