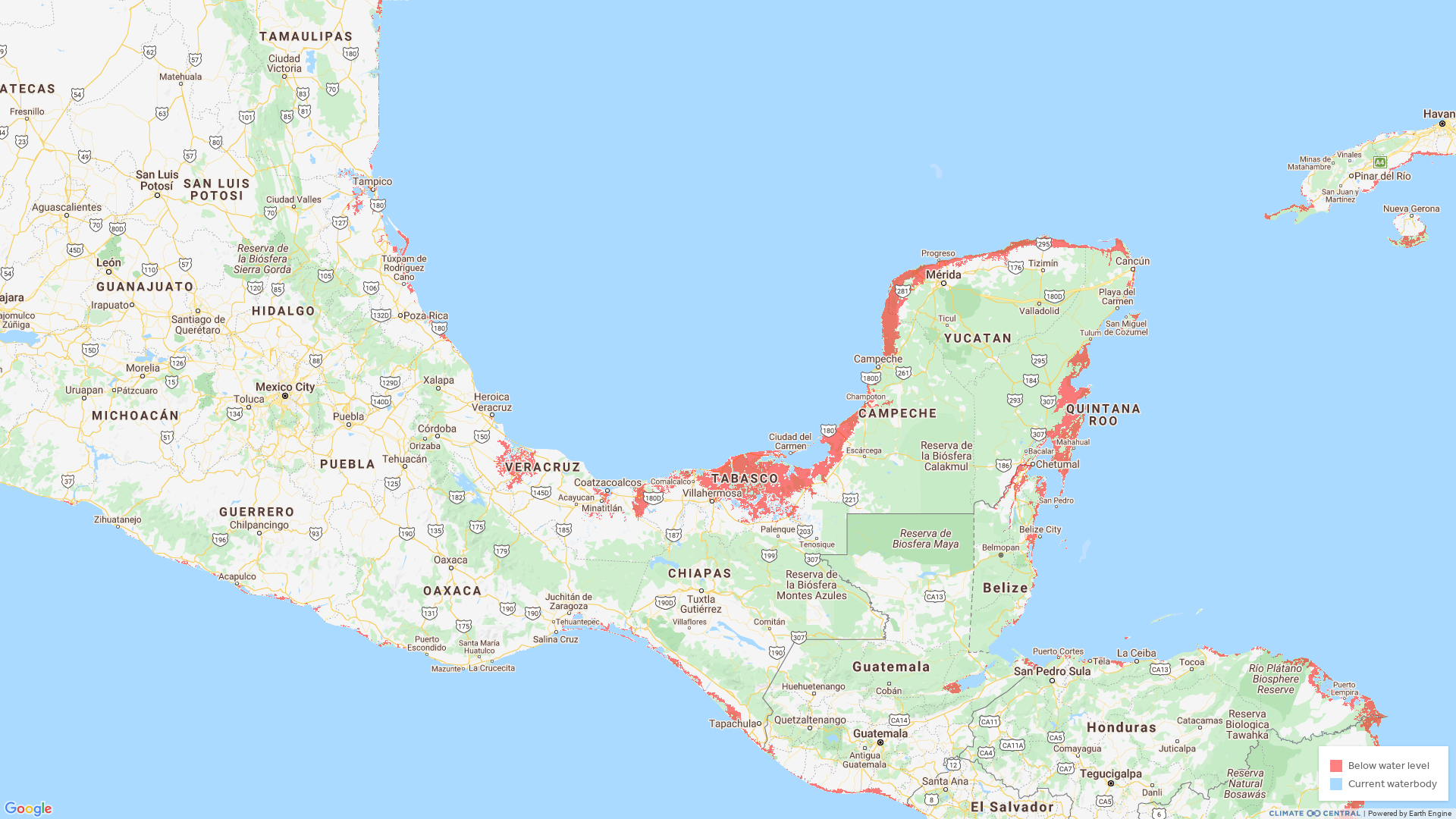 (CNN Spanish) – Millions of people around the world are threatened by rising sea levels which, along with other factors, could be carried over to entire cities throughout this century. From North America to Asia, the alarms are on. What is happening in Latin America? We show you here some of the areas that could be under water by the year 2100, according to a model published by the Climate Central organization.

Estimates of sea level rise have evolved over the years. What happens will depend, among other factors, on the increase in temperatures on Earth (which in turn is linked to greenhouse gas emissions).

In this context, a study by Climate Central published in 2019 in the journal Nature Communications he calculated that this increase will be between 0.6 and 2.1 meters over the course of this century, a figure much higher than previous estimates.

That implies that, by the year 2100, the land on which they live 200 million people could be practically uninhabitable.

This non-profit organization created a map that allows us to visualize the threat of rising sea levels and shows that Latin America is not left out. We show you here some of the places that could permanently drop below the high tide line by 2100.

How many will be affected by rising sea levels? 0:46

The map of Latin America

Both the west and east coasts of Mexico are threatened by rising sea levels. According to Climate Central’s projection, in less than 80 years parts of the Yucatan Peninsula could be below water level. Lands in Quintana Roo, Yucatán, Campeche and Tabasco would be affected.

Going west, the threat is seen mainly along the coasts of Sonora, Sinaloa and Nayarit.

The Nicaraguan and Honduran coasts

Nicaragua and Honduras are two of the countries in the region that know firsthand what it means to deal with the consequences of global warming, that makes hurricanes more dangerous.

Help is still awaited in Nicaragua 4 months after the hurricanes (March 2021) 3:37

On the east coasts of both countries, areas are identified that could be under water as a result of rising sea levels.

The study published in 2019 warns precisely that “coastal communities around the world must prepare for futures much more difficult than can currently be anticipated.”

In Colombia, two areas stand out by extension: one near Barranquilla (the mouth of the Magdalena River in the Caribbean Sea) and another towards the border with Panama (the Gulf of Urabá).

Venezuela: the coast around Lake Maracaibo

As can be seen in the map below, in the case of Venezuela there are identifiable foci in the surroundings of Lake Maracaibo and Tucupita. If one follows the route east and south, the threat is also visible in Guiana, Suriname and French Guiana.

It is worth mentioning that the study mainly highlighted the potential risks in Asia, because about 70% of the people at risk of annual floods and permanent floods are in eight Asian countries: China, Bangladesh, India, Vietnam, Indonesia, Thailand, the Philippines and Japan.

Brazil: a threat from north to south

Brazil, with its more than 7,000 kilometers of coastline on the Atlantic Ocean, faces threats as far north as the state of Amapá and as far south as the state of Río Grande do Sol. Some of the areas that could fall under the High tide lines are permanently close to key cities such as Porto Alegre and Rio de Janeiro.

Eight famous beaches could disappear in no time 1:02

And speaking about Rio de Janeiro, a note: in recent years the danger faced by the famous Copacabana beach due to rising sea levels has become evident. And it is far from the only one threatened.

A 2020 study published in Nature Climate Change states that half of the world’s beaches could disappear by the end of the century.

Uruguay: the east coast, home to some of the most valued tourist spots

If we continue south and cross the Brazilian border, we can see that the eastern coast of Uruguay also has threatened points, in the departments of Rocha and Maldonado, for example, which are recognized worldwide for some of their cities and beaches such as Punta del East or Cabo Polonio. As is the case in the north, in several cases this increase in the level would have an impact on the surroundings of lagoons or other bodies of water.

Argentina: outbreaks in the provinces of Entre Ríos and Buenos Aires

Among the various points that are visualized in Argentina, two areas stand out: one in the province of Entre Ríos, where rivers such as the Ibicuy and the Paraná run, and in the province of Buenos Aires, at the height of the Samborombón bay.

Behind the rise in sea level is a reality that we hear more and more about: global warming. This phenomenon causes the water level to rise for two reasons, as explained by the United States Oceanic and Atmospheric Administration (NOAA). On the one hand, it contributes to the melting of ice sheets and glaciers and, on the other, “the volume of the ocean expands as the water warms.” The agency mentions another phenomenon that also contributes to the rise in sea level, although to a lesser extent, which is “a decline in the amount of liquid water on land,” in reference to lakes, reservoirs and aquifers, among others. “This displacement of liquid water from the land to the ocean is largely due to the pumping of groundwater,” he explains.

In addition to the pumping of groundwater, other factors that aggravate the effects of sea level rise include the extraction of materials from the soil and the production of sediments that are happening near the coasts and cause the land to sink.