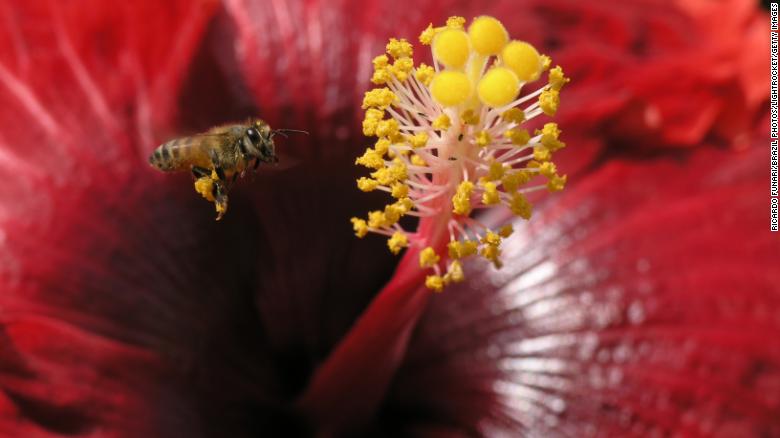 There are fewer wild bees in public records 0:46

(CNN) – There is much to love about bees.

They are crucial to growing many of our favorite and healthiest foods, as they move pollen from plant to plant, pollinating more than 100 fruits and vegetables, including strawberries, potatoes, and apples.

Unfortunately, many species of bees are threatened as a result of changes in land use, pesticides, intensive agriculture, and climate change, but there are steps you can take to help them thrive.

In honor of World Bee Day On May 20, here are five surprising things you might not know about nature’s hardest-working pollinators.

A bee pollinates a flower in Nova Friburgo, in the state of Rio de Janeiro, Brazil.

Bees can communicate and make decisions by dancing.

When a bee searches for and inspects a new nest, it uses a waggle dance to announce and debate its merits. The better the site, the longer and harder the bee will dance. If another bee bumps into a dancing bee, it will go inspect the place and, if it likes it, it will also wiggle.

Over time, the dynamics of the wag dance causes between 20 and 30 bees to agree on the best place to nest, and they communicate their decision to the rest of the swarm by making high-pitched sounds and buzzing their wings among the other bees.

2. Bees can use tools

This is how bees defend themselves from killer hornets 1:43

Bees in Vietnam and other parts of Asia are threatened by predatory species of giant hornets that attack bee colonies, killing the adult ones defending the nest and attacking the young bees. In particular, the voracious Vespa soror hornet species is capable of destroying the hive in a matter of hours.

To protect themselves from such attacks, bees have been observed collecting fresh animal feces and smearing it around the entrance to their hive. The researchers, who published their findings last year, they called it “fecal spotting.” The study team believes that the poop repels predatory hornets (which are similar to killer hornets) from the nest by reducing the time the hornets spend trying to break out of the nest.

“Fecal spotting stands out as extraordinary for several reasons. It is the first report of honey bees of any species looking for materials that are not derived from plants or water-based fluids. It is also the first clear example of honey bees using a tool in nature, ”the study said.

3. Bee poop almost sparked a confrontation in the Cold War

In the 1980s, it was thought that “Yellow rain”, small yellow spots found on jungle foliage in Laos and Cambodia, were residues of chemical weapons. The refugees said the yellow rain caused illness and death. The accusations led the United States to accuse the then Soviet Union and its allies of chemical warfare.

Bee experts later discovered that the yellow dots were excretions from massive swarms of wild bees.

4. Bumblebees have a bad temper when they are hungry

Plants produce dazzling, nectar-laden flowers to attract pollinators, but what can an impatient, hungry bumblebee do when those flowers haven’t bloomed yet?

When pollen was in short supply, bumblebees damaged the leaves of tomato and mustard plants in a unique way that resulted in the plant blooming up to 30 days earlier than the non-nibbled plants, they found. scientists in Switzerland and France.

For bees, pollen is a source of protein that they need for their young.

However, warmer temperatures as a result of the climate crisis mean that bees wake up earlier after hibernating for the winter to find the flowers they need for food that have not yet bloomed. Flowering time, which depends on exposure to light, is less affected by climate change. This creates a mismatch that can leave bees without food in early spring.

5. Humans have been exploiting bees for thousands of years

Bees on a honeycomb at the Urban Bee Hive in Woolloomooloo on May 14, 2021, in Sydney, Australia.

A cave painting in Spain believed to be 8,000 years old shows a human collecting honey from a ladder. Traces of beeswax on ceramics also suggest that the first farmers had bees 9,000 years ago. Honey has also been found in ancient Egyptian tombs.

Honey was probably a rare delicacy in a prehistoric diet that had few sweet foods and could have had medicinal uses. The beeswax could have been used to make waterproof pots or as a glue.

Today, honey may offer new hope in the fight against antibiotic resistance. Contains natural antibiotics to help the body fight infection. Scientists are working on ways to make the sticky substance easier to apply to wounds and could be used in surgeries, war zones and in our own homes.