2:52 p.m. : In turn, the prefecture of Essonne sees its decree imposing the health pass in large shopping centers suspended by administrative justice. This suspension is justified by the need to be able to access basic necessities and public transport connected to some of these places, according to France Bleu Paris.

14:41 : “At least 1000 people”, say the demonstrators on the podium, at the start of the antipass demonstration in front of the town hall of Bayonne. The mobilization seems down compared to last week, where there were between 2 and 3,000 demonstrators . # manif28août #PassSanitaire https://t.co/dvE72qZTeW

14:41 : France Bleu Pays basque also reports an apparent drop in the number of demonstrators in the Pyrénées-Atlantiques.

2:35 p.m. : Mobilization in decline in some cities. According to the authorities, 2,000 people took part in the demonstration against the health pass this morning in Aix-en-Provence (Bouches-du-Rhône), against 2,500 last Saturday. In Mont-de-Marsan (Landes), they were only 110, half less than a week earlier.

• The right is presented in dispersed order for its political return. While Xavier Bertrand still refuses to take part in a primary, Valérie Pécresse claims that there is “nothing more democratic than the primary to designate a single candidate”. Follow our direct.

• For the seventh consecutive weekend, tens of thousands of people demonstrate in France to oppose the health pass. The authorities expect a further decline in mobilization figures, which attracted 175,000 people last Saturday. Follow our direct.

• France has ended its evacuation operation of nearly 3,000 French and Afghans, last night. Faced with the Islamic State group, “we must not let our guard down”, warns Emmanuel Macron, in Iraq, before a summit on the situation in the Middle East.

• The French harvest is accelerating in Tokyo. The French delegation won nine new medals today, including a gold for Alexis Hanquinquant in the triathlon. With 19 medals, including three gold, France is 13th in the ranking of nations. Follow our direct.

2:17 p.m. : Several of you, in the comments, are indignant at the media coverage given to opponents of the health pass, which is your right. However, we believe that it is our duty to report on these mobilizations, which attract a large number of citizens every week. However, we do not deprive ourselves of regularly dissecting the arguments put forward in the processions.

1:45 p.m. : Would Eric Clapton march against the sanitary pass? The British guitarist has just released a clip for denounce measures restricting liberty imposed on the UK to fight the pandemic. He is also worried about the climatic danger for the younger generations. “That is enough”, he sings.

12h51 : News of the demonstrations against the health pass, as here in Nice, where traffic was briefly disrupted by the rally.

12:41 : As with the “yellow vests”, the sanitary pass “are part, for a certain number of them, of what is commonly called the middle classes“, adds Stéphane Sirot. “These are people who abstain a lot from elections (…) and also have a marked tendency to blank votes.”

12:38 : What common points between demonstrations of “yellow vests” and those of opponents of the health pass ? “Since the ‘yellow vests’ has settled down in a way the demonstration on Saturday, which will bring together beyond the world of work, bring together everyone, including families”, notes Stéphane Sirot, historian, specialist in strikes and unionism.

• As every weekend since mid-July, tens of thousands of demonstrators are expected in around 200 cities in France to oppose the health pass. The authorities expect a further decline in mobilization figures. Follow our direct.

• Facing the Islamic State group, “we must not let our guard down”, warns Emmanuel Macron, in Iraq, before a summit on the situation in the Middle East. Yesterday evening, France put an end to its evacuation operation of nearly 3,000 French and Afghans.

• The French harvest is accelerating in Tokyo. The French delegation won nine new medals today, including a gold for Alexis Hanquinquant in the triathlon. With 19 charms, including three gold, France is 13th in the ranking of nations. Follow our direct.

11:31 : No need to health pass in the main shopping centers of Haut-Rhin. The Strasbourg administrative court yesterday suspended the prefectural decree establishing this obligation. Advanced reproach: the text did not provide “no development” for access to basic necessities. 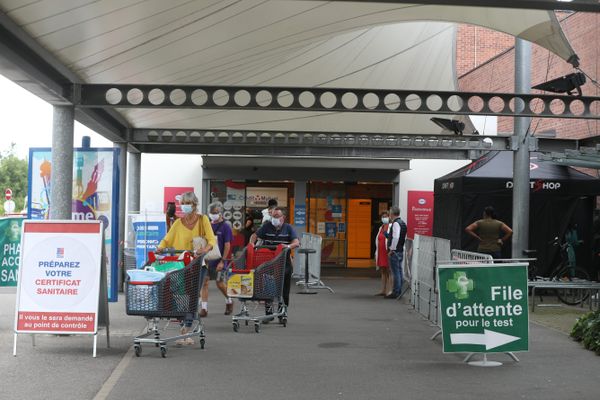 11:25 a.m. : Important gatherings are also planned in the South, where the protest remains very popular. The authorities are expecting 9,000 people in Montpellier (2 pm) and 5,500 protesters in Toulon (2 pm).

11:23 : Four processions are planned in Paris, where the authorities are waiting between 12,000 and 20,000 demonstrators. The principal will leave at 2:30 p.m., in front of the Military School, at the call of Florian Philippot, leader of the Patriots.

11:15 a.m. : For this seventh weekend of demonstrations against the health pass and the government’s policy in the face of Covid-19, territorial intelligence expects to see “between 140,000 and 180,000 demonstrators” scroll across the country, according to a police source quoted by AFP.

11:13 : Anti pass demonstration at Mont de Marsan about 50 participants welcomed by a bronca of people present on the market this Saturday morning. It might be time for journalists to also show that the vast majority of people are fed up with the actions of a very small minority of activists without any gumption.

11:13 : Beginning of the demonstration against the #passsanitaire in Aix en Provence https://t.co/g5WTHBxOwe 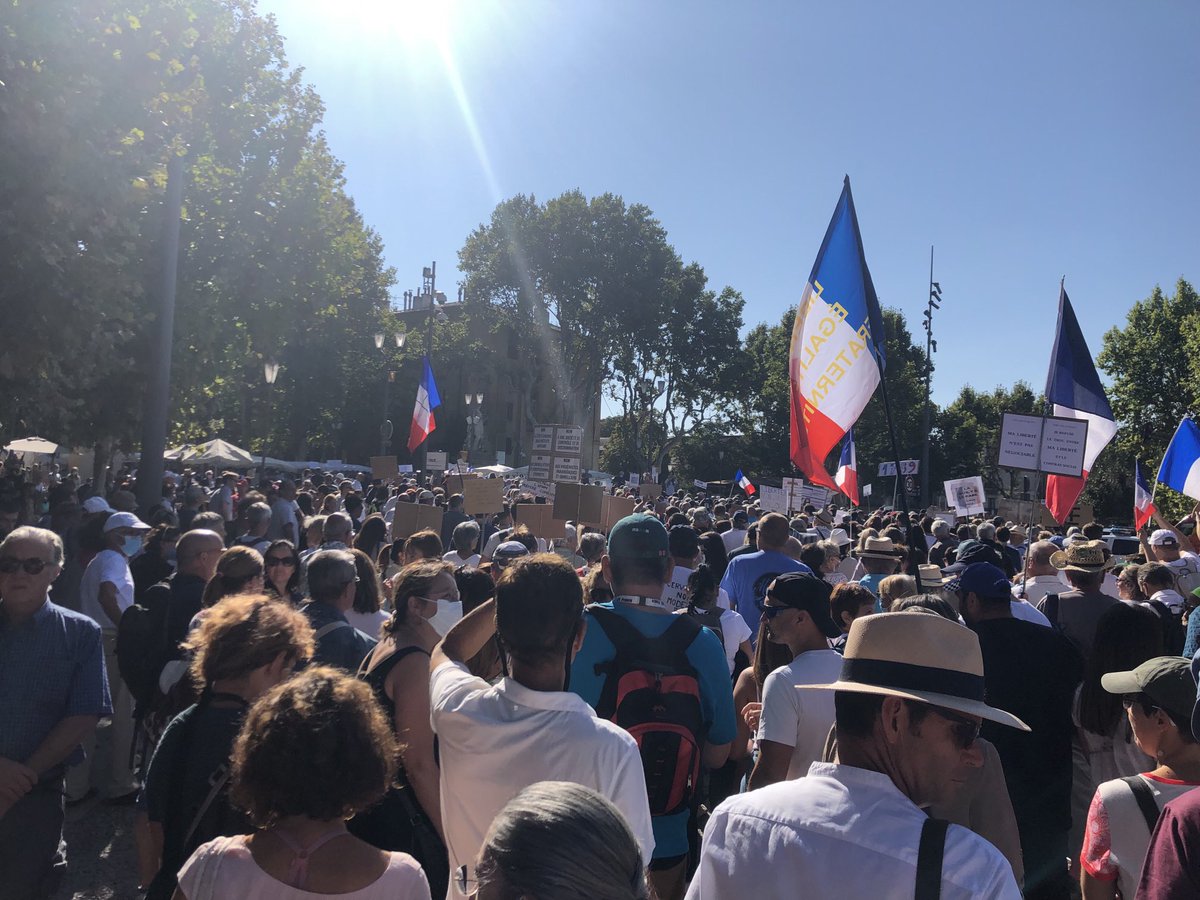 11:20 a.m. : The first processions of opponents to the health pass, as in Aix-en-Provence, set off this morning. In the comments, @Alain affirms that the demonstrators in Mont-de-Marsan were entitled to an icy reception from some of the customers of the market.

11:01 am : Do you have a question about vaccination? We may have the answer. To have a clear idea on the question of the vaccination obligation or the third dose, among others, do not hesitate to browse our frequently asked questions about Covid-19 vaccines.

10:03 : New study sheds light on the severity of the Delta variant. In an article published by The Lancet Infectious Diseases, researchers conclude that people infected with the variant identified in India have twice as likely to be hospitalized than those contaminated by the Alpha variant, identified in the United Kingdom.

09:51 : “The report by the US intelligence community shows that the United States is determined to take the wrong path of political manipulation.”

After the publication of a US report accusing Beijing of withholding key information on the origins of the pandemic, China responds by denouncing “a presumption of guilt” and a desire from Washington to “make China a scapegoat”.

• In the aftermath of the attack which killed at least 85 people at Kabul airport, the United States carried out a drone attack on a “organizer” of the Afghan branch of the Islamic State group, according to the US military, which believes it has “killed the target”.

• Paris announces that it has ended, last night, its operation to evacuate French people and endangered individuals in Afghanistan. “Almost 3,000 people, including more than 2,600 Afghans”, have been “put in safety” by the French military, according to the Ministry of the Armed Forces.

• A few days before the start of the school year, more than 200 demonstrations are planned today in France to oppose the health pass. The authorities are expecting a third consecutive weekend of decline in mobilization, which began at the beginning of the summer.

• Rain of medals last night for the French delegation in Tokyo. The triathlete Alexis Hanquinquant opened the ball with a gold medal, followed by money for Marie-Amélie Le Fur in the long jump and bronze in six other events.

Regions, that’s how much they spend on surveillance services

How much do the Italian regions spend on surveillance, custody and reception services? To calculate it, a report...

There are 1,029 new covid infections in Veneto according to today's bulletin, May 29th. On the other hand,...

Sievierodonetsk, at the heart of the...