REPORTING. Presidential: the militants of rebellious France fear the division of the left and the absentee – franceinfo

For once, a polling institute is applauded by the activists of La France insoumise. Thursday August 26, in Châteauneuf-sur-Isère (Drôme), Jean-Daniel Lévy, deputy director in political strategies and opinion of the Harris Interactive institute, is the guest of the movement of Jean-Luc Mélenchon for the launch of its summer schools. The pollster was responsible for testing 42 of their defended proposals with a sample of 1,241 French people, who were unaware of the sponsor of the survey.

Thus, 76% of respondents say they are in favor of increasing the minimum wage to 1,400 euros net per month; 68% lower taxes for people earning less than 4,000 euros per month; 63% at the convocation of a constituent assembly for a Sixth Republic… A final verdict: “Of the 42 measures that we have been brought to test, all without exception have received an assent and a positive judgment”, reveals Jean-Daniel Lévy. Before adding: “If there was a clear link between judgment with regard to the program and electoral behavior, we would avoid making voting intentions in the second round because you would pass in the first round.” Facing the platform, the crowd of activists is full. the “comrade” Lévy is entitled to his ovation.

Eight months before the presidential election, Jean-Luc Mélenchon’s movement rings the alarm clock. With between 4,000 and 5,000 people expected throughout the four days of these summer universities, La France insoumise intends to make a show of force. And the announcement by Jean-Luc Mélenchon, Thursday morning, that this campaign would be his last is an additional motivation. “I cannot tell myself that Jean-Luc will not be President of the Republic”, confesses Baya, 52 years old, from Mulhouse (Haut-Rhin). This activist who has followed Jean-Luc Mélenchon since his fight against the European referendum in 2005 says she is convinced that “this time will be the good one”. 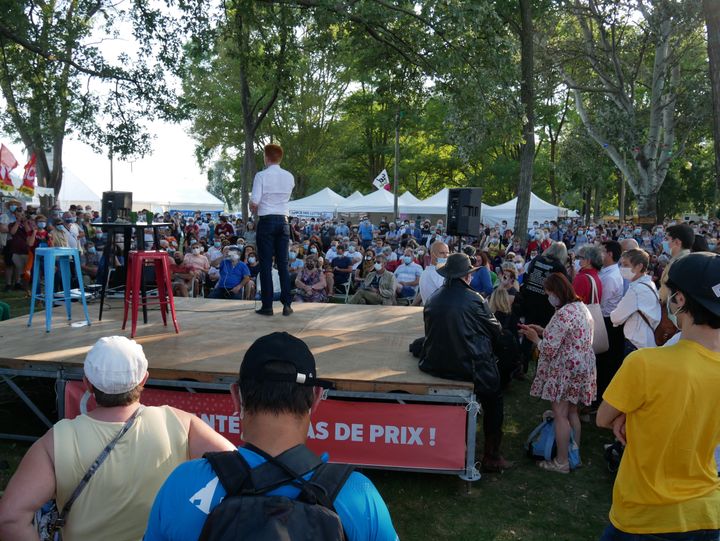 From 4,000 to 5,000 activists have registered for the summer universities of La France insoumise in Châteauneuf-sur-Isère (Drôme) this year, a figure up 40% compared to 2020. (MATHIEU LEHOT / FRANCEINFO)

The summer universities conclude the holidays under the sign of mobilization with the arrival on site of three caravans which crisscrossed the working-class districts throughout the month of August. With this operation, La France insoumise wanted to re-mobilize an electorate which has traditionally been acquired but which did not move very much in the June elections. The specter of seeing the record abstention from the regions recurring in the presidential election is a scenario that Jean-Luc Mélenchon’s movement wants to avoid at all costs. According to political science researcher Jean-Yves Dormagen, who came to Châteauneuf-sur-Isère to warn the activists, the risk of abstention is 48% for Jean-Luc Mélenchon, while it is only 30% for Emmanuel Macron and 38% for Marine Le Pen.

But beyond this threat, Jean-Luc Mélenchon does not take off in the polls. Soon a year after his declaration of candidacy, on November 8, 2020, the leader of LFI stagnated around 11% of voting intentions. “We are on a high level, insofar as we remain above the other candidates of the left. But there, it does not move, it is not good”, entrusts an old apparatchik of the movement to franceinfo. Before adding, a little resigned: “Divided, we won’t make it, that’s for sure.”

In fact, the left is fragmented in this re-entry. In addition to environmentalists, who are organizing a primary to nominate their candidate, the Communist Party (PCF), a historic ally of rebellious France, is also apart behind its national secretary, Fabien Roussel. While on the side of the Socialist Party (PS) the candidacy of the mayor of Paris, Anne Hidalgo, seems to be less and less doubt while Arnaud Montebourg, ex-minister of François Hollande, maintains the suspense over his own participation.

By highlighting “a majority of membership” part of its program, La France insoumise hopes to place itself above the fray and divisions. This is also the whole point of the slogan “People’s Union” inscribed in capital letters on Jean-Luc Mélenchon’s campaign poster, and whose Greek letter phi, symbol of the La France insoumise movement, has been erased.

But this strategy is not enough to allay the concerns of several activists. Eric Degenne, a 54-year-old railway worker from Amboise (Indre-et-Loire), does not hide his fears for 2022.

“With the multiplicity of left candidates, it will be complicated.”

This early activist has been following Jean-Luc Mélenchon since the early 2000s. He had joined the Socialist Party “for him”. And he’s never left it since. His LFI badges, pinned to his polo shirt, are displayed like trophies. “These you will not find anywhere. They are personalized.“, he laughs. The activist spent part of his summer in the caravans of the Popular Union. “I bought my own barnum for that. It’s three by three meters. We set tables, we make coffee and we talk to people, explains Eric. We see with them whether they have access to all the aid to which they are entitled, we try to give them a different image of politics and we put them on the electoral roll. “

A little further on the campus, Françoise Godin, 59, from Noisiel (Seine-et-Marne), comes to recharge her activist batteries. “We come here to reboost ourselves, to strengthen ourselves”, she specifies. Its leitmotif: to convince. “You have to know how to talk to people. Our role is to make them understand that school, their daily life, everything is political.” But this member of La France rebellious since its creation in 2016 does not hide it: for some time, she has doubts. A few months ago, she even thought of stopping everything. “I am in a jump ball phase, I hesitate”, recognizes this school principal in the ZEP priority education zone, who adds a little embarrassed and with emotion: “I like Jean-Luc. But I start to wonder what the point of campaigning is. ” It is up to the leader of the “rebellious” to convince the activists on Sunday when he takes the stand.

Previous articleKabul, foreign ministry tweet for the consul: “Welcome back Tommaso”
Next articleOM, OL, Monaco: the calendar of the Europa League is known (off) – Foot National

CURRENT Telekom reports extensive problems: The website does not work, you do not even walk in their stores! – Topky.sk

The telecommunications company said it had already undertaken several analyzes to evaluate the overall impact of the attack and...

Reduce electricity consumption. This is what the Japanese government asked the inhabitants of Tokyo and surrounding areas, the...

Azuradee France, mother of the boy found in a freezer in the basement of her home in Detroit. ...

At least 17 people without signs of life were found on Sunday at a nightclub in East London, South...

"A few talks and many facts: the political movement Sud Chiama Nord will again involve citizens, today more than...

CURRENT Telekom reports extensive problems: The website does not work, you do not even walk in their stores! – Topky.sk

The telecommunications company said it had already undertaken several...
World

Reduce electricity consumption. This is what the Japanese...
World

Azuradee France, mother of the boy found in a...
World