The title of Patrik Hartl’s film Element, Shampoo, Dot and Charles sounds a bit like a puzzle and a bit like an email address. Both fit – the story contains an age-old riddle of how to become happier, happier, but solves it in a modern way. Factual, concise and dynamic, as is the custom today – even serious matters need to be decided quickly, but the implications are as relentless as ever.


The four friends are made up of Czech film stars – Martin Hofmann, Martin Pechlát, Hynek Čermák and David Švehlík.

This is also the case with the story of a new Czech film, which was based on the book of the same name by director and writer Patrik Hartl. At first it seems that everything is just fun, that problems can be solved even by an illusory return to youth. However, it turns out that everything is different. Even the relationships in a group of four former classmates who fully trust each other are not entirely fair. The fact that they strip naked in public to protest against their own destinies and consider it the pinnacle of courage and truthfulness will not help to restart their lives, which are in the crisis of the Middle Ages.

With this shock therapy, they do not want to provoke the public as much as to awaken their own self-confidence. The motif of nudity arouses great interest in the film, and it also arouses embarrassment for some, although the actors are certain of the level. After all, the four stars of Czech film play – four friends – Martin Pechlát, David Švehlík, Hynek Čermák and Martin Hofmann. According to the agreement, they have to start undressing at some point, wherever they are. This creates grateful situations, because random witnesses, wooden or yak, panic occurs.

Friends with nicknames from the title of the film are known from the grammar school. At a meeting after 20 years, they get drunk and trust each other that they are not living the life they want at all. They walk through night Prague along the Vltava (Hartl made a very nice film visually), they stagger a bit, but above all they philosophize. The four want to get rid of fears, shyness, hypocrisy, they do not want to adapt more. He intends to start with a recession, so he chooses nudity as a means. After all, patients also undress before therapy! Everyone can undress, but the goals are different. Each of the men is looking for something different. Some have no money at all, others have too many, some have trouble conceiving children, others have too many children, one has to throw worshipers out of bed, others can’t find one. The common idea of ​​shocking with nudity starts the healing process, but then everyone’s personal story unfolds. 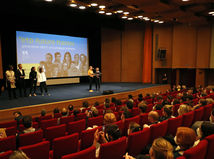 Many similar films have been made, Hartl’s film is strange in that his face is happier than he really is. The viewer has fun, laughs, and doesn’t even realize how he delves into the pains of today’s world. After watching the film, he feels light, but at the same time he is moved by the outcome of the story: Nothing can be neat, projects that want to change their destinies by speculation usually fail. But it’s worth a try, something will change. The strength of Patrik Hartl is the internal overpressure of feelings and experiences that he wants to pass on to the viewer. The film is full of strange situations, original dialogues that move the story and deeper expose the characters. Hartl cast outstanding actors in the supporting roles, who will play every detail as a key moment. Whether it is a mother-son relationship presented by Daniela Kolářová and Hynek Čermák, or a one-sided love relationship portrayed by Bára Poláková. 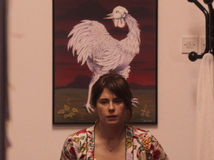 Read also In Karlovy Vary, they peeked into the choir room and under the hood

Patrik Hartl gave the actors space, freedom, they are his partners. He turned the book into a film very naturally. There is a modest apartment and magnificent housing, and the bright lights of the big city, as well as a pile of leaves in the cemetery, the environment of the company and the gay club. The scene from the shooting of an advertisement for an instant soup, in which carrots, peas and other vegetables are danced to a gentle melody, is charming. It is not only an image of a gossip in filmmaking, but also in life. The insignificant filmmaker has all the attributes of the big world of film: the director is a star, full of nice women around, the dictates of the producer, the fight for the role. The artificial world. Hartl understands the characters, but immerses himself more in the world of men, while the characters of women whine enough.

However, the actresses play well, among them several Slovaks – Jana Kolesárová, Zuzana and Soňa Norisová and Petra Polnišová. Kolesárová is beautiful, Zuzana Norisová materská, and with a comedic touch she plays a doctor examining Hynek Čermák’s urology Soňa Norisová and her sister Irenka Petra Polnišová. Čermák, Pechlát, Švehlík, Hofmann have a solo, who created a great naked quartet, exposing not only bodies but also souls. He looks at them well. Patrik Hartl is a sovereign creator who holds the reins of the work firmly in his hands, has it thoughtful and well built. In every scene, even the happiest, there is a shade of bitterness, a hint of impending tragedy, sadness. The viewer feels compassion and this is a value that few can evoke with their art.

Several Western leaders, such as Emmanuel Macron and Joe Biden, will close the G7 summit in Germany this morning...

Guilty of a bad gesture during the group match against Saudi Arabia, Zinedine Zidane lived intensely the round of...

ONLINE: NATO will significantly increase the number of troops in the Rapid Reaction Force TVNOVINY.sk TVNOVINY.skZelenskyj wants the...

Several Western leaders, such as Emmanuel Macron and Joe...
World

Guilty of a bad gesture during the group match...
World

ONLINE: NATO will significantly increase the number of troops...