Slovak hockey players play in group D, in which, in addition to them and Austria, Poles and Belarusians also play. Only the winner of the group advances to the Olympics. After the first matches played, the Slovaks have the first place.

The Slovaks entered the match more actively, Jaroš got in the opening minute from the blue line, but the Austrian defense blocked his shot. In the first minute, he could overcome the goalkeeper Kickerta Pospíšil, who took the pass on the offensive blue line, pushed with the puck to the end, but Kickert kicked the puck with his shoulder.

The Slovak team came out to enter the match, Hudáček scored in the 2nd minute

At the end of the second minute, the Slovaks already scored. Čerešňák got to the puck, who noticed a free Hudáček in the right circle and he opened the score of the match with a shot from the first. The Slovaks continued to press, but they did not manage to overcome Kickert at the Austrian gate. He could rest after Jurčo left for the penalty bench, who tripped his Austrian opponent.

Coach Ramsay’s charges played the initial weakening without major problems, leaving the Austrian hockey players in no chance. After Jurča’s return from the penalty bench, he was able to increase the score in favor of Slovakia Daňo, who in the sixth minute tried Kickert’s attention from an angle, but his shot was stopped by a stick. The Austrians had the first greater chance in the next counterattack, Wolf got to the end, but Konrad stopped his shot.

Kelemen had another chance to score, in the eighth minute he got into a separate run, but at the end he was attacked by the Austrian defender. Unterweger went to the bench for chopping. Immediately after the throw-in, Zündel threw the puck into view and the Slovak hockey players played a two-minute power play for two players. During the double power play, Jaroš presented himself with a shot, Kickert started his attempt. The Austrians successfully defended themselves.

An unused power play by two players slowed down Slovakia’s offensive efforts. The Austrians were also bound by the combination in the middle of the field and failed to cross the offensive zone. After 15 minutes, the Slovak team found a way to get in front of the Austrian goalkeeper, Grígar, but his teammate’s pass did not turn into a goal. Subsequently, the Austrians were given a chance to equalize, the offensive foul was performed by Pospíšil, he tripped the opponent at the mantinel.

As in Austria’s initial power play, Konrád did not have to deal with any opponent’s chance in the second weakening. In the second minute of weakening, Studenič significantly helped him, who took the puck into the offensive zone and four Austrian hockey players could not take it from him. The last minute of the opening period took place in front of goalkeeper Kickert, six seconds before the end of the period it was eliminated again. Austrian Ganahl went to the penalty area for hooking.

Gernát surprised the Austrian goalkeeper with a shot from the mantinel

At the beginning of the second period, coach Ramsay’s charges finished the power play, they could not get the offensive zone for a long time. They managed to do so at the end of the opening minute, a few seconds later Jaroš sent a pass to Cehlárik, the native from Žilina fired, but Kickert managed to push the puck out of the goal in the Austrian goal. The Slovaks did not use this power play either.

Slovak hockey players tried to bounce off the opponent on the difference of two goals, they pushed into the offensive zone, but the Austrian defenders did not let them shoot. At the beginning of the 24th minute Grman used his speed, went through the defense, but shot over the opponent’s goal. A minute later, the Austrian players threatened, they renumbered two to one, but Marinčin blocked the final pass.

A few seconds later, the first Slovak offensive formation appeared in front of Kickert. First, the goalkeeper of Austria was checked by Hrivík, then from behind the goal he passed in front of her, where Cehlárik was, but even he did not score his first goal in the Olympic qualification.

The pressure was interrupted by the exclusion in the 26th minute, the foul in the attacking zone was performed by Hudáček. The Austrians did not use the power play because Baumgartner did not finish his teammates’ combination. Kelemen got to the rebounded puck, who came with him to the offensive zone of Slovakia and checked the attention of the Austrian goalkeeper with a shot, the score did not change.

In the middle of the 29th minute, coach Ramsay’s charges got into the offensive zone. Studenič passed to Čerešňák, Kickert fired his shot at the guardrail, where Gernát came to the puck. The Slovak defender did not have a free teammate, so he tried to shoot at the goal and surprised the Austrian goalkeeper. The Slovaks led 2: 0.

After the second Slovak goal, the Austrians began to finish the fights. Exactly halfway through the match, the referees sent Lantoši and Wolf to the penalty bench, who gave a few strokes behind Kickert’s goal. In a 4 on 4 game, neither team endangered the opponent’s goalkeeper.

At the end of the 35th minute, Jaroš appeared in the attacking zone and Ružička ran on his pass, Kickert moved and stopped the puck heading for his goal. A minute later, Ďaloga found Kelemen twice, the Austrian goalkeeper only had to intervene at the opening chance. The second time Kelemen missed the gate. The Slovaks finished the second period in a power play, Raffl went to the penalty area for chopping. The match score has not changed.

The Austrians lowered thanks to Lebler, they could not cope

The introduction of the third period by the Slovak hockey players came out, in the 42nd minute Lantoši got to the end, but Kickert pushed against the left pole and stopped the puck. Less than 60 seconds passed and the Austrian goalkeeper had to intervene again, Studenič entered the offensive zone, fired and Kickert pushed out of the goal with his shoulder. Daňo got to the repulsed puck, but did not send the puck to the open gate.

Then Coach Ramsay’s charges withdrew and tried to defend the two-goal lead. After 45 minutes, the Slovaks lost the puck in the defense zone, who took over Lebler, the Austrian got to the axis of the field and shot at the goalkeeper Konrád. However, the guardian of the Slovak gate reflexively set off the puck on the safety net.

The Austrians tried to score a contact goal, close to him was Ganahl, who shot the teammate’s shot, in the same minute endangered Konrád and Unterweger, but the Slovak goalkeeper remained unbeatable. Raffl released the Slovaks from Austrian pressure, who went to the penalty bench for chopping.

The Slovak national team played for almost two minutes in the offensive zone, Hrivík, Jaroš and Ružička got into the shots, but Kickert did not have to pull the puck out of the goal. The Austrians also successfully defended the sixth Slovak power play.

Konrad rested for a moment, but the pressure from Austria continued after successfully managing the weakening. Ulmer was able to reduce, in the 52nd minute he endangered the Slovak goalkeeper, but he was not successful. Lebler was also active, his shot from the 53rd minute was still stopped by Konrád, but ten seconds later the Austrian player was already looking forward to the goal. Lebler found the puck in the goal area and sent it to the gate.

The Slovaks were given a chance to answer, in the 54th minute Haudum finished the fight at the mantinel and the referees sent him to the penalty bench for a consultation. Right at the beginning of the power play, a scrum arose in front of Kickert, five players lay on the Austrian goalkeeper, but the puck did not get behind the goal line.

The Austrians had the best chance in the power play of Slovakia. Wukowits and Obrist got into the renumbering 2 to 1, the latter got a pass on skates and could not finish in the open goal. Čerešňák also did a good job, obscuring the view of the Austrian player.

In the end, the Austrians tried to recall the goalkeeper and sent the sixth striker into play. 24 seconds before the end of the third period, an empty gate was revealed in front of Lebler, but the Austrian forward could not equalize. There was no more in the match, the Slovaks won 2: 1.

“It was a difficult match. After all, a lot of guys didn’t have a match behind them. It was felt in the third period that we lacked wrestling practice. Maybe it was because we’re not so playful. We practiced power play for two days, next time it will be better. I’m proud to lead the boys and set an example for them. The Poles won against the Belarusians, seeing that they know how to play hockey. I believe that tomorrow we will play better and we can win. Braňo supported us, he is an excellent goalkeeper. He knew that he would hold us, “said Marek Hrivík, the captain of Slovakia, after the match.

“It felt like it was the first game of the season, for most guys. We scored the first goal, the second helped us, but in the third period we started speculating what the opponent used and scored the contact goal. Then we played skillfully, especially the last two minutes. I think that Braňo Konrád supported us, he didn’t have many shots, but he performed difficult interventions. If we took the chance, we scored four goals, it would be calm until the end. For powerlifting, we have to watch the video, during the match we tried to change some things, go more into the shot. I think it should get better over time. I think it will be similar against Poland as against Austria. All fans think that it will be a final match against Belarus, but the Poles performed well today, they have a good goalkeeper. Nothing easy awaits us, we have to win. Everyone has it in their head, “said Ján Pardavý, assistant coach. 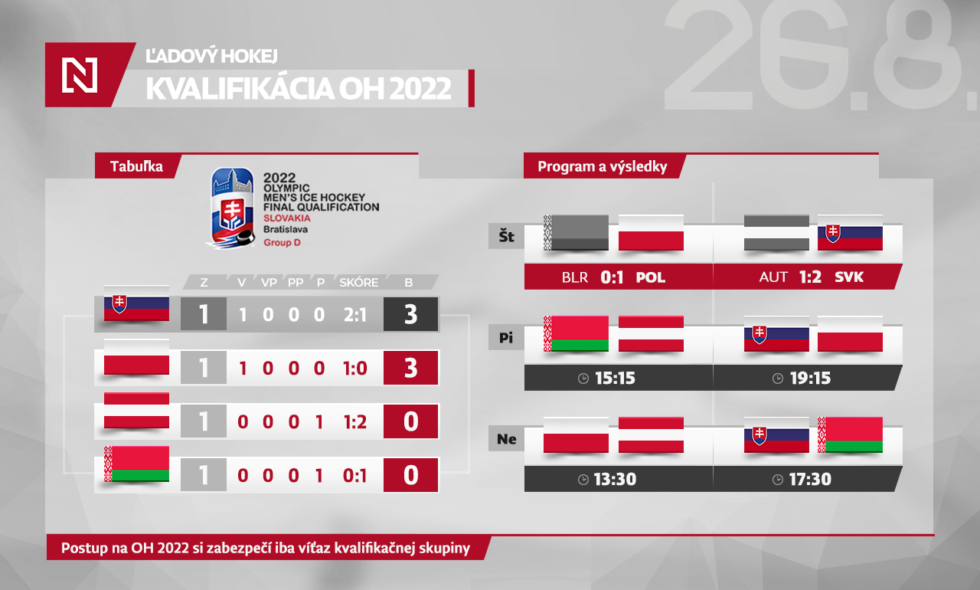 Previous articleFormer European Commissioner Michel Barnier announces that he is a 2022 “presidential candidate” – franceinfo
Next articlePresidential 2022: Laurent Wauquiez gives up standing for the LR primary – LCI

How can I vote in the Colombian Presidential Elections if I live abroad?

This is the new migration challenge facing Colombia 2:41 (CNN Spanish) -- In the presidential elections in Colombia, which...

Široký rewrote the stately palace for his children. His name is also mentioned in the case Purgec – HNonline.sk

In one of the most lucrative parts of the capital, property has somehow been transferred to family members in...

(CNN) -- A couple was attacked by a bear inside their northern Wisconsin home Friday night after the animal...

How can I vote in the Colombian Presidential Elections if I live abroad?

This is the new migration challenge facing Colombia 2:41...
World

Široký rewrote the stately palace for his children. His name is also mentioned in the case Purgec – HNonline.sk

In one of the most lucrative parts of the...