Find here all of our live #AFGHANISTAN

3:59 p.m. : To all our Afghan friends: if you are near the airport gates, get away urgently and take cover. A second explosion is possible.

3:58 p.m. : The Ambassador of France in Afghanistan, David Martinon, asks on Twitter to those who are near the gates of the airport to move away “urgently” because “a second explosion is possible”.

3:51 p.m. : We can confirm an explosion outside Kabul airport. Casualties are unclear at this time. We will provide additional details when we can.

3:51 p.m. : The Pentagon is not yet able to say if there are any injuries. “We will provide further details as soon as we can”, says its spokesperson, John Kirby, on Twitter.

3:49 p.m. : An explosion sounded near Kabul airport, announces the Pentagon.

3:41 p.m. : The Loire-Atlantique prefecture announced the arrival of 88 Afghans last night in the town of Piriac-sur-Mer, near Guérande, reports France Bleu Loire Océan. These are mainly families, lodged in the Razay holiday center, a summer camp which no longer accepts children. The Afghans are welcomed there for a month, they will benefit from social and psychological support, assures the prefecture.

3:16 p.m. : Evacuation operations in Kabul will not be wrapping up in 36 hours. We will continue to evacuate as many people as we can until the end of the mission. #HKIA

3:16 p.m. : “We will continue to evacuate as many people as possible until the end of the mission”Pentagon spokesman John Kirby tweeted, as the pace of departures begins to slow and many US allies announce the imminent end of their own operations.

3:16 p.m. : Evacuations from Afghanistan will continue “until the end of the mission” planned for August 31, said the US Department of Defense, denying that they could end “in 36 hours”.

• Matignon specifies that the vaccination campaign for a third dose of vaccine against Covid-19 will begin in nursing homes from “September 13”. Follow our direct.

Frenchman Axel Bourlon won the silver medal in weightlifting. He is Olympic vice-champion. Thanks to him, the French delegation won its fourth medal in the Tokyo Paralympic Games.

Which players will be part of the French group for the next three games of the 2022 World Cup qualifiers? You can follow with franceinfo sport the announcement of the Blues list to face Bosnia-Herzegovina, Ukraine and Finland.

13:35 : The United Arab Emirates have helped 28,000 people flee Afghanistan since the Taliban took control of Kabul, a senior Emirati official told reporters in Abu Dhabi. Of these 28,000 people, some 12,000 were evacuated by the United Kingdom and 9,000 by the United States.

1:11 p.m. : Here are three contents not to be missed on franceinfo at the moment:

• The report by Valérie Crova in Qatar. There she met refugees who, for some, are fleeing for “the third time” their country. “Forty years of suffering”, laments a 79-year-old man. “The first time I left my country was when the Soviets invaded Afghanistan”, he recalls. To read and listen here.

Our educational article on the decline in the level of protection of vaccines over the months, according to a series of scientific studies published recently. Which vaccines are affected? What are the reasons for this decrease in the immune response? What are the possible solutions ? Answers here.

• Pierre-Louis Caron’s investigation on the program “Touche pas à mon poste” by Cyril Hanouna, become a political meeting. The flagship program of the C8 channel, which returns on Monday, gives more and more to the political debate, eight months before the presidential election. Read here.

12h51 : Hello @ Jimmy12. A priori, those who have signaled to be repatriated should not be left behind. This is in any case what said the Secretary of State for Tourism, Jean-Baptiste Lemoyne, on LCI yesterday. He clarified that there was still “a few dozen” French people there and that the French authorities were “in touch” with them. Jean-Baptiste Lemoyne assured that “all“ was made for “bring everyone home “.

12:41 : Concretely what are the scenarios for a French not yet repatriated from Afghanistan from the day after tomorrow? Do we have an idea of ​​the number of people involved?

• Matignon specifies that the vaccination campaign for a third dose of vaccine against Covid-19 will begin in nursing homes from “September 13”. Follow our direct.

• The introduction of the health pass at work, except for professions for which vaccination is compulsory, “is not relevant”, assured Jean Castex on RTL.

11:49 am : To make the spirit of the Enlightenment triumph in the face of obscurantism, #fraternity in the face of hatred. We are preparing, in conjunction with the services of the State, the diaspora, all the forces of civil society, to welcome those whose lives are threatened in #Afghanistan by the Taliban. https://t.co/vsDQW1KLi1

12:10 : The mayor and president of Montpellier Méditerranée Métropole Michaël Delafosse (PS) announces that he has reached an agreement with the prefecture of Hérault and the Ministry of Foreign Affairs for the reception of 50 Afghan refugees. These must arrive within 24 hours, advance France 3 Occitanie.

11:21 am : Like France, the Netherlands will end evacuation operations in Afghanistan a few days before the August 31 deadline. “The Netherlands were informed today by the United States that they have to leave and will probably organize the last flights later today.”, announced the Dutch Foreign and Defense Ministers in a letter to Parliament.

10h52 : For some Afghan refugees forced to flee Afghanistan since the return of the Taliban, this is the third time they have left their country behind. Some have found refuge in Qatar, which hosts several hundred Afghans.

10h53 : The last French evacuation plane will leave Kabul tomorrow evening, after which “we can no longer carry out evacuations from Kabul airport “, French Prime Minister Jean Castex announced on RTL.

09:47 : The British Secretary of State in charge of the Armed Forces James Heappey assured that the terrorist threat which pushed London to advise against during the night to its nationals to join the airport of Kabul was “very serious” and “imminent”.

09:27 : In Kabul, the fear of the Afghans is growing as the deadline for the American withdrawal approaches, August 31. Some fear they will not be able to leave the country, as this report by Clémence Pénard shows for franceinfo.

Australian diplomacy, for its part, warned against a “very high threat of terrorist attack”. London issued a similar alert, adding: “If you are in the airport area, leave it for a safe place and wait for further instructions. If you are able to leave Afghanistan safely by other means, do so immediately. “

09:26 : The United States, Australia and the United Kingdom have called on their nationals to move away from Kabul airport as soon as possible due to “terrorist threats”.

Westerners call for leaving Kabul airport due to “terrorist threats”. Follow our direct.

• Jean Castex announces that a vaccination campaign for a third dose of vaccine against Covid-19 will begin in nursing homes from “September 12-13”. Follow our direct.

• Are the police more than 70% vaccinated and teachers more than 80%, as the government claims?

08:34 : Hello @ Tithomme85 and thank you for your words. That’s a very good question and I don’t have a categorical answer for you. She was born to an Afghan mother, on an American plane that landed in Germany. General Tod Wolters, commander of American forces in Europe, expressed the wish to see her become American: “As you can imagine, being a US Air Force pilot myself, my dream is to see this little girl called Reach grow up as an American citizen and fly fighter jets in our Air Force.”, did he declare.

twenty five past eight : Hello FI and thank you for your work. Do you know what will be the nationality of the little Afghan girl born in an American military plane?

08:14 : For the moment, “around 2,500” people, Afghan or French refugees, have been welcomed in France since the start of the evacuations from the country, said Jean Castex on RTL.

07:12 : We start the press review with Release who title “The trap” to characterize the situation in Afghanistan where, “A few days before the American withdrawal, the repatriations of Westerners and Afghans are multiplying in panic”. 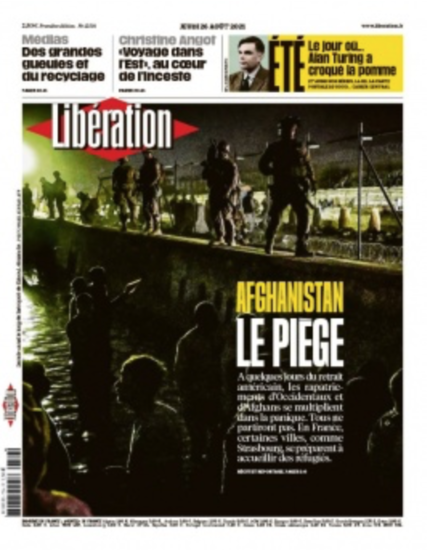 07:13 : A little Afghan girl born on board an American military plane which evacuated her parents to the base of Ramstein (Germany) was named Reach, of the code name of the device, revealed the commander of US forces in Europe, General Tod Wolters.

The United States, Australia and the United Kingdom called on their nationals to move away from Kabul airport as soon as possible due to threats “terrorists”.

Taliban pledged to let Americans and Afghans go “at risk” after August 31, after the departure of US forces, said US Foreign Minister Antony Blinken today.

• The Minister of Education Jean-Michel Blanquer presents the start of the year 2021-2022, once again upset by the Covid-19, hoping to reconcile two objectives: close as few classes as possible and preserve the education of students .

• Faced with the health situation “serious”back to school is pushed back to September 13 in Guadeloupe, Martinique, Saint-Martin, Saint-Barthélemy and in areas classified as red in Guyana.

The match had started well. But Monaco was eliminated this evening by the Ukrainians of Shakhtar Donetsk (2-2) in the return play-offs of the Champions League after their 1-0 defeat in the first leg.

Read also
Related topics
Previous articleDomenico Ciampà bursts out against the lack of support
Next articleLive: explosion in Afghanistan near Kabul airport

Presidential elections in Colombia: what is the difference between a blank vote, null vote and abstention?

Re-election, Uribe and scandals: what do Petro, Fico and Hernández say? 4:35 Watch here the result of the...

Law enforcement is accused of taking too long to...
World

Jacques Bouthier, indicted for "rape of minors" and "trafficking...