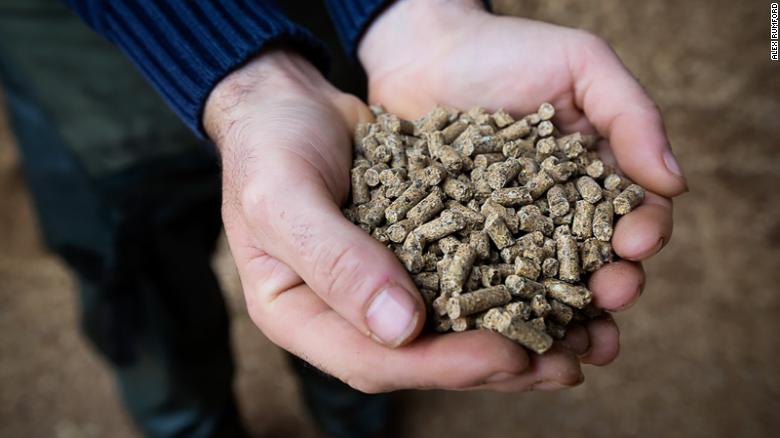 London (CNN Business) – More than 1.4 billion cows in the world, livestock is responsible for almost 10% of all greenhouse gases generated by human activity.Much of it comes from methane in cows’ digestive gases, but a new food supplement could reduce those emissions by 30% on average, according to its creators. If all the cows in the world consumed this supplement, the reduction in emissions could be equivalent to removing more than 300 million cars from the roads of Europe.

The supplement, developed by the Swiss-British company Mootral, made from garlic and citrus extracts, is mixed with regular livestock feed and reduces methane emissions by the equivalent of one ton of carbon dioxide per cow per year.

The supplement comes in the form of granules that are mixed with the cows’ feed twice a day.

The company converts these savings into carbon credits, approved by Verra, a global voluntary carbon offset program, which are sold to companies that want to offset their emissions.

The proceeds from the sale of carbon credits are returned to ranchers, subsidizing the initial cost of livestock feed and encouraging them to buy more, Mootral CEO Thomas Hafner told CNN Business.

“Carbon credits are an important stimulus tool to drive the adoption of climate-friendly technologies,” says Hafner.

Brades Farm in Lancashire in the North West of England is the first commercial farm to adopt Mootral’s carbon credit program. His herd of 440 dairy cows receives the supplement twice a day.

Feed additives help prevent microbes in the cow’s stomach from producing methane, which is often produced as a by-product of the digestion of fibrous plant material such as grass.

Brades Farm presents itself as a climate-friendly company, with the slogan “less cow gas” on its boxes.

“It’s hard to make a living from ranching, there are always bills to pay,” says Joe Towers, who runs the farm with his brother Ed. “Carbon credits are a real opportunity […] to offset this expense for the ranchers, “he says.

The food supplement has an extra commercial benefit for the farm. By marketing their cows as low methane, the brothers have found a niche selling premium milk to London coffee shops.

Mootral’s so-called “CowCredits” aren’t cheap. They entered the market in April at a cost of about US $ 80 each, and each credit offsets a ton of CO2.

Forest offset systems, by comparison, cost an average of US $ 4 per tonne of CO2, according to the research company Ecosystem Marketplace. But Hafner believes there is demand for credits that offer “immediate and verified reduction” in emissions, rather than those that promise future savings that may not occur.

With growing pressure from companies to reduce their climate impact, the demand for offsets is growing.

Ecosystem Marketplace estimates that the global market for voluntary offsets was worth US $ 320 million, in 2019, more than double its value, two years earlier. The Taskforce on Scaling Voluntary Carbon Markets, a private sector initiative, estimates that it could grow to more than $ 50 billion by 2030.

So far, Mootral has generated over 300 CowCredits. It wants to create 10,000 in the next year, and is seeking an investment of US $ 2.5 million to expand its operations.

But there are challenges. The amount of methane reduced by the feed supplement depends on the breed and environment of the cow. So far, Mootral has only done extensive testing on the two breeds from Brades’ farm, but Hafner says he plans to conduct more studies in different parts of the world.

The different feeding routines of cattle and dairy cows pose another challenge.

Dairy cows usually come home every day to be milked, so it is easier to put them on a strict diet.

Still, Hafner is confident that Mootral will find a solution, and the company will soon begin testing on a Texas ranch with 12,000 cattle.

Liam Sinclair, Professor of Animal Sciences at Harper Adams University in the UK, says it will be necessary to monitor the effects of the Mootral product over time, as there is a risk that the change in diet will affect digestion of the cow, which could reduce its growth rate or milk production.

“It is also very important that the product is available and profitable in developing countries so that there is a significant reduction in methane production,” he adds.