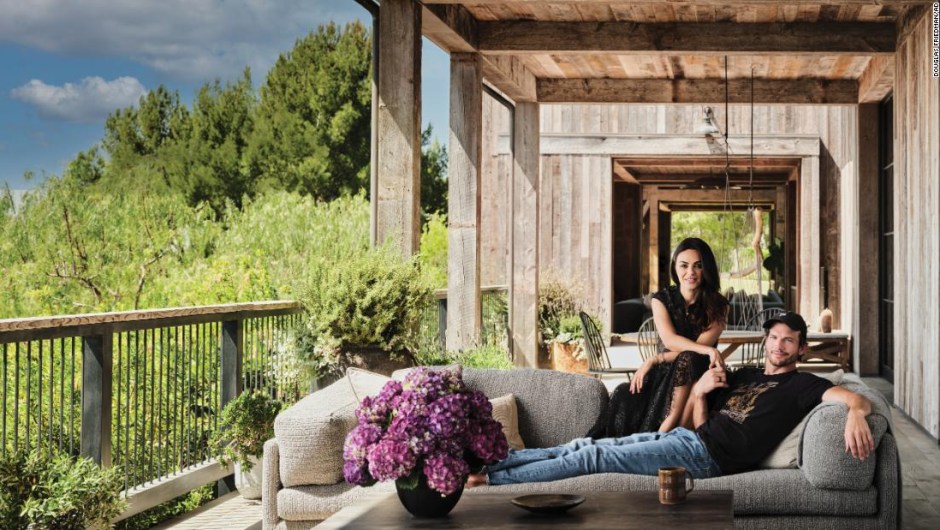 (CNN) – A 10-foot-tall crystal chandelier and a set of custom-made silver chairs wouldn’t exactly scream “contemporary farmhouse.” But Mila Kunis and Ashton Kutcher somehow made them match in their opulent yet rustic hilltop home in Los Angeles.

When inviting the magazine Architectural Digest On their 2.4-hectare estate, the couple delved into the design process behind what Kutcher describes as a “home, not a property.”

“We wanted the house to look like an old barn, something that had been here for decades, then turned into a house,” Kutcher is quoted in the magazine’s June cover story.

But there was a major barrier to their dream of creating an authentic barn-style home: They weren’t restoring an old farm, they were building one from scratch.

“Building a house from scratch is no small thing,” the article quotes Kunis. “This would be glory or failure.”

Tasked with making the property feel both homey and “modern and relevant,” as Kutcher put it, the architecture firm Backen & Gillam Architects was hired to bring his vision to life.

The resulting design, which took five years to build, comprises a main house, a guest barn, a swimming pool and a barbecue pavilion. The property features beams made from reclaimed wood, tall glass-paneled sliding doors, and concrete walls designed to mimic the texture of the wood grain.

Architect Howard Backen said the couple were involved in even the smallest details. “We talked about everything from the size of the beams to the details of the cross reinforcement and the joints of the wood planks and concrete,” Backen told the magazine. “This is not the type of conversation we have with all clients.”

Backen said his celebrity clients were particularly interested in sustainability. Hidden solar panels on the property’s porch roof produce “significantly more” energy than the home uses, according to Architectural Digest.

When it came to the interiors of the house, Kutcher and Kunis enlisted the help of Vicky Charles, who was about to leave a position as head of design at the exclusive Soho House membership club.

Kunis said the couple were “obsessed” with Charles’s work, which includes putting up the Soho Farmhouse, a British estate that is reportedly loved by celebrities from Victoria and David Beckham to Prince Harry and Meghan Markle.

“We loved the way she mixed fabrics, patterns, textures … really all of her aesthetics,” Kunis is quoted as saying.

Charles said that throughout their discussions, the actors prioritized creating a comfortable home for their family, which includes their two young children, Wyatt and Dimitri.

“We spent months looking for materials and colors to find the right visual language,” said Charles, who also spoke to the magazine. “Our conversations were not just about the terrain and architecture, but also about the future of his family.”

“Over time, the design moved away from the traditional farmhouse aesthetic to something more contemporary,” said Charles.

A giant chandelier and a set of silver chairs, commissioned by Kutcher on a trip to India, provided an opportunity for Charles to do something fun with the interiors. The chairs went to the master bathroom, while the chandelier was moved to the guest barn.

“We thought it would be fun to have this incredibly opulent (chandelier) hanging in a stable,” explained Charles.