From the beginnings of 1948 to the height of 2012, how the Paralympic Games found their place alongside the Olympic Games – franceinfo

“We want recognition. Don’t look at some athletes as ‘animals’.” This cry from the heart was launched in The Obs by Arnaud Assoumani, long jump athlete and five-time Paralympic medalist, on August 30, 2012, the day after the opening ceremony of the London Games.

At the time, the Paralympics received very little media attention and the performance of the athletes was not well recognized on the sporting aspect. But London has changed that. Never have the Paralympic Games brought together so many people. If the 2012 edition gave rise to a unique communion between athletes and spectators, this outcome is the fruit of decades of a relentless fight to have the performances of disabled athletes recognized in the same way as those of able-bodied.

To find the origin of the Paralympic Games, we have to go back to the end of the Second World War. Sensitive to the fates of veterans injured in the spinal cord, the British government called on a German neurologist, Dr. Ludwig Guttmann. “He was convinced of the benefits of sport in the rehabilitation process of spinal cord injuries”, says Jean Minier, chef de mission of the French delegation to the Tokyo Paralympic Games. Thanks to his research carried out at the Stoke Mandeville hospital, located in the suburbs of London, Guttmann quickly realizes that the practice of sport strengthens the immune system of his paralyzed patients and gives them a better life expectancy. 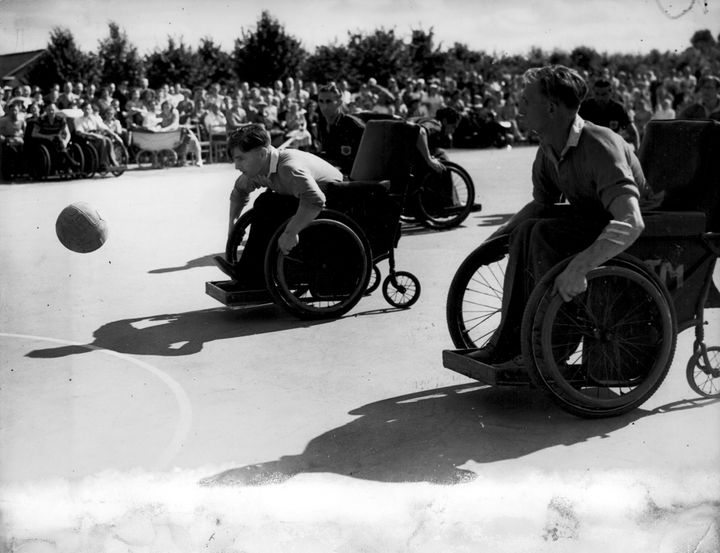 In 1948, when London organized the Olympic Games, the first since 1936, Guttmann took the opportunity to organize a sports competition in his hospital. Sixteen wheelchair veterans compete in archery and netball, a form of basketball. The Paralympic movement has just been born. “This event was subsequently considered to be the beginnings of the Paralympics”, adds Jean Minier.

The machine is started. From 1952, the first international Stoke Mandeville Games were organized and brought together European veterans. These games become an annual event and gain in importance and credibility with the International Olympic Committee (IOC). After long years of fighting, Ludwig Guttmann finally obtained the recognition he hoped for. In parallel with the Olympic Games in Rome in 1960, the IOC accepts that 400 disabled athletes participate in a sports competition dedicated to them under the name of the “IXth International Games of Stoke Mandeville”. 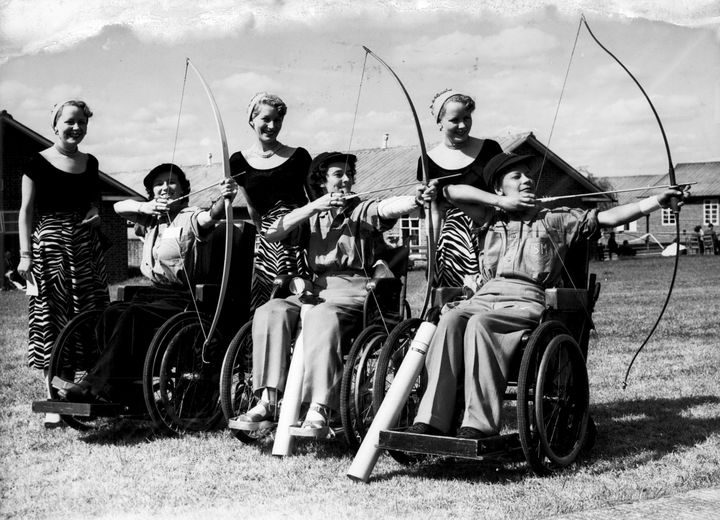 “It was only after the fact that they were called the Paralympic Games in Rome”, underlines Jean Minier. Having entered the big leagues, the organizers must tackle the creation of handicap categories. “At the beginning, it was very informal. But from Rome, they were obliged to establish categories to have more or less equal competitions. Even today, they are constantly being revised,” says Jean-Loup Chappelet, professor emeritus at the University of Lausanne and specialist in Olympic issues.

These first Paralympic Games in history are a success, with 400 athletes from 23 countries making the trip. Eight disciplines are in the spotlight, such as athletics, wheelchair basketball, swimming, archery, table tennis and wheelchair fencing. “Initially, the Games were only reserved for people in wheelchairs. It was not until the 1972 Games that people with other disabilities expressed their desire to be included in this event”, notes Jean Minier. Thus, from the 1976 Games, visually impaired athletes and amputees joined the Paralympics. 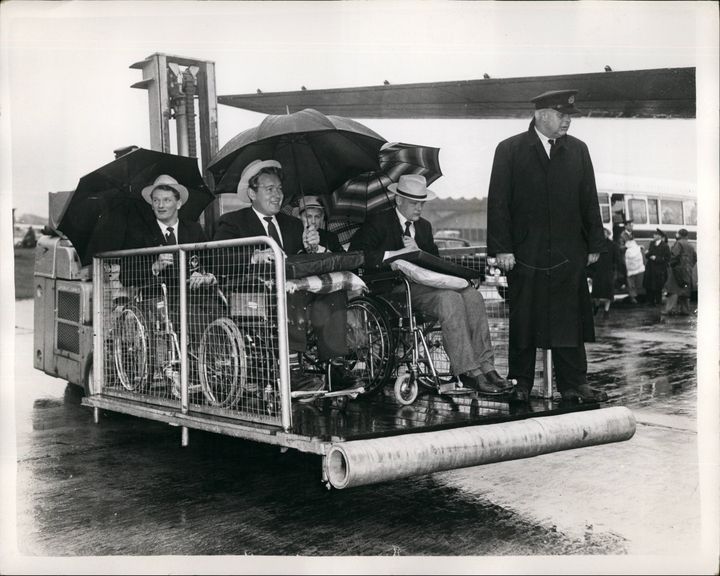 In 2012, the links between the two events strengthened to the point that the same committee organized both the Olympic and Paralympic Games. A first. And while only 400 athletes took part in the Games in Rome in 1960, there were more than 4,300 in Rio. A record.

Another record in Rio, that of the media strike force. Never have the Paralympics been so publicized. In France, according to figures from Médiamétrie, if 40 million viewers followed the Olympic Games for nearly 700 hours of airtime, they were 13.6 million to watch at least a quarter of an hour of the Paralympic Games for 100 hours direct.

If all this has been made possible, it is notably thanks to the turning point of the Paralympic Games in London. Full stadiums, incredible performances and unprecedented sportsmanship. “The Paralympic Games had a turning point in the early 2000s but the climax was in London. They sold almost all of the tickets [plus de 2,7 millions de billets, 900 000 de plus qu’à Pékin]. It had never happened “, remembers the specialist in Olympic issues, Jean-Loup Chappelet.

Above all, “the organizers had prepared the English spectators well for the event. They knew the sports, the rules, the athletes”, analysis Benoît Hétet, communications director of the French Handisport Federation and former communications manager for the Paralympic teams between 2004 and 2014. “The success of the London Games decided the broadcasters to be more present, he continues. Moreover, from the Sochi Games in 2014, France Télévisions covered the entire event for the first time. This dynamic instilled by the public service then led to a craze in other media. “

If London’s success is undeniable, it should nevertheless be qualified. “I don’t know if we can say that London was the turning point, slice table tennis player Stéphane Molliens, Paralympic champion in Rio, who will participate in his fifth and last Games in Tokyo. I knew Athens in 2004 where there was no one there. In Beijing, on the other hand, the stadiums were constantly filled. But between the time difference and the fact that China is a different country from ours, we have seen this craze less in Europe. What played out in London was that it was a neighboring country that looks like ours. The message was more audible “, he recalls. 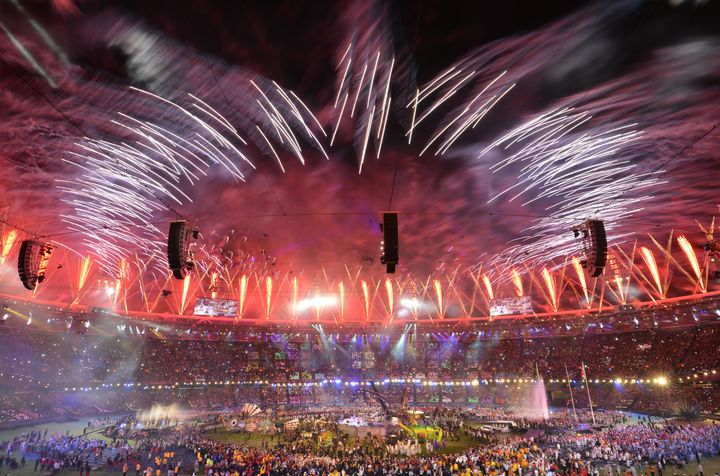 Fireworks light up the sky above the Olympic Stadium during the closing ceremony of the London 2012 Paralympic Games on September 9. (BEN STANSALL / AFP)

Whether it is Beijing, London or Rio, the last editions have all played a role in the media coverage and the way of perceiving the event. “Before the Athens Games, we spoke of the Olympics but very rarely of the ‘para’. Today, we speak of both. We are much more associated, and we also popularize the word Paralympic. At the time, a lot didn’t even know the term used. I have heard the terms ‘para-olympic’, ‘handilympic’ many times. says table tennis player Stéphane Molliens. Above all, public perception and recognition of Paralympic athletes have evolved considerably.

“Today, we are seen more as athletes who defend the colors of France, and more as people who have a disability and who achieve something beautiful and courageous.”

“We were seen as that for a long time. Now we are really seen as athletes”, he rejoices. The London Games, with unprecedented media coverage, also brought the athletes into another sporting dimension. “We also understood, we athletes, the requirement necessary to remain at the top level. Because when I took part in my first games in Athens, I had the feeling that we were certainly going to a benchmark competition, but which had no event dimension. While today, we are in a truly beautiful event “, stresses Stéphane Molliens.

If the Paralympic athletes have demonstrated that they are high-level athletes in their own right, their media coverage between the Olympics is still insufficient to retain audiences. This will also be one of the main challenges of the Paris 2024 Olympic Games. After the announcement of the union of the French Olympic and Paralympic teams to form one and the same team in order to offer the same visibility, the objective is now to create a link between disabled athletes and the public. “We must publicize and follow the athletes outside the Games. The French do not know enough their Paralympic athletes, so I do not see how they would encourage them in Paris 2024”, asks Jean Minier.

The work is in progress, answers for his part Benoit Hétet, of the FFH. “We are working on education in order to make the Paralympic categories accessible to future spectators. In Paris 2024, there is the will to play the same match, the Olympic Games in the first half, the Paralympics in the second.”

Previous articleChicory DOES NOT HAVE JOY: THIS WILL INCREASE THE CREDIBILITY OF VACCINATION! – Pluska.sk
Next articleMeghan Markl is fleeing to New York! What is it about? Is he getting divorced? – Pluska.sk

8:03 p.m .: Un Certain Regard, Directors' Fortnight, Critics' Week... The films in these "parallel" sections are also being...

Another blown candle for Sylvie Tellier. This Saturday, May 28, 2022, the director of the Miss France Committee...

Follow the winners of the 75th Cannes Film Festival live

Another blown candle for Sylvie Tellier. This Saturday,...
World