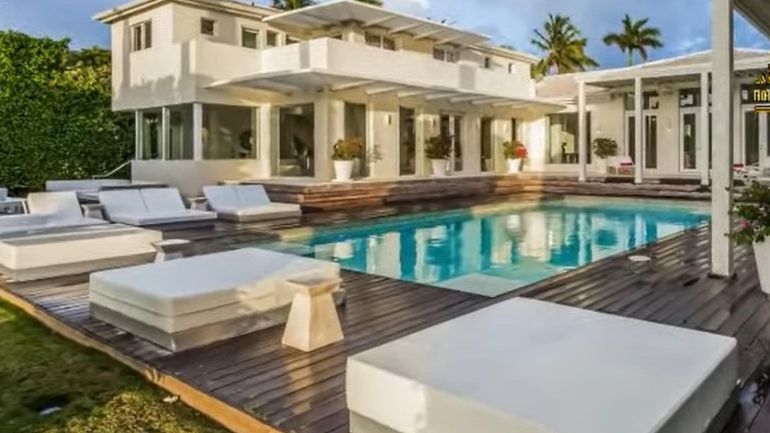 “The press assumed that Shakira was going to come and live here, in the super mansion she owns in South Beach. As in her house in Barcelona, ​​in Esplugues de Llobregat, the singer has a recording studio there, so the change for her would not be so big, “explained the journalist Álex Rodríguez recently from the house of Shakira in Miami. “She loves the United States and has always wanted to live in Miami, where she is one of the most beloved people and is considered a superstar,” he added. Shakira and her children’s new family home is one of the most luxurious star homes in the area, which the singer bought in 2001 and has tried to sell (for $12 million in 2018) or rent ($45,000 a month in 2003) without success in recent years: Located on North Bay Road Drive, the house has 900 square meters, with six bedrooms and seven bathrooms, gym, outdoor pool, game room, spa area and a private dock that overlooks Biscayne Bay. Its price is 16 million dollars and its neighbors are stars like Jennifer Lopez or Ricky Martin. An ideal place to “take refuge” and start a new life. She lived in this house with her previous partner before meeting Piqué at the 2010 World Cup in South Africa, the Argentine lawyer Antonio de la Rúa. Miami is not a strange city for the children of Shakira and Piqué, who “also have many friends and their cousins ​​here”, since the family has spent long periods in that house. which already generated the first frictions in the couple”, they commented then on the Ana Rosa program. Now that there is a separation agreement, Shakira will be able to settle permanently in Miami with her children from January or February of next year. Shakira has her family there and friends like Gloria Estefan and her husband Isabel Mebarak Ripol, Shakira’s real name, would like to take advantage now that she has separated from Gerard Piqué, after 12 years of relationship, to establish her habitual residence there . “Your brothers [Tonino y Lucy Mebarak] They live in Miami, and their parents also have a house there, they all live nearby”, explained Álex Rodríguez. It was said that “the singer’s brother, Tonino, was already preparing the house, which is no longer for sale, for Shakira’s long-awaited return. In addition, apart from the family environment, the singer has “godparents of exception, Gloria and Emilio Estefan”. They were the ones who introduced Shakira to the musical world of the United States, when she was already well known in Spain and Latin America. In addition, “Miami is the capital of Latin music, and the ideal place for Shakira at this time when she wants to focus on promoting her professional career,” added the journalist. In addition to launching her new song, Monotonía, supposedly dedicated to her breakup with Piqué, the singer also has, for example, NBC’s Dancing with Myself dance contest, where she serves as a jury. The Barcelona house she shared until now with Piqué Shakira will thus leave the family home that she shared until now with Piqué in Ciutat Diagonal de Esplugues del Llobregat. An exclusive urbanization in which the singer’s parents -William Mebarak and Nidia Ripoll-, as well as those of the footballer -Joan Piqué and Montserrat Bernabeu- also lived when they were in Spain. The three houses are on the same street, which had fostered a magnificent relationship between the two families over all these years.