The skirmishes at Kabul Airport claimed one victim. Biden: It can’t be without pain and loss – PRAVDA.sk

Kabul Airport is an anthill for people trying to get out of Afghanistan as soon as possible. The United States managed to evacuate 11,000 people over the weekend. Britain is set to evacuate 6,000 people this week. Other countries are also transporting not only their people, but also Afghans.


The US Marines and coalition forces from Norway are providing an evacuation checkpoint so that evacuees can safely reach Kabul Airport in Afghanistan.

According to the Bundeswehr, at least three other Afghan soldiers were injured in the skirmishes at Kabul airport. Members of the German armed forces have remained uninjured, but further details were not immediately known. 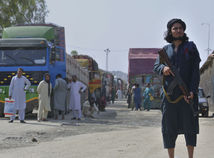 US President Joe Biden still hopes that the evacuation of people from Afghanistan will be completed by the end of August. However, he acknowledged that her deadline could be extended if necessary.

According to AFP, although more and more people have been evacuated from Kabul Airport despite the volatile situation and the enormous logistical problems, Biden said, in his own words, that this task is being completed by August 31, the date agreed with the Taliban.

“I hope we do not have to extend this deadline,” Biden said at a White House press briefing on Sunday. “We’ll see what we can do,” Biden said to reporters about his response to leaders in other countries calling for more time to evacuate.

The US president added that the US managed to evacuate 11,000 people from Afghanistan this weekend. Biden also said that a total of 33,000 people had been evacuated from Afghanistan since July. In his own words, he sees dramatic scenes from Kabul Airport, where desperate people are trying to get on evacuation planes in an attempt to escape from Taliban militants, but stressed that the situation must be accepted. “There’s no way to evacuate so many people without the pain and loss and heartbreaking shots you see,” he said.

There are also concerns about the Islamic State

Biden also warned against extremists from the Islamic State (IS), who he said posed a constant threat. “We know that terrorists can try to take advantage of the current situation. That is why it is still a dangerous operation, “he added.

According to Biden, the longer US troops are in Kabul, the greater the risk that IS will try to attack civilians and American citizens around Hamid Karzai International Airport.

The US Embassy in Afghanistan has already issued a warning about unspecified “potential security threats” and advised Americans to avoid the airport unless instructed otherwise by a US government official. According to the AP, this is partly due to fears of possible attacks by IS fighters.

In an effort to speed up the evacuation from Afghanistan, Washington on Sunday asked several major US airlines for help, according to AFP. The people who were airlifted from Kabul to US bases in the Persian Gulf and to Europe are to help transport them back to the United States. Together, these airlines are to provide the Pentagon with 18 aircraft.

The British are proposing sanctions

Britain plans to evacuate up to 6,000 more people from Afghanistan this week, The Times reported. Other countries are continuing to transport their citizens and many locals from Afghanistan, which was dominated by the extremist Islamist movement Taliban a week ago. Germany, for example, transported 213 people from Kabul to Tashkent, Uzbekistan, on Monday night, the DPA reported.

Britain has taken about 5,700 people from Afghanistan since the weekend last weekend, the Ministry of Defense said on Sunday. Germany has so far evacuated about 2,500 people, of whom about 1,850 were Afghans, the foreign ministry said.

Due to the situation in Afghanistan, G7 leaders are due to discuss at an online meeting on Tuesday. The talks are being taken at the initiative of Britain, which, according to Reuters sources, plans to propose consideration of sanctions against the Taliban. The Foreign Secretary Dominic Raab spoke about the possibility of sanctions last week. However, according to some experts, they are unlikely to be implemented immediately, Reuters reported.

On August 15, militants of the fundamentalist Taliban movement easily occupied the Afghan capital, Kabul, and overthrew a government that had been militarily backed by the United States and the North Atlantic Alliance for two decades. Thousands of people are still trying to get out of Kabul. Many Western states have closed their embassies there and are evacuating their citizens and local collaborators.

Previous articleSileri: “In mid-September 80% vaccinated, if we do not get there we will evaluate obligation”
Next articleBritain wants to demand sanctions on Taliban at G7 summit on Afghanistan – Aktuality.sk

Rejuvenation to come on Saturday on the Suzanne-Lenglen court....
World