With its range of up to 85 km and its removable battery, the Rider 3000W is suitable for most urban uses. We tested it, here is our verdict. 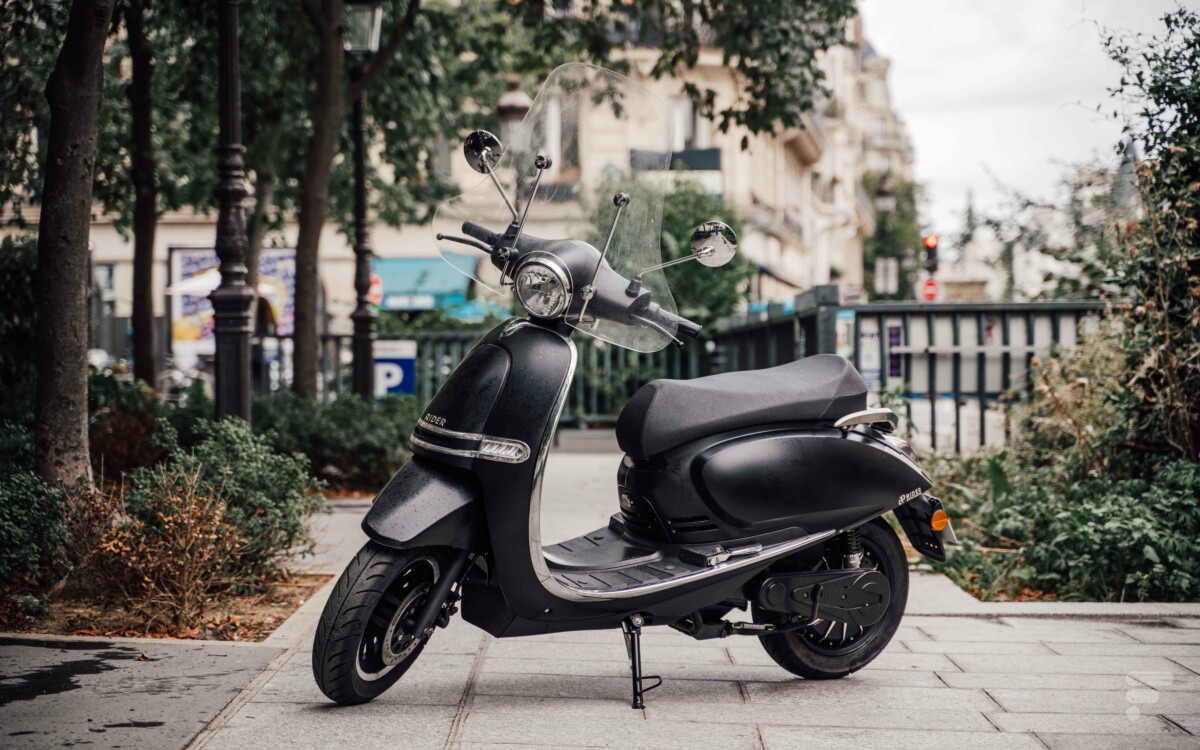 When it comes to the subject of electric scooters, many brands are still little known. This is particularly the case of Rider, which is in fact a brand created in 2018 by Go2wheels, a chain of shops specializing in the sale of electric scooters. Indeed, their expertise and their proximity to customers as a point of sale have enabled them to develop a scooter according to their needs. Electric mobility being a subject that is growing in importance, we will see if the Rider 3000W meets the requirements of customers looking for urban mobility.

The Rider 3000W is a relatively basic model, offering as its name suggests a 3000W engine, equivalent to 50cc. Its main asset, in addition to its “retro” design, is its range of around 80 km on a single charge.

This test was carried out using a model loaned by Go2roues.

The appearance of the Rider 3000W does not leave you indifferent. The brand has indeed chosen to be inspired by the Vespa style, quite popular in France, even placing it at the top of the sales of the Go2roues store. The color palette allows you to assert your style even more, ranging from matte black or glossy black for followers of sobriety or turquoise and beige for lovers of retro design.

Unfortunately, despite a neat aesthetic, the finishes are in the low average. Indeed, some plastics of the fairing are of poor quality. For example, the glass protecting the computer screen appears prone to scratches and reflects the sun too much. As for the saddle seal, it tends to come off when you remove the battery.

The size of the scooter remains relatively compact, with dimensions of 190 x 68 x 113 cm. With only 84 kg on the scale, the Rider 3000W is relatively light, but be careful, you have to add the 18 kg of battery to obtain the weight in circulation, slightly exceeding 100 kg. The dimensions and weight make the scooter comfortable, especially if you are neither too tall nor too heavy.

The seat is low, like many urban scooters, and is pleasant on a flat surface. Things get complicated as soon as you drive on cobblestones or speed bumps, not to mention potholes, which should be avoided if you care about your back.

Things get tough when you have to carry a passenger. Indeed, comfort then becomes rudimentary: it is impossible to keep the arms outstretched for the driver. Both the pilot and the passenger are improperly seated. Although retractable footrests are included as standard, the passenger’s feet rub against the driver’s legs, which is far from pleasant for the driver.

To put it simply, the Rider 3000W can occasionally carry a passenger, but it is clearly not made to be systematically two above.

Once seated, the levers are well positioned and the brakes fall easily to hand. The horn and the indicators are accessible and the possibility of making a flash of headlights (pass mode) is appreciable. A dedicated reverse button is also present on the left, but it falls too easily under the thumb and I found myself starting in reverse a few times, although I did get used to it eventually.

On the right, we find the warnings, a circuit breaker and a start button, like on a thermal scooter. Finally, a switch allows you to toggle between “Low” and “High” modes, even if I have hardly used it – we’ll see why a little below.

The screen is too simplistic and poorly finished: It is barely readable in direct sunlight and only indicates the bare minimum, namely speed, mode (1 for Low and 2 for High), odometer and the remaining battery level. This one is also rather poorly thought out, because the bars are discharged from left to right, and not from right to left like most interfaces.

Also, don’t expect to find the time or temperature on this screen, this information is simply not available. Finally, the backlight of the screen is poorly thought out, since it tends to illuminate the low battery indicators and those of the full headlights, suggesting that they are on when they are not.

Finally, let’s finish with the storage. The space under the saddle is very disappointing, since my standard size jet helmet did not fit there – I do have a small head. You will therefore have to either keep it on your person, or opt for a demi-jet or bowl helmet. Rider makes up for it a bit thanks to the lockable glove box which is quite spacious and offers a USB-A socket, allowing for charging their phone on the ride.

Unfortunately, there is no cable gland allowing you to use your phone while charging using a holder. The hook fitted as standard also compensates for this lack of space in order to carry a bag between the legs without too much hassle.

The Rider 3000W offers a keyless start, allowing it to be turned on and off using the remote control. Although this mode is practical, it does not allow you to open the saddle, which will require you to insert the key as on a classic scooter. Likewise, starting is not hands-free, and you will still have to take the remote control out of your pocket to turn on the machine.

The scooter offers two power modes: Low mode limits the speed to 30 km / h and saves the battery. But it remains impractical, even in Paris. I thus remained in the High mode during almost all of the test, which allows to benefit from all the power of the scooter and to cap at 45 km / h. No matter which mode you choose, the Rider 3000W remains extremely quiet, which is a real pleasure on the road. 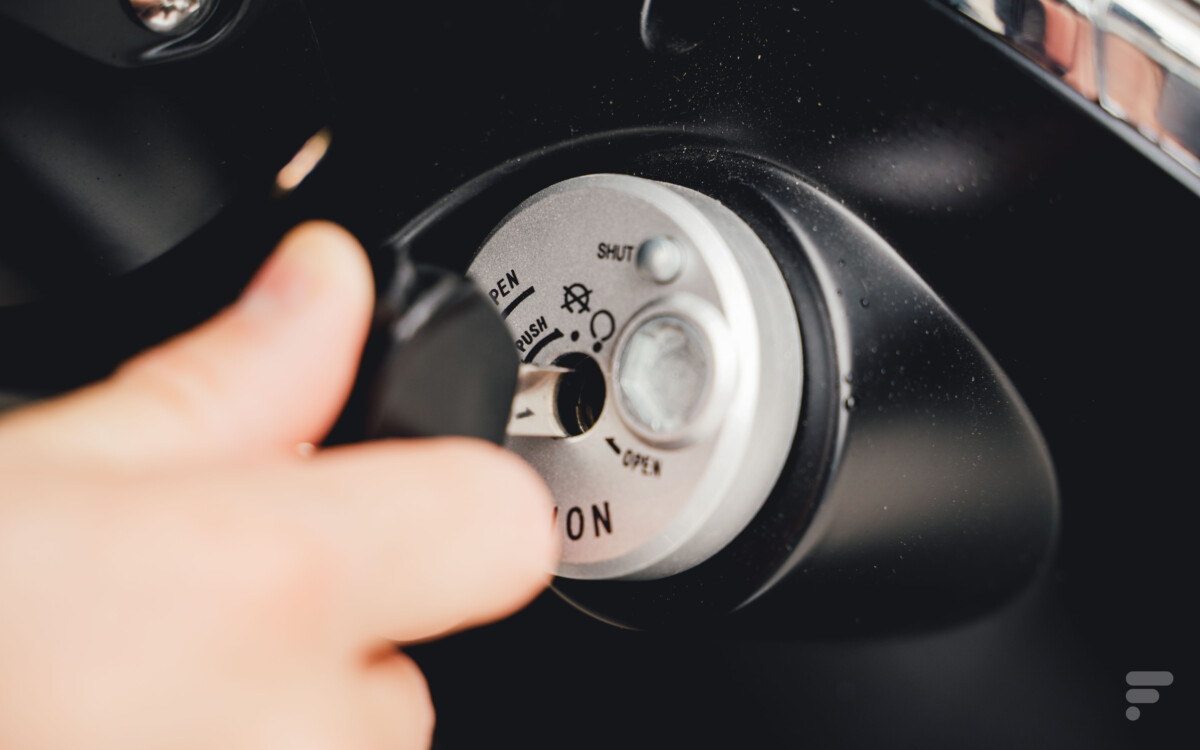 The 3000W motor offers respectable acceleration, especially for a 50cc equivalent. However, this sometimes gives an impression of inconsistency: the scooter can accelerate with quite uncomfortable jerks when slowing down, while it is quite pleasant to start after coming to a complete stop.

We tested the Rider 3000W in Paris in traffic jams and it is clear that it slips easily and is very quickly taken in hand. The design of the mirrors can sometimes pose a problem in interfile: it will therefore be necessary to be careful not to brush against the neighboring cars.

Its low position allows it to be stable and, even if our test in the middle of July did not allow us to test it on wet roads, the scooter does not skid and remains precise, even on the cobblestones of Paris. On the other hand, it will be necessary to remain vigilant in the turns and not to lean it too much. 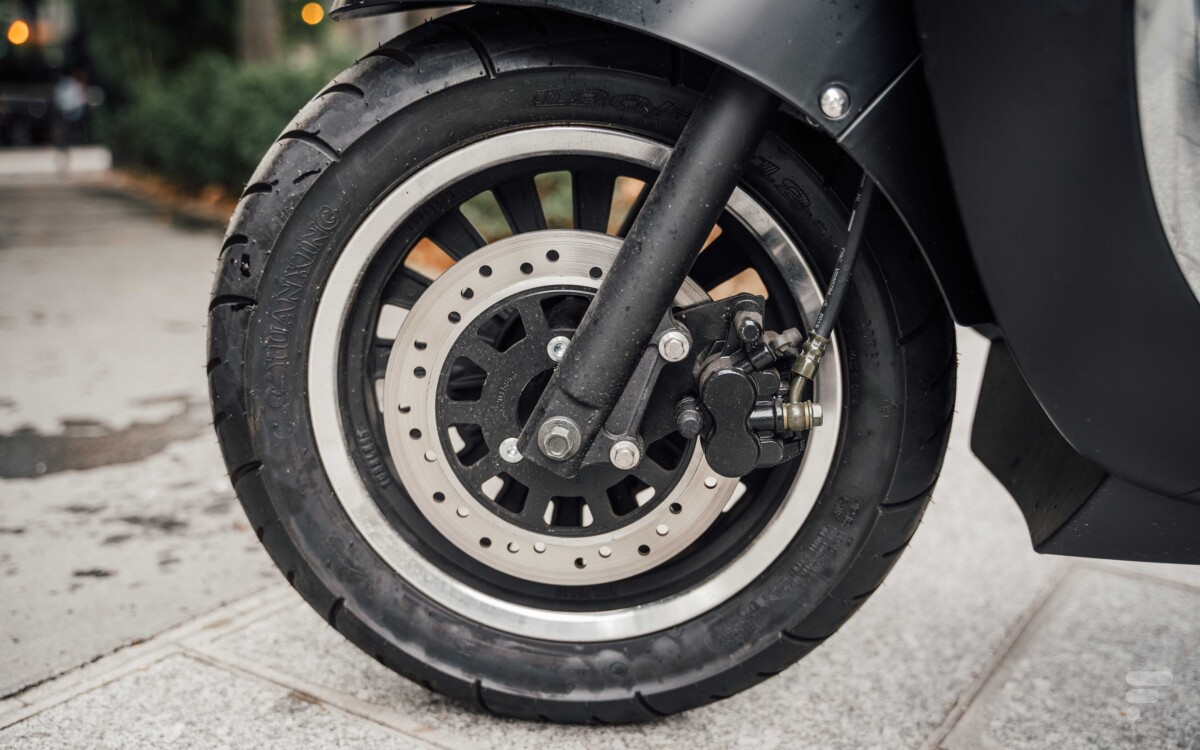 Braking is precise, efficient and produces the gentle sound of energy recovery. Even when braking late at a red light, it remains stable and brakes well. A safety system blocks acceleration when braking, which is restrictive in practice. For example, when the vehicle in front of you is not moving fast enough and you brake, the scooter will not accelerate immediately because you are still touching the brake lever.

The Rider 3000W is easy to park and the reverse gear is far from being a gadget, not because it is heavy, but because of the smallness of the Parisian places: I was able to get on the scooter and extract it while walking back when I would have had a hard time debutting it normally. It is appreciable and it saves time. 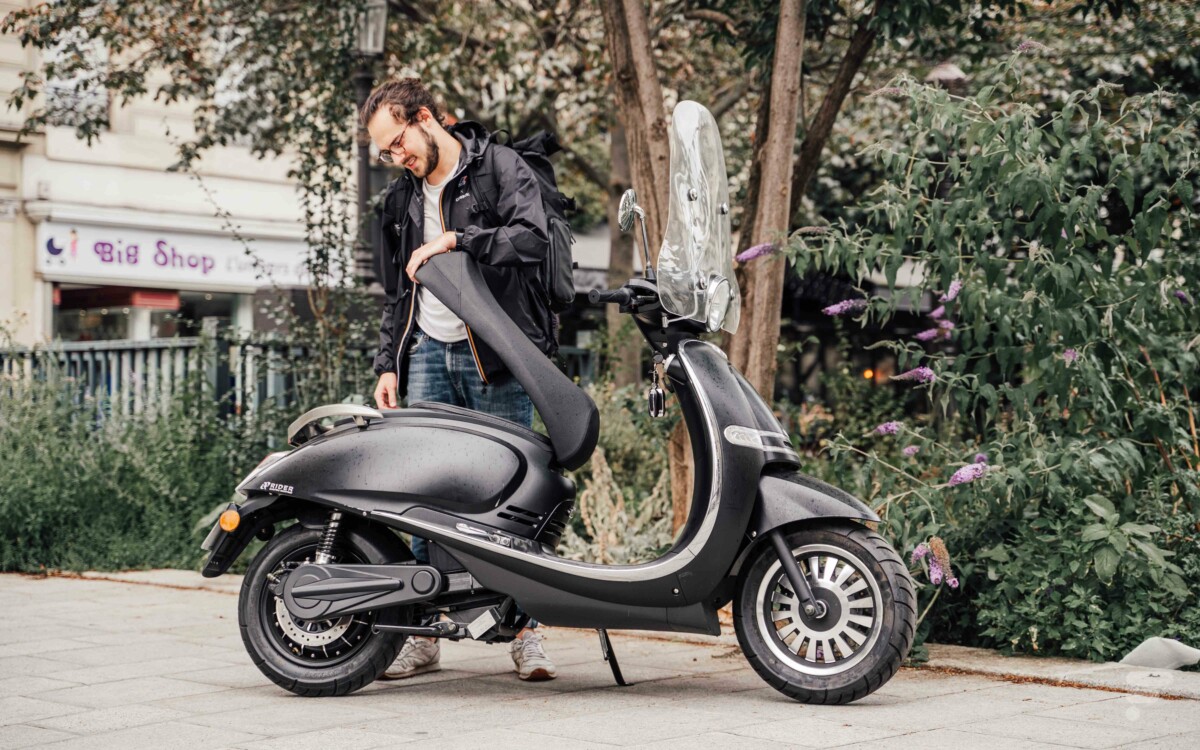 Let’s finish with the headlights: in built-up areas, they do the trick. They are not very powerful and will not be reassuring on a poorly lit or dark road, even in full headlights. It’s a shame, especially as they contrast with the LED turn signals which are clearly visible and add a modern aspect to the design.

Autonomy is the strong point of the Rider 3000 W. The manufacturer promises up to 85 km for featherweight in Eco mode. In reality, the High mode allows you to obtain around 50 km of autonomy, which is very close to the figures announced by the manufacturer. Thus, depending on your travels, a simple charge will allow you to use the scooter over three days, or even a week, which is particularly practical and respectable on such a product.

As for the battery charge, it is removable and can be recharged by plugging it into a conventional AC outlet using the supplied adapter, which will take around 5 hours. The latter is quite noisy while charging because of the integrated ventilation, so it is not the most advisable if you live in a studio. Another problem, the battery is particularly heavy with its 18 kg and must be carried at arm’s length, which is extremely restrictive if you do not have an elevator or place near your home.

In addition, although the Rider 3000W is equipped with an alarm, it does not work if the battery is removed for charging, since it does not have an alternative battery. Admittedly, without a battery the risk of theft is minimal, but it is all the same a pity since one can imagine that a theft or an act of vandalism are more likely to occur at night, when the battery is removed to be recharged. .

The scooter focuses on practicality, in particular by offering a respectable autonomy and ease of recharging. Unfortunately, the latter could have been more worked, for example by dividing the battery into two modules or by adding casters, like the Seat Mó eScooter 125.

Let’s finish with the financial aspect. Excluding bonuses, the Rider 300W costs 3,190 euros, which remains correct in view of its autonomy, but is around the price of a thermal 125 equivalent. Fortunately, this scooter benefits from many bonuses, to be offset by a discount of 720 euros everywhere in France, thus reducing its price to 2,470 euros.

The Rider 3000W therefore remains affordable, especially given the power of its engine and its range. For this price, the scooter is supplied to you naked, that is to say without accessories, top case, or others. However, the alarm is standard, as is the keyless start.

Rejuvenation to come on Saturday on the Suzanne-Lenglen court....