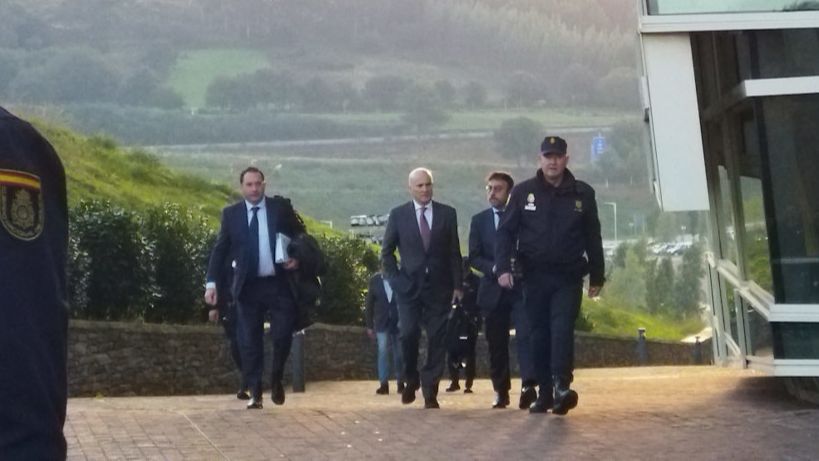 The former head of Security of Adif has arrived at the City of Culture of Santiago escorted by a couple of policemenThere is a significant reinforcement of security after he was beaten this Wednesday during his departureThe second day of the trial for the derailment of the Alvia train in Angrois will open with the statement of the train driver Tension, again, on the arrival of Andrés Cortabitarte to the trial that is being held in Santiago de Compostela (A Coruña) for the train that derailed in Angrois on July 24, 2013. The former director of Security of Adif , the only defendant in the process along with the train driver, has once again been rebuked upon arrival at the building where the hearing is being held. The National Police has reinforced security after this Wednesday, at the end of the first session of the trial, Cortabitarte was attacked by the father of a victim when he was going to his car. This Thursday the agents have made a police cordon, something that had not happened the day before, to prevent both journalists and victims from approaching him.Cortabitarte has entered the CINC building of the City of Culture after nine in the morning , accompanied by his lawyer, and with two agents of the National Police escorting him. Just when he crossed the doors to enter the trial, several victims have rebuked him with cries of “murderer”. This new day of trial, the second after the previous issues were settled this Wednesday, the driver’s statement is scheduled. Francisco José Garzón Amo will only respond to questions from his lawyer, Manuel Prieto. Both the train driver and the former head of Adif are accused of 80 crimes of homicide and 144 of injuries due to serious negligence, in addition to another of damages.