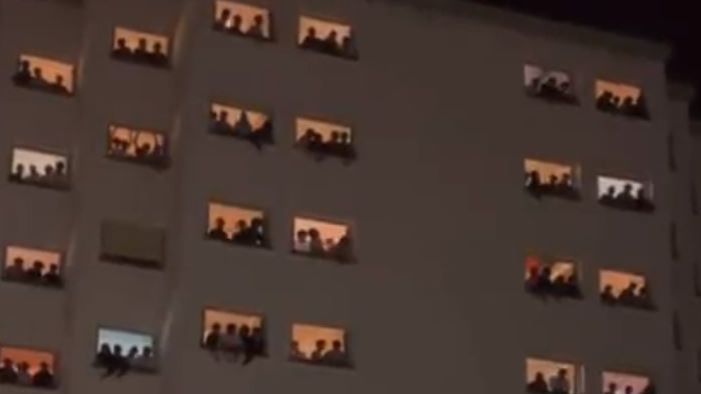 The Elías Ahúja university residence will force those involved to participate in awareness-raising courses on gender violence The image, recorded with a mobile phone, has gone viral on social networks where the intervention of the Ministry of Equality is requested In the video an orchestrated action is seen of more than a hundred young people referring to the girls of the female residence that is right in frontIt happened on Sunday night at the Elías Ahúja Male Residence Hall, in Madrid. This is how NIUS has been recognized by the director of the center. In fact, Manuel García Artiga and the night security guard tried to stop the “scene”, but it was “impossible”, he says. Of course, it will have consequences, he announces. He is already having them on social networks where users even appeal to the Ministry of Equality to take action on the matter in the face of the “macho and embarrassing” attitude of schoolboys. “They are predators and panic,” they write on Twitter. As seen in the video, in the midst of the silence and darkness of the night, one of the residents looks out the window of his room with the light on and begins to shout: “Bitches, come out of your burrows like rabbits , you are nymphomaniac whores, I promise you that you will all fuck on the roof, come on Ahúja!”. At that moment all the blinds are raised and dozens of university residents, more than 100 as can be seen in the image, lean out of the windows of the building, which is more than seven stories high, and cheer, shout and whistle with a thunderous noise. As explained by Manuel García Artiga himself, director of this religious center managed by the Augustinian fathers, the “inconceivable and intolerable” expressions were addressed to the young women of the Colegio Mayor Santa Mónica, a women’s center that is also located in Ciudad Universitaria in Madrid, right in front of Elías Ahúja. “Our mission in the residence hall is to help the boys to be good people and to become aware of the reality of the world”, says Maniel García Artiga. This attitude “does not respond to the college’s ideology and to what we want to convey to them.” The expulsion, in doubtFor all this, the person in charge of the center apologizes to the young women of Santa Mónica, regretting “deeply” what happened and, he assures, they have gathered the entire Elías Ahúja Residence Hall to make it clear that “this is not a hotel , we are here to educate them, what they have done is not correct and measures will be taken so that they are clear about the situation”. Among them, as detailed by Manuel García Artiga to NIUS and the center has published on his Instagram account: They will apply the Internal Regime Regulations to the students involved. “We will have to listen to the kids and then decide on a possible expulsion.” What you have to do is “help them mature and enter the adult world and this is a way of telling them: be careful, there are social norms and you have to comply with them.” They will write a public letter of apology. They will force those who have been part of the video to participate in awareness-raising courses on gender violence, asking for advice and professional advice so that young people have tools with which to relate well to women. The culprits will have to volunteer to help the most disadvantaged. A “great” relationship with the Santa Monica schoolgirls The director of the center says he does not understand why this has happened. “The relationship with the Colegio Mayor Santa Mónica is very good, we are even working together on a play to perform at Easter,” he explains. Although, as reported by numerous users on social networks, it is not the first time that something similar has happened in this center attached to the Complutense University of Madrid. Sources from the public university, the largest in Madrid, assure NIUS that being an “attached” center, the “last and only” responsibility lies with the Elías Ahúja Residence Hall. Reactions on TwitterTwitterThis residence, exclusively for males, where the former president of the PP, Pablo Casado, also lived (his wife lived in Santa Mónica) charges 1,065 euros per month for a single room and, as published by the Council of Schools University Majors of Spain on its website, is not a “mere residence”, but rather “offers a project aimed at promoting the comprehensive training of the person through coexistence and the activities that take place in it. These two objectives , together with study, constitute the three fundamental pillars of the Colegio Mayor Elías Ahúja: objectives that are pursued through an environment that favors study, and a cultural and sports offer that seeks the direct intervention of the students”.