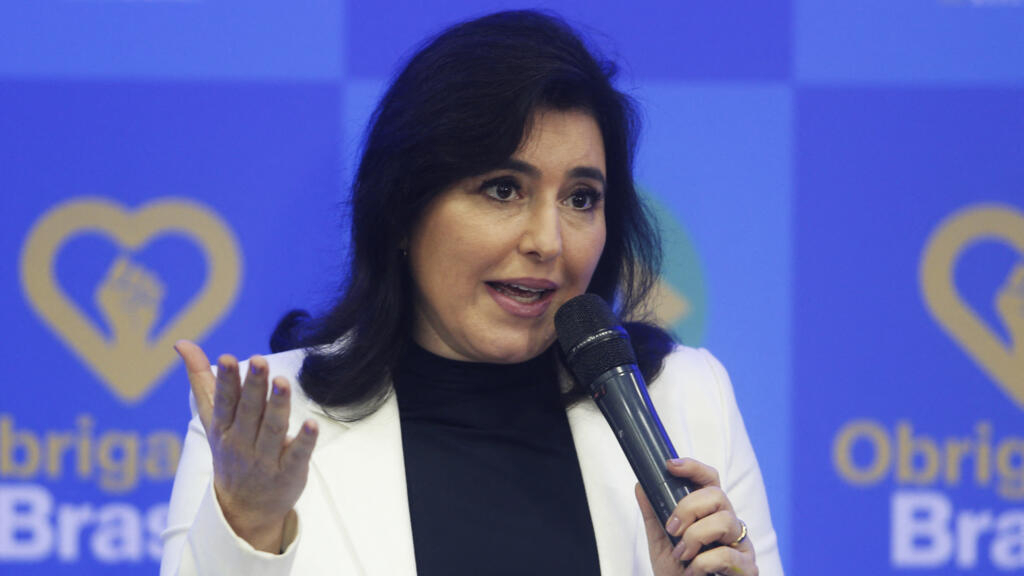 Published on: 06/10/2022 – 07:51Modified on: 06/10/2022 – 07:53 In Brazil, Senator Simone Tebet, third in the first round of the presidential election and who weighs nearly five million votes, has announced on Wednesday his support for Lula against Jair Bolsonaro in view of the second round of voting, scheduled for October 30. Luiz Inacio Lula da Silva can count on the support of center-right senator Simone Tebet. Very courted after obtaining the third score of the first round of the Brazilian presidential election (4% of the vote), she announced, Wednesday, October 5, her rallying to Lula (left) against Jair Bolsonaro (extreme right). “I will vote for Luiz Inacio Lula da Silva because I recognize in him a commitment to democracy and the Constitution that I do not recognize in President Bolsonaro, said Simone Tebet, 52, during a speech to the press in a hotel in Sao Paulo. “I will not vote blank, to be neutral would be to sin by omission”, added this fervent Catholic, while her party, the MDB, had not given instructions, preferring to let its members “follow their conscience”. Pelo meu amor ao Brasil, à democracia e à Constituição, pela coragem que nunca me faltou, não anularei meu voto, não votarei em branco. +— Simone Tebet (@simonetebetbr) October 5, 2022 Useful vote The senator, who weighs nearly five million votes, however criticized the former left-wing president (2003-2010) for having “called for a useful vote without presenting proposals concrete in the face of the real problems of Brazil”. But she especially fired red balls on the balance sheet of Jair Bolsonaro. “For the past four years, Brazil has been abandoned to hatred and discord. Denial has delayed the purchase of (anti-Covid) vaccines, weapons have taken the place of books,” said this trained lawyer. Last year, she played a central role in the Senate Commission of Inquiry which issued a damning report on the government’s handling of the pandemic. Lula recorded another strong support on Wednesday: that of his predecessor for the presidency, Fernando Henrique Cardoso (center right, 1995-2002). “FHC” announced on Twitter that he was going to vote for his opponent in the presidential elections of 1994 and 1998, who, according to him, embodies “the fight for democracy and the ‘social inclusion’.Vote ‘for democracy’Thank you for your vote and your trust. Brazil needs dialogue and peace”, replied Lula on the same social network. A week before the first round, “FHC” had called to vote “for democracy”, but had not mentioned the name of the ex-president of the left. Lula obtained 48.4% of the vote on Sunday, ahead of Bolsonaro, whose score was better than expected, with 43.2%. The far-right president garnered significant support on Tuesday, in particular that of former anti-corruption judge Sergio Moro, his ex-Minister of Justice, who had nevertheless resigned with a bang in 2020. Jair Bolsonaro was also supported by the governors of the three most populous states in the country: Sao Paulo, Minas Gerais and Rio de Janeiro (south-east), to which were added, on Wednesday, those of Parana (south) and the Federal District of Brasilia (center-west).Discover the webdoc dedicated to the presidential election in Brazil © Studio Graphique France World Media With AFP

1 thought on “Presidential in Brazil: Simone Tebet, 3rd in the first round, will vote Lula”