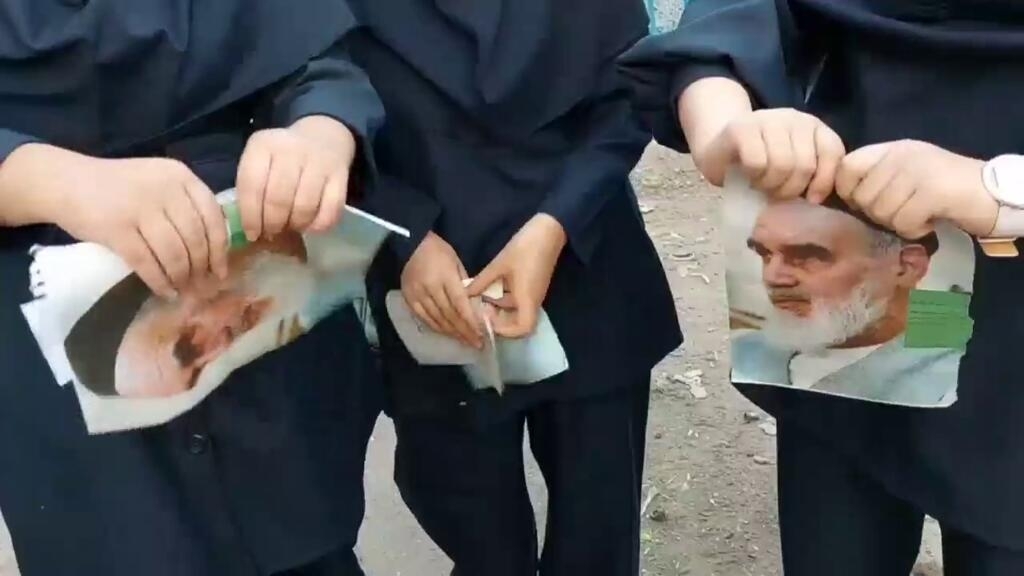 Published on: 05/10/2022 – 18:55 The protest movement that has been shaking Iran for several weeks has made its way into high schools in parallel with the start of the new school year in October. Videos posted on social networks show high school students protesting, including several young girls. They stage themselves chanting slogans, pounding the cobblestones or removing their veils in the playgrounds. A movement seen as a defiance of social norms, which the police are severely trying to silence. They chant “Death to the dictator!” or “Woman! Life ! Freedom !” : These girls and young women have been at the forefront of continuous protests in Iran since September 16. As the return to school begins on October 2 in Iran, the protest movement is in turn reaching the country’s high schools. On October 3, in a city near Tehran, an official from the Ministry of Education gave a speech in a high school, insisting on the importance of the Islamic veil. A group of young girls replied: “Shame on you!” then threw projectiles at him before chasing him out of school. The same scene was repeated in another school in the center of the country: a representative of the Basij forces, a paramilitary branch of the Islamic Revolutionary Guards, spoke with a group of high school girls. They brandished their veils, shouting at him to look elsewhere. بسیجی رو آوردن تا برا برای دانش آموزان
سخنرانی کنه و پاسخ دانش آموزان:
بسیجی برو گمشو#مهسا_امینی#نیکا_شاکرمی pic.twitter.com/vsttldvhve— ☀️👑من یک آرشaffe give a speech on October 4 at a high school in central Iran. The wave of protest has generated a movement hostile to the compulsory wearing of the Islamic veil and its rigorous imposition by the Iranian “moral police”. Mahsa Amini, a 22-year-old woman, died after being arrested by the same police. His crime: dressing “indecently”. READ ON THE OBSERVERS >> ‘I will never wear the veil again’: Anger grows in Iran after the death of a woman arrested by morality policeThe movement has evolved rapidly, involving more general demands, accompanied by a anti-diet sentiment. At a school in Razavi Khorasan province, high school students stomped on portraits of the current Ayatollah, Ali Khamenei. Others shattered photos of the Supreme Leader or gave the middle finger to his portraits adorning their classroom walls. Still others chanted “Death to the dictator!” in the schoolyard. با اختلاف بهترین ویدیودانش آموزان خراسان رضوی: «تجاوز، جنایت، مرگ بر این ولایت»#مهسا_امینی pic.twitter.com/w7uznxKs52— cheshm_abi (@chawshin_83) October 4, 2022 Dans un lycée du nord-est iranien, des lycéens ont piétiné photos of the current Ayatollah as well as portraits of his predecessors, October 4, 2022. High school students demonstrate in the streets of a city outside Tehran, October 4, 2022. High school students in a city outside Tehran chant “ I will kill whoever killed my sister!” October 4, 2022. High school girls in a city outside Tehran wave their headscarves in the air in protest. Video filmed on October 4, 2022. However, these “acts of defiance” can have serious consequences. Iranian security forces, including the fearsome Basij, violently repress the demonstrations with live ammunition, tear gas and truncheons. Women and girls have been particularly targeted. READ ON THE OBSERVERS >> Iran: Protesters respond to police repression, never before seen The repression has even claimed victims among the teenagers who joined the protest movement: Nika Shahkarami , 16, disappeared the night of September 20 after taking part in a demonstration in Tehran. According to BBC Persian, she was found dead four days later. The same source indicates that the authorities sought to bury him discreetly in order to avoid reigniting the demonstrations. At least 154 protesters have died since the start of the protest, reports the organization Iran Human Rights.