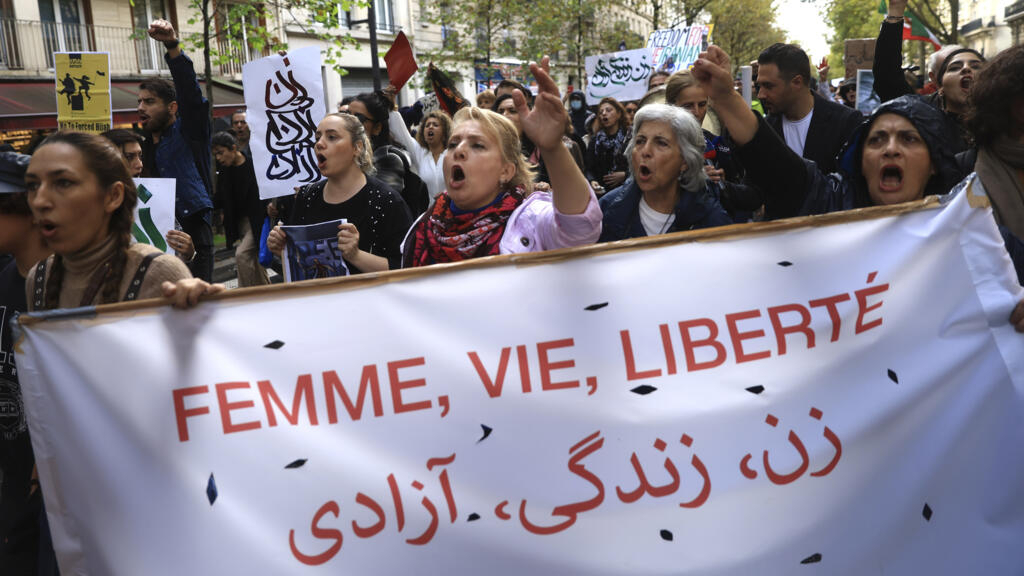 Published on: 02/10/2022 – 22:00 Several thousand gathered in the streets of Paris on Sunday to condemn the repression that is raging in Iran, more than two weeks after the death of the young Kurd Iranian Mahsa Amini. According to the NGO Iran Human Rights, at least 92 people have been killed by the crackdown in Iran since the beginning of the movement in support of Mahsa Amini. Toronto, Los Angeles but also Paris. Thousands of people marched in Paris on Sunday, October 2, to condemn the repression in Iran of the demonstrations triggered by the death of the young Mahsa Amini, arrested by the morality police. Like their counterparts in Los Angeles, Toronto, also high places of the Iranian diaspora, the activists marched from Place de la République to Place de la Nation, the traditional route of the great Parisian movements. Under some intense showers, the demonstrators chanted the slogans “Join the first feminist revolution!” and “Mahsa Amini, your name has shaken the tyranny of the ayatollahs”. “Death to the Islamic Republic”, “Death to the dictator” and “Woman. Life. Freedom”, the code of demonstrations in Iran, were also heard. In Iran, at least 92 people have been killed in the crackdown on protests At least 92 people have been killed in Iran by the crackdown on protests that erupted two weeks ago after the death of Mahsa Amini, arrested by the morality police, according to the NGO Iran Human Rights (IHR). President Ebrahim Raisi has again accused Iran’s “enemies” of “conspiring” against his country, saying their attempts had “failed” as the largest anti-government protests since 2019, have continued.>> To read: French feminists mobilize for Iranian women who demonstrate The protest movement was sparked by the death on September 16 of the young Iranian Kurd aged 22, three days after her arrest for violation of dress code of the country which obliges in particular the women to wear the veil.”For once, the women rise up and are accompanied by the men. come out, but they get killed. We are lucky to be able to demonstrate and fight for them. So we will come,” said Guilda Torabi, a student of Iranian origin. “Iran has become a big prison” “Now Iran has become a big prison. The Internet is cut and we are now the voice of the Iranians”, denounced Toura Dana, a Franco-Iranian engineer. LFI (radical left) MEP Manon Aubry took the floor, covered by whistles from an Iranian diaspora known for its political diversity. The demonstrators also protested when the recent meeting in New York, in margin of the United Nations General Assembly, between French President Emmanuel Macron and his Iranian counterpart Ebrahim Raïssi. “The French government is flirting with the Mullahs while the Mullahs are killing women”, denounced a slogan next to a photo two men shaking hands With AFP

1 thought on “In Paris, thousands of people demonstrate against the repression in Iran”