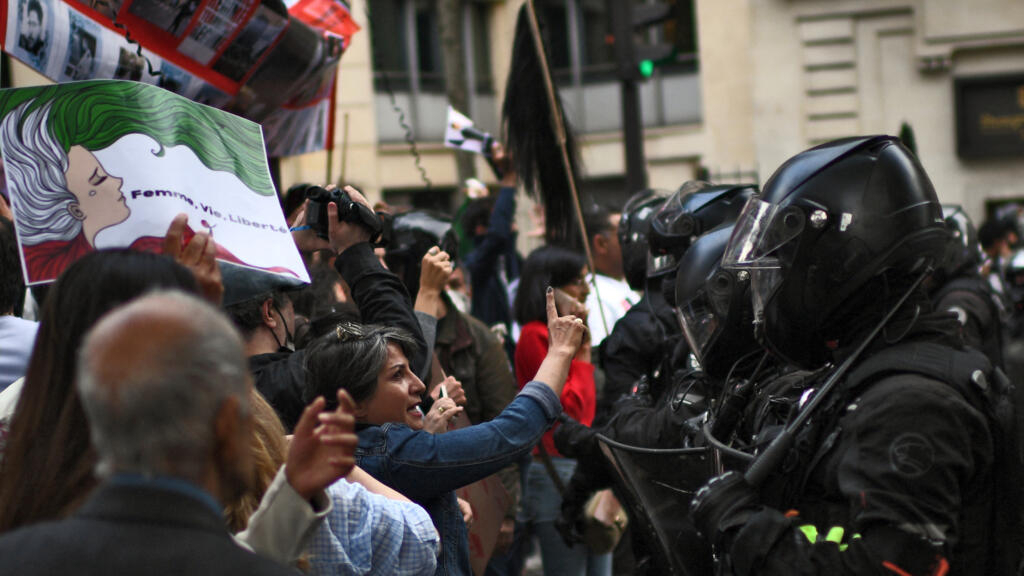 Published on: 09/26/2022 – 07:37 Demonstrations in support of the Iranian people are multiplying internationally to protest against the death of Mahsa Amini, arrested by the morality police for wearing her veil “inappropriately” . In Paris, police used tear gas to prevent protesters from reaching the Iranian embassy, ​​and in London clashes broke out between police and protesters. Hundreds of people marched on Sunday, September 25, in Paris and London to denounce the death of Mahsa Amini, 22, arrested in Tehran on September 13 by the morality police for “wearing inappropriate clothes” and to protest against the repression of protests in Iran. In Paris, the demonstration degenerated, the French police used tear gas to prevent the procession from reaching the embassy of the Islamic Republic. Another tense rally took place in London near the Iranian embassy. “Protesters tried to cross the police roadblocks and threw projectiles at the officers,” British police said in a statement, reporting five arrests. “in the face of growing repression by the morality police”France, silence is enough”Leaving from the Place du Trocadero, the Parisian procession headed for the Iranian Embassy to the sound of slogans such as “woman, life , freedom!”, echoing those of the demonstrators in Iran, or even “France, silence is enough”. on September 20 on the sidelines of the United Nations General Assembly in New York. As they approached the embassy, ​​police repeatedly used tear gas to repel protesters who tried to cross their cordon prohibiting the access to representation diplomatic ion of the Islamic Republic, according to the same sources. “In view of what is happening now, we Iranians are really mobilized, we must react given that we are far from our homeland, our country,” said a Franco-Iranian protester who did not wish to identify herself. only by her first name, Nina. Iranian embassy in London. According to London police, officers were deployed near the embassy, ​​while “large gatherings” had taken place in recent days in the calm in the British capital. Videos on the networks Socials notably showed a crowd chanting “death to the Islamic Republic”. While the “majority of those present at the embassy on Sunday continued to behave responsibly”, a “significant” group “sought to attack the police and protesters with whom they were not OK,” Scotland Yard said in a statement on Sunday evening. Law enforcement units equipped with helmets and shields have been deployed, London police continue. The incidents first broke out near the embassy. before moving towards the districts of Marble Arch and Maida Vale, where the Islamic Center of England was “targeted”. At least five members of the security forces have been hospitalized, including for broken bones, according to the police, who made 12 arrests for participating in violent disorders. “We respect the right to peaceful demonstration and always work with the organizers to make that possible. But we will not tolerate attacks on our officers like we have seen today or protests that leave other communities feeling insecure,” said Karen Findlay, London Police. .At least 41 people have been killed and hundreds arrested in Iran since the announcement on September 16 of the death of Mahsa Amini, according to the latest official report. With AFP

1 thought on “Demonstrations of support for the Iranians: overflows in London and Paris”