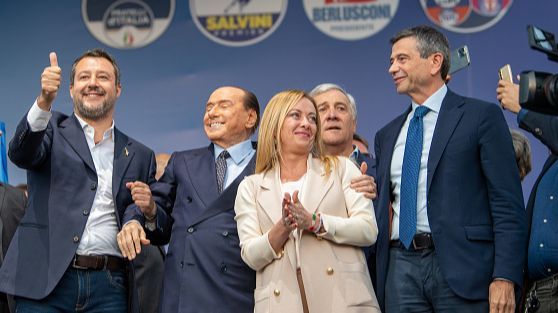 These generals make the Brothers of Italy the first party in the countryGiorgia Meloni may become the new Italian prime minister in the coming weeksThe great fall of Matteo Salvini and the success of the M5S in the south collaterally mark the electoral nightItaly has voted this Sunday 25th September in what many agreed were the most important elections in recent decades. The right will govern in Italy and will do so with the party of the right-wing Giorgia Meloni in command after being the political party with the most votes, surpassing, according to the latest counts, 26% of the votes. A fact that entrusts the fundamental weight of the future Executive to his party, Brothers of Italy, which will govern with the conservative coalition that he shares with Matteo Salvini’s League and Silvio Berlusconi’s Italy Force, both below 10% of the votes. The elections, which lasted from 7 a.m. to 11 p.m. and were held in 61,000 electoral sections throughout the country, confirmed abstention data, not only higher than in 2018, but historically remarkable with an influx to the polls that has remained at 63.9%, the lowest since 1948. Data marked above all by disenchantment with politics and the lack of voting by mail for nationals living in other regions. In short, more than 51 million Italians, 5 of them living abroad, who were called to the polls and who have designed the new Italian Parliament. Meloni’s victory opens the formation of a government for the center right, which has an absolute majority. Her position as the first party and as leader of the coalition places her as the first candidate for prime minister, the agreement between the three conservative leaders is that the party, of the three, that obtains the most votes, has the power to appoint the first Minister. The right has not governed in Italy since 2011 and this, due to Meloni’s representativeness, will be the most conservative Executive in the history of the Republic. In the coming days and weeks, the agreements to form a government will outline the cardinal points of the conservative Executive which, economically, will inherit the Draghi agenda linked to the European recovery funds after the pandemic (PNRR in Italian). The election of the government team will be essential to understand if Meloni’s line is in line with the former president of the ECB or his own model. ELEZIONI 2022 | The victory of the centrodestra is the breaking news on its international site. “The extreme destra vince le elezioni italiane e Meloni è in procinto diventare la prima donna premier” says the BBC. “Il partito post-fascista di Meloni in testa” says France Presse #ANSA pic.twitter.com/jw7e4MY1vi— Agenzia ANSA (@Agenzia_Ansa) September 25, 2022 Giorgia Meloni, after months leading the polls and with a political profile that It grew after three Executives, the two Governments of Conte and the consensus Executive of Mario Draghi, of which he refused to be a part, he became the great option of political opposition in Italy. His party, Brothers of Italy, created from the embers of the post-fascist Italian Social Movement, a political formation in which Meloni began his militancy, had 4% in Parliament in 2018 and grew during these four years like the foam while his partner of coalition, Matteo Salvini of the League, went down without brakes. She lowered that has been confirmed in these elections in which she has obtained 9%, a figure that for many compromises the survival of the leader. This is also the case for the result of PD, the main center-left party, which with 19.5%, despite being the second party, will have to settle accounts with its general secretary, Enrico Letta. The data is also low for Silvio Berlusconi’s Fuerza Italia with 8.1% and, better than expected, for Giuseppe Conte’s M5S, which recovers strength after months where the polls gave a dismal result, it remains with 15%. The Terzo Polo, led by former Prime Minister Matteo Renzi and Carlo Calenda, enters Parliament with 7.7%. Another fact that was symptomatic was that of the low influx to the south, which had been a fiefdom of hope in recent days for the left with the possibility of compensating for the vast majority that was expected for Giorgia Meloni. The weather, the Italian media indicate, has been an important factor in the southernmost Italy, which yesterday suffered torrential rains that worsened voting conditions. The long queues, however, throughout Italy, seem to be explained by the great delay generated by the new voting system that provided for an “anti-fraud barrier” in which the process of introducing the ballot box vote was largely supervised. In addition to another great factor that has been discussed at length during the campaign: the electoral law. The ‘Rosatellum’ favors coalitions, it has rewarded, the data indicates, the winning party, Brothers of Italy. In the street, during the day of the elections, the social thermometer of the electoral colleges marked two great opinions: that of fear of a right-wing government of the left and that of the moment of a prime minister elected at the polls, and not technical as in recent years, Italy has made -the country has not had a PM elected at the polls since Silvio Berlusconi won in 2008-, an argument defended by the right. This second idea won at the polls. Despite the fact that a great common denominator dominated the conversation on the street: the detachment from politics that many repeatedly define in a “everyone is equal”. Meloni’s great obsession, she said in her first words after her victory, is precisely to regain credibility in politics. Meloni’s name sounded and sounded in the queues of those waiting to vote throughout the country and, both left and right, for many it was clear that she was the protagonist of these elections.