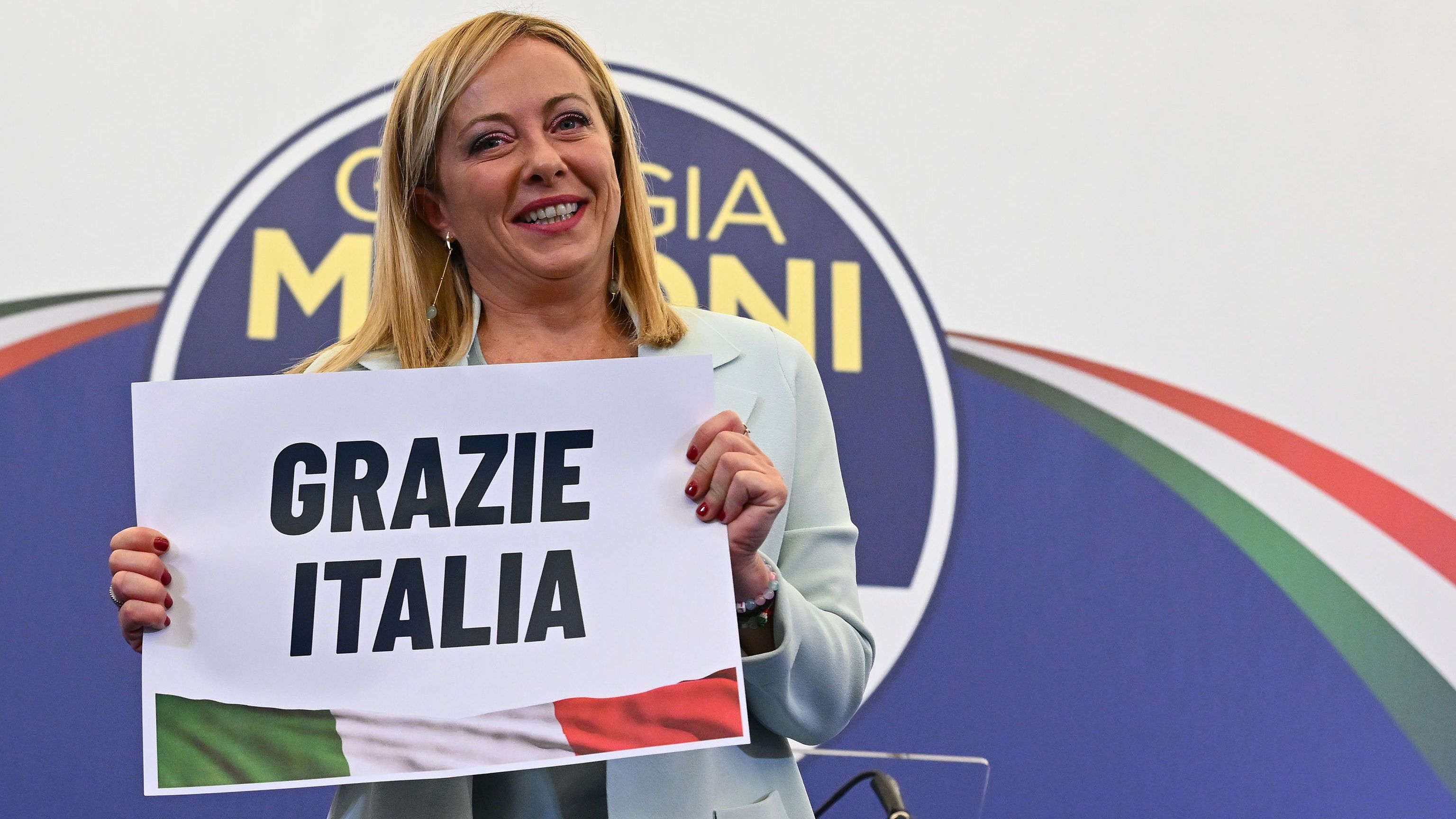 The right-wing leader has led her party, Brothers of Italy, to become the first party in Parliament The center-right must form a government after obtaining an absolute majority at the polls Before a room full of national and international journalists Meloni was conciliatory Giorgia Meloni arrived with the typical Italian ritardo, but it wasn’t his fault. The closure of schools at 11 p.m. and the vote count, which began to release reliable results from two in the morning, delayed her long-awaited speech. The woman who started in politics at the age of 15 and found, as she tells it in her autobiography ‘Io sono Giorgia’ (I am Giorgia), a family in political militancy in the post-fascist National Alliance, managed to take her party to the top . In 2018 she had a marginal role in Parliament, she only got 4% of the votes. Today it has become the first party in Italy, with 26%, and will lead the formation of a center-right government with Matteo Salvini and Silvio Berlusconi. A stratospheric rise, which Italy has already seen in the past with the Salvini League and with the M5S, and which has now “moved” the vast majority of votes to this extreme right-wing party. The venue, at the Gran Hotel Parco dei Principi in the center of Rome, a stone’s throw from the famous Villa Borghese park, one of the city’s great tourist attractions, showed the great display prepared by the party. The eyes of the world, more than 400 national and international journalists accredited for the election morning, awaited in that enclave the first words of the right-wing leader who has been at the head of the polls for so many months. It was also the same hotel chosen by the M5S to follow the electoral results in 2018 in which they obtained 33% and forever changed the history of the country. A choice that does not seem casual. Her words also marked the beginning of a new era for many Italians and, without a doubt, were symptomatic of the tone that Giorgia Meloni will use if she becomes prime minister in the coming days. She entered the room to the rhythm of Rino Gaetano, visibly moved and with a new haircut that some rightly call “more institutional”. She thanked each other and criticized a campaign in which she has felt attacked. She did not stop looking, yes, towards the horizon in which she intends to govern for all Italians and rebuild, that is her great ambition, the trust of citizens in politics. In her speech she also wanted to make it clear that she will govern “for all Italians” and that her intention was to unite the country. She thus recognized herself before that room as the new first party in Italy and marked her own, her political leaders sitting in the front rows and they too enthusiastic, between hugs and kisses, a great responsibility. “From tomorrow we have to show our courage, this is the time of responsibility and this is the time when if you want to be part of history you have to understand the responsibility we have with millions of people. Italy has chosen us and We are not going to betray her like we have never done before,” he said. There has been a lot of talk about his “moderation” in recent weeks. Experts said it was a political strategy to make herself look like a more reliable candidate for international powers. A position that she had to emphasize, more moderate, more Atlanticist and more Europeanist, after her speech with VOX in Spain, especially violent and which she herself regretted in terms of forms and which also raised an alarm in the press. international. The professor of politics at the LUISS University Vincenzo Emanuele points to a deeply conservative political proposal on the part of Meloni, but he considers her a pragmatic leader who is clear that she will have to accept pacts to guarantee her durability, especially in the negotiations with her partners Salvini and Berlusconi. On the other hand, Flavia Carlini, political disseminator on social networks, warns about Meloni’s double vein that, she says, characterizes her speech in which “everything and the opposite is said to maintain a balance” but that does not guarantee agreements. Internally Giorgia Meloni will try to mark a line that tries to differentiate her and that will build her own profile in the institutions. She will maintain her rebellious spirit, several experts point out, and will mark ground with the election of her ministers, if she eventually becomes premier. Alessandra Bocchetti, historical intellectual of feminism, speaks about her rebellion. “Giorgia Meloni is a rebel and like all rebels she is very attractive, but she does not stray from the patriarchal path. Her values ​​are what founded the patriarchy. God, Country and Family Giorgia Meloni writes them with capital letters, for her they are institutions in themselves, ”she says. It thus remains to be seen, as some of its leaders expressed, if the measures they have proposed have a real space in politics. During the day on Monday, the far-right leader is expected to speak to the media again for a more complete analysis.

1 thought on “Giorgia Meloni after winning the elections: “Italy has chosen us and we cannot fail””