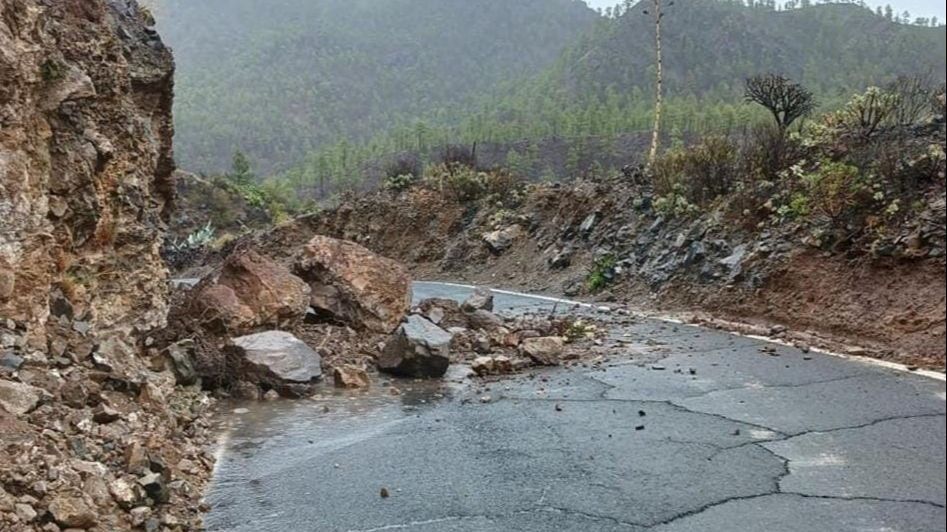 Landslide in Gran CanariaCREDIT BY THE COUNCIL OF GRAN CANARIAThe island of Gran Canaria has registered up to 12:00 noon this Sunday rainfall that has reached 90 liters per square meter in the capital, 100 liters/m2 in areas of middle and highlands and up to 120 liters/m2 in Artenara. This has been reported by the Cabildo, which adds that these rains have led to numerous incidents, mainly on the road network with road closures. In this way, the following roads are currently closed: GC-200 (Agaete-El Risco road), GC-210 (Artenara), GC-310 (La Calzada), GC-231 (which connects Agaete with the Valley), GC-231 (access to Sao ), and the GC-800 (Marzagán). In addition, at approximately 12:30 there was an accident due to landslides on the GC-2, at the height of the tunnels located before the Barranco de Moya. The president of the Cabildo, Antonio Morales, has indicated that currently the rain exceeds 120 liters in the Artenara area, “which is good news because it is getting water to the dams.” “The incidents in general are minor, especially landslides and some roadblocks. Right now there is a deployment of almost 1,000 people throughout the island to minimize the damage”, he explained. For its part, the Gran Canaria Consortium for Emergencies has had to intervene in traffic accidents, without consequences, and most of its actions consist of technical assistance from bilge, removal of risk elements and incidents in electrical panels.