Tesla Bot: Elon Musk presents a humanoid robot of the future with the AI ​​of a Tesla

At an event dedicated to artificial intelligence, Elon Musk presented the Tesla Bot project. It is not a vehicle, but a robot resembling a human being. 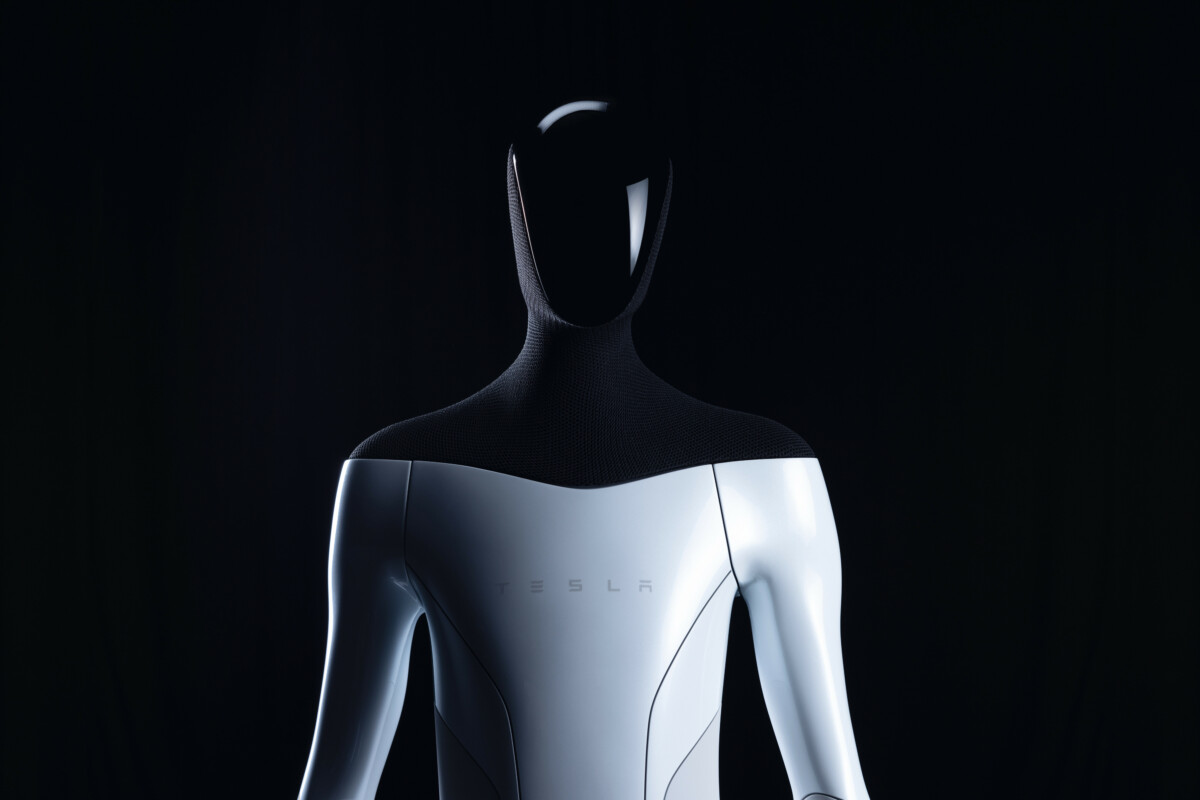 We pass on the design

During the presentation, the boss of Tesla detailed some characteristics of his Tesla Bot. Let’s not dwell too much on the design which, we hope, will be able to evolve between now and the release to stick a little less with a dystopia and a little more with a warm product. 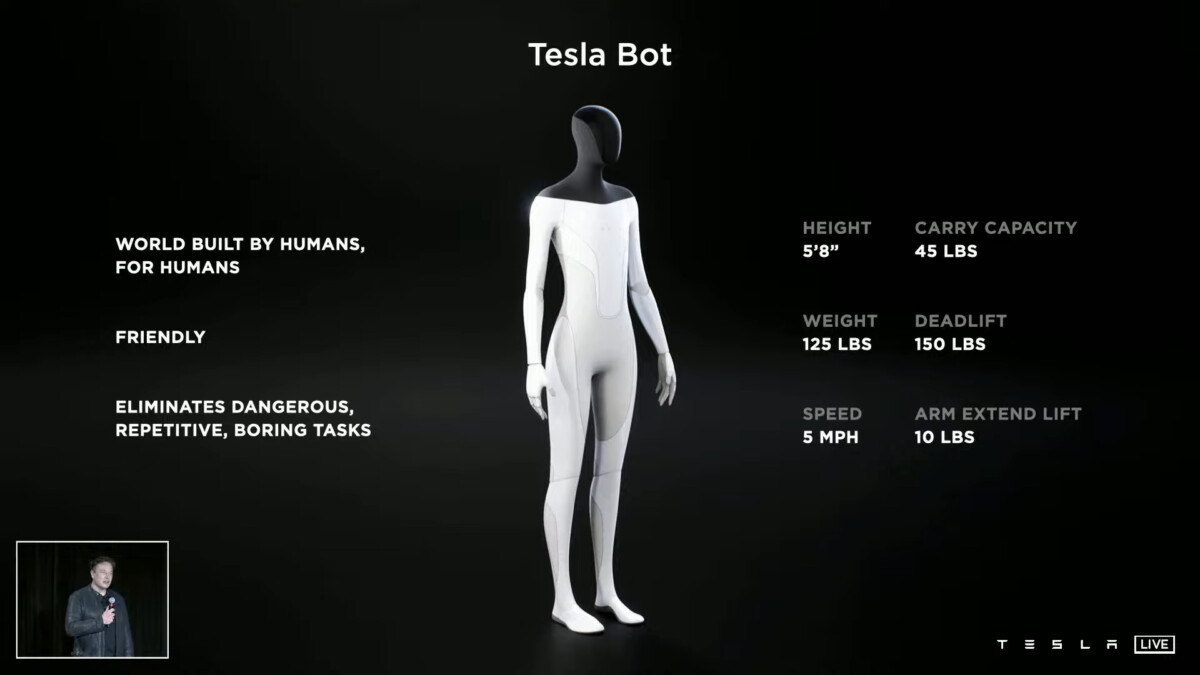 The Tesla Bot must above all meet the needs of a world created by and for humans without motor disabilities: climbing stairs, carrying things, entering buildings. The goal is to be able to replace humans on repetitive tasks. Always convinced by his presentation and his idea, Elon Musk imagines a world where physical labor becomes a simple option that we choose or not. You only need to have seen a science fiction film to quickly understand the idea.

According to the characteristics presented, the Tesla Bot measures 1.73 meters for 56.7 kilograms and a capacity to carry 20 kg. He will be able to lift a load of 68 kilograms or 4.5 kg at arm’s length. Its speed will be 8 km / h.

The components of a Tesla

To produce this robot, the businessman wants to reuse the components already used in a Tesla vehicle. In particular, he wants to integrate the autopilot’s cameras into the head of the robot, the FSD computer, which is already found in the brand’s cars. 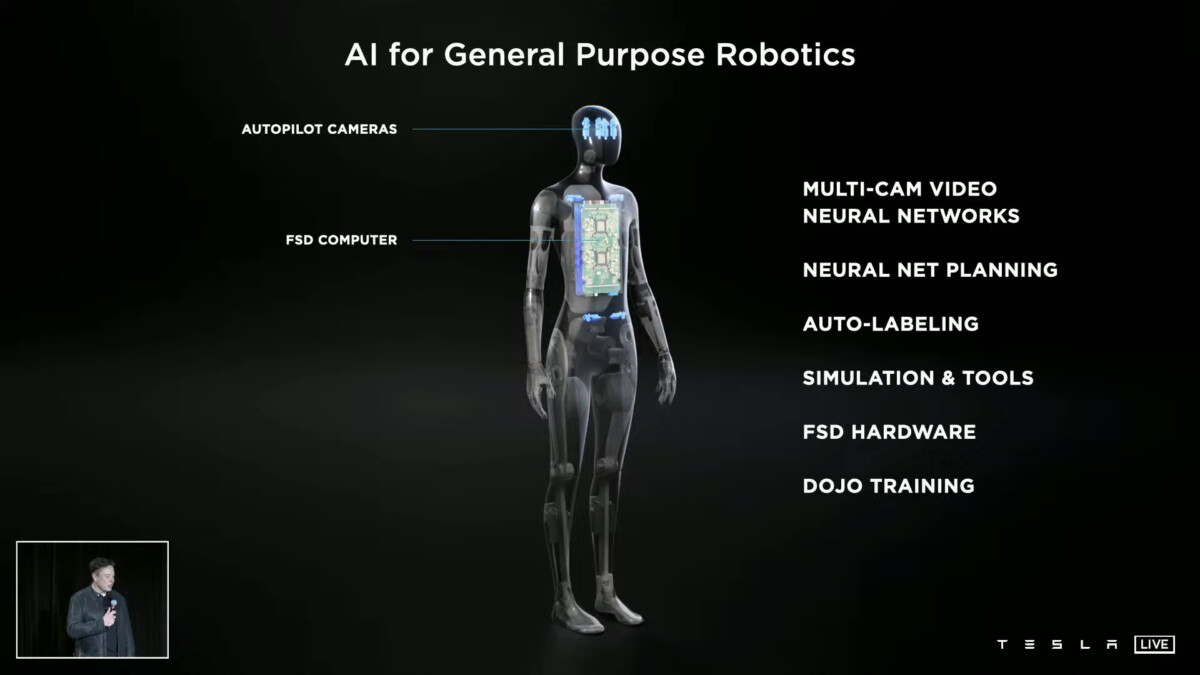 We imagine that it is not simply a question of reusing production lines and components, but also, and above all, of relying on and developing the software developed for Tesla vehicles. The rules of navigation will be different, but some bases will be common. We hope that the robots will not start running on the road.

Elon Musk has never hidden his fear of moving to AI. The man who believes that “Humanity 10% chance of survival against AI” indicates, however, that the Tesla Bot will be unequivocal on the side of the good. To reassure the public, he also promised that it would be easy to go faster than a Tesla Bot and be stronger than him. 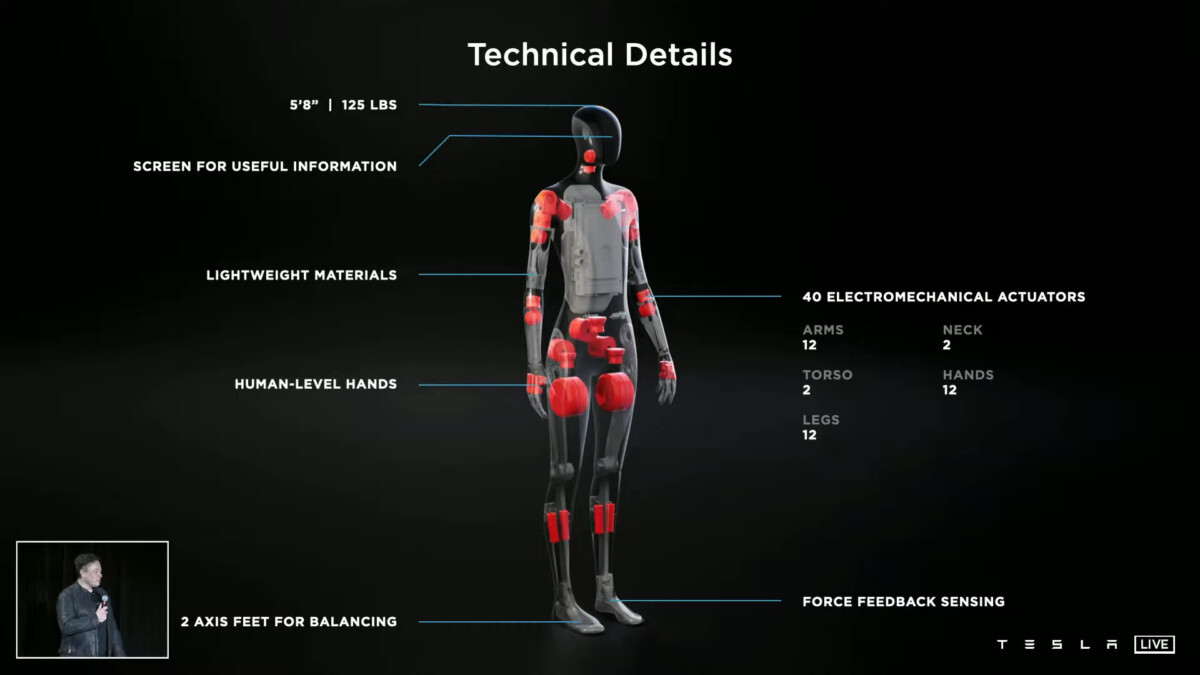 Take a step back

The presentation of the Tesla Bot is impressive and this is the goal. With the finances of Elon Musk and Tesla, we can also imagine a real effort for the project. However, we must take a step back on the feasibility and timing of such a project. According to Elon Musk, a simple prototype could be ready as early as 2022.

However, keep in mind that Elon Musk did not invent the idea of ​​making a robot. Many firms have been working on this kind of project for a long time. We remember the robots of Honda or Toyota in particular. For the moment, no one has managed to create the robot for everyone who can replace us for shopping or carrying heavy things.

They decree house arrest for Marina Ovsyannikova, the journalist of the cartel against the invasion of – El Mundo

This is why the FBI raided Trump's residence 0:50 (CNN) -- The FBI raid of former President Donald Trump's...

The coalition crisis is in full swing, the party presidency sends a message: Matovič will not resign, no matter what happens – Nový Čas

The leader of OĽANO, Igor Matovič, will remain the Minister of Finance even after the ultimatum from the SaS...

They decree house arrest for Marina Ovsyannikova, the journalist of the cartel against the invasion of – El Mundo