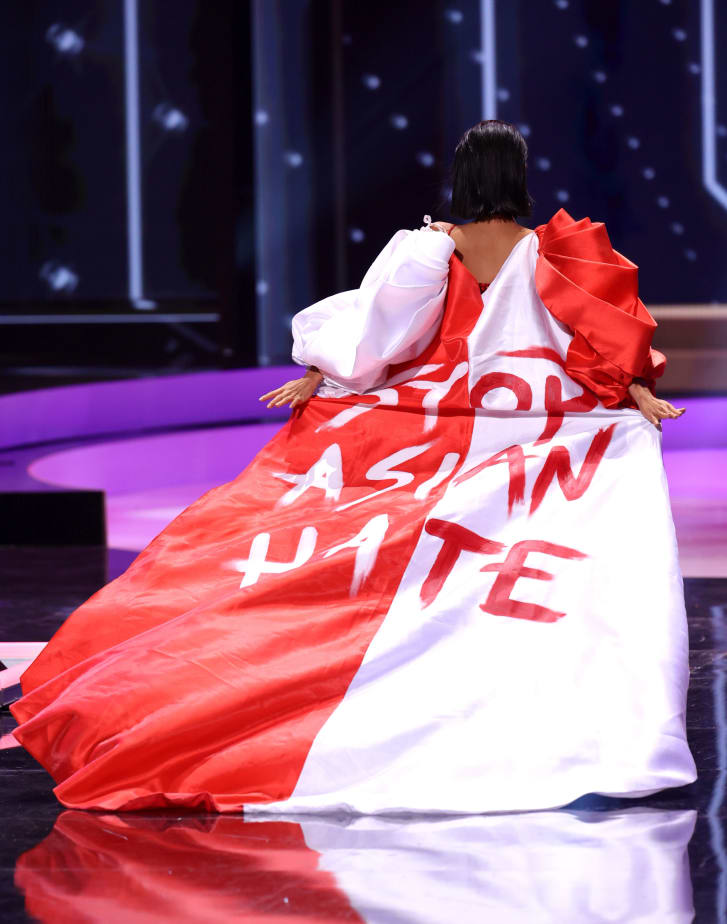 (CNN) – The setting of Miss Universe 2021 was lit up with colorful protests as contestants from Singapore, Uruguay and Myanmar took advantage of the spotlights to display messages on political and social issues.

During the “costume” segment of the annual competition, which concluded Sunday in Florida, the three contestants revealed messages that alluded to anti-Asian hatred, discrimination against LGBTQ communities and the current political crisis in Myanmar.

In one of the most dramatic moments of the pageant, Miss Singapore Bernadette Belle Ong walked the runway in an outfit inspired by the colors of the Singaporean national flag before turning around to unveil a call to ‘Stop the Hate of Asians’.

Instead of using her dress to carry her message, Miss Myanmar, Thuzar Wint Lwin, revealed hers on a small scroll. Taking the stage in intricately embroidered and beaded garb, she bowed to the audience before revealing a call for viewers to “pray” for their country.

It is not the first time that Thuzar Wint Lwin has expressed solidarity with protesters opposing Myanmar’s military junta, which took power in a coup in February.

With the outbreak of violence across the country, more than 700 protesters have died and thousands more have been arrested, according to the Association for Assistance to Political Prisoners. In March, the beauty queen took to Instagram to honor the protesters as “heroes who sacrificed their lives in the fight for the freedom of our people,” having previously accused the Myanmar military of human rights abuses.

Don’t forget to vote for your favorite costume at https://t.co/isjijntrRM. Voting closes at 11:59 pm on 5/15. pic.twitter.com/EWCq2fM9CD

After the ‘typical costume’ segment, which she won, Thuzar Wint Lwin posted an image of her holding the protest sign alongside the caption ‘Brave Empress’.

Singaporean contestant Ong also posted a series of images of her outfit on Instagram, saying it was her responsibility to “send a strong message of resistance against prejudice and violence” directed at Asians.

The protest comes amid a surge in anti-Asian sentiment around the world. Researchers at California State University, San Bernardino, recently reported a 164% increase in hate crimes against Asians in 16 of the largest cities and counties in the United States.

So many impactful pieces from this year’s delegates!

Don’t forget to vote for your favorite costume at https://t.co/isjijntrRM. Voting closes at 11:59 pm on 5/15. pic.twitter.com/2gCet6Rf9x

Ong’s sparkling bodysuit, complete with puff sleeves and thigh-high boots, was made by Filipino designers Arwin Meriales and Paulo Pilapil Espinosa in just two days, she wrote on Instagram.

Uruguayan De los Santos, who paired her daring rainbow outfit with a floral crown and black boots, has long been a staunch advocate for LGBTQ rights.

In addition to frequently posting messages of solidarity on social media, she was a judge in Miss Trans Star Uruguay, a beauty pageant for transgender women.

Mexican contestant Andrea Meza was crowned the overall winner of this year’s Miss Universe, which took place in Hollywood, Florida.