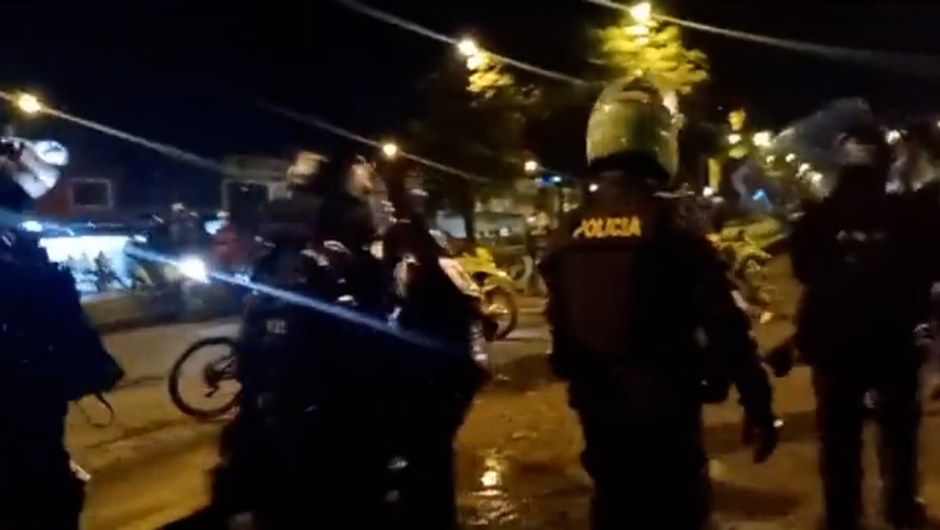 (CNN Spanish) – In Colombia, the Office of the Attorney General of the Nation opened this Friday a preliminary investigation against members of the National Police for the alleged retention, sexual assault of a 17-year-old minor in Popayán, department of Cauca, who would have taken her own life one day after being retained.

The arrest in question occurred last Wednesday in the framework of the protests that have been taking place in the country for several days. According to images captured by the local media Red Alterna, several agents try to arrest the girl and apparently there is a struggle of approximately 6 minutes.

At times an agent is observed pulling the teenager, who asks to be released. “Let go of me,” he yells several times. Elsewhere, between two and four officers are observed to hold and carry her until she is finally admitted to an Immediate Reaction Unit. “Four (police) for a woman,” the teenager shouts shortly before being admitted to the station.

The case has caused dozens of people to come to protest this Friday in front of the place where the teenager was held, according to Colombian media. Protesters reportedly tried to burn down the station.

The Colombian Attorney General’s Office also announced that the incident is being investigated.

The investigations take place at the same time that organizations denounce on social networks, without presenting concrete evidence, that the minor had suffered sexual violence after being arrested, facts that the National Police rejects. The Prosecutor’s Office is also investigating whether there was an “illegal sexual assault” and the cause of death of the adolescent. They also reported that a “psychological autopsy” was ordered to analyze “the context of the minor’s situation.”

What do the police say?

The commander of Region 4, General Ricardo Alarcón, told CNN that the day after the incident the girl lost her life “in an apparent suicide.” He also explained that the arrest took place because a group of around 100 young people were in a “very high degree of exaltation” and had caused damage in the center of the city.

In the video of the arrest, a high presence of the security forces is observed, but not a high number of protesters. However, the video does not show what happened before the apparent struggle, so CNN cannot verify if there were violent protests prior to the incident.

In official statements, Alarcón indicated that once the young woman was arrested and it was established that she was a minor, “a protection protocol was activated, contact was made with the family and she was delivered in optimal conditions to the grandmother. maternal ”on the same Wednesday night. According to Alarcón, the institution, upon learning that the adolescent died, asked the Attorney General’s Office that, in the “shortest time possible”, the National Institute of Legal Medicine establish the cause of death.

When asked by CNN on the way in which she was detained, General Alarcón replied that the officers took the minor to the official headquarters making “legitimate use of force,” and pointed out that, parallel to the investigation by the Prosecutor’s Office, an internal disciplinary investigation was launched.

The teenager’s father “hopes there is justice”

The adolescent’s father told Colombian media El Tiempo on Friday that he “hopes there is justice” and that “everything is a matter of investigation.” He added that he will wait for the results of this.

The father, who, according to El Tiempo, is a policeman “in voluntary retirement,” pointed out that he must be cautious because he did not live with the young woman and does not know all the details of what happened.

On the other hand, in a statement published on Thursday, the Popayán Mayor’s Office for Women expressed its solidarity with the minor’s loved ones, who, according to the secretariat, “attempted against her life,” they indicated that, “before the serious accusations that surround this case, we urge the competent entities to carry out all the investigations, both administrative and disciplinary, with speed and priority, to clarify the arrest and the actions of the Police ”, they indicated.

The Institute for Development and Peace Studies (Indepaz), which monitors human rights and conflicts, said that the detention of the minor was “violent” and “illegal.” Indepaz reported in a statement that it received a complaint from the young woman’s grandmother, who had observed at home that the minor had bruises on her body. According to the publication, the young woman told him that she had been beaten and “groped.”

Melissa Velásquez contributed to this report